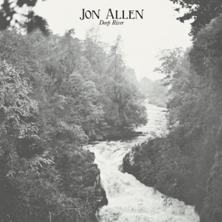 Referencing Jackson C Frank and Nick Drake is how the press release greets to describe the latest track to be showcased from Jon Allen’s forthcoming third set ‘Deep River’ due for release on monologue early July. A tall order and a lot to live up to but ‘Lady of the Water’ acquits itself admirably. In short the most elegantly beautiful thing we’ve heard in such an age, really is a class apart, indeed possessed of the bittersweet yearn and faraway forlorn introspection of Drake at his most tender and inquisitive.

‘Lady of the Water’ is a spectral magicalia softly turned in pastoral posies and brimming in bewitchment, all at once haunting and hollowed its honeyed genteelness is draped in tumbling finger picked chords whose ghostly aftertaste ought to appeal to those admiring of a shy eyed and reclining Rodriguez. The video incidentally was crafted by Akira the Don, Allen will take the album ona nationwide tour this coming fall.