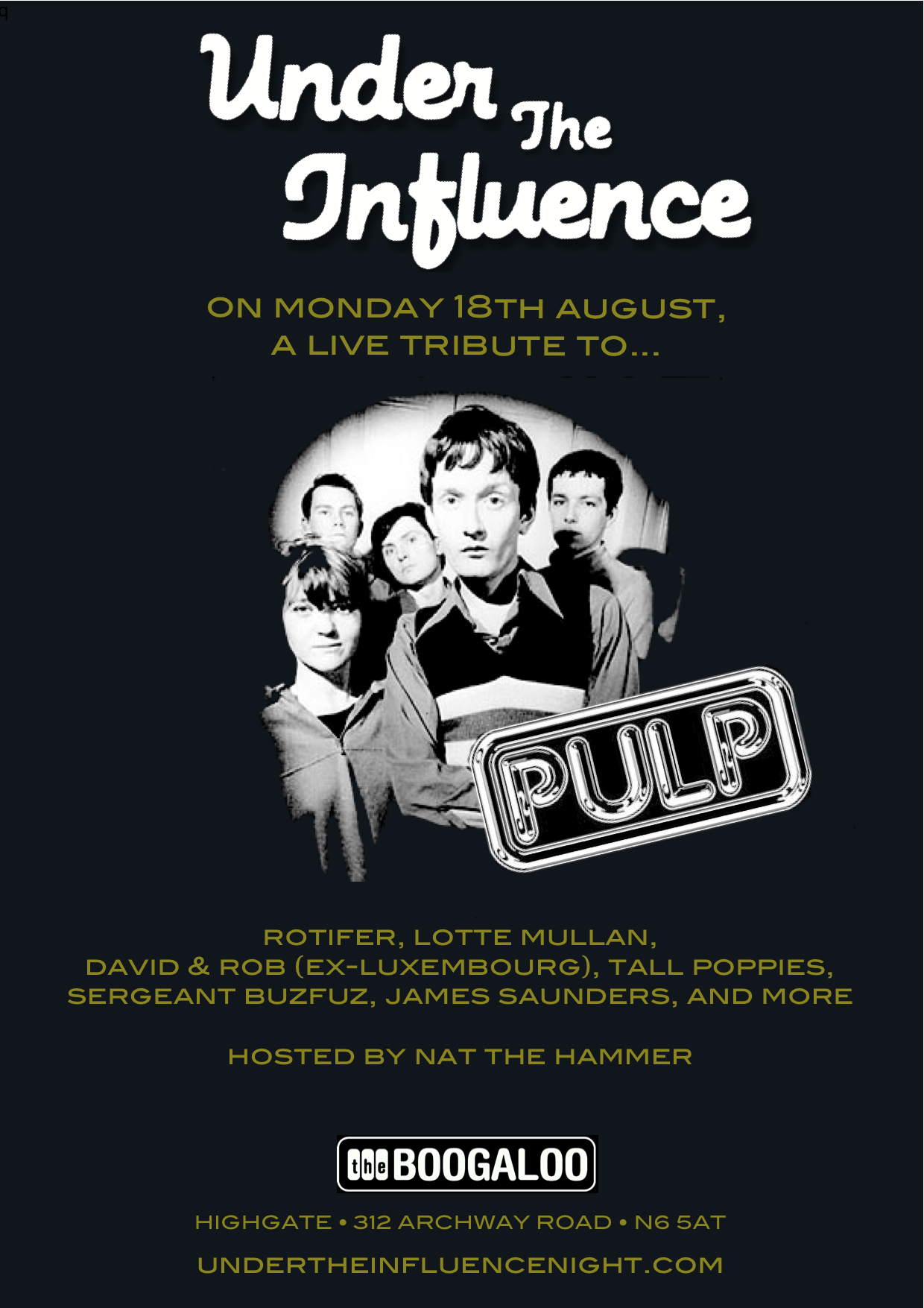 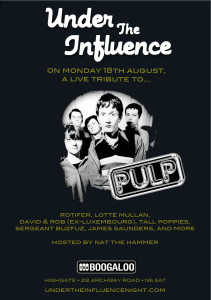 To celebrate their fourth birthday Under The Influence returns with a Pulp special on August the 18th at the Boogaloo in Highgate(full details below). Under The Influence is a London night that showcases new songwriters/bands with each act performing two of their own songs and one cover version by the featured artist of the month.

They’re also planning a full band night at the end of August and other events at larger venues. In addition to this they’re about to launch a blog and a podcast too and have started a small record label.

Under The Influence: PULP Special

Hosted by Nat The Hammer

Here’s a bit more detail about the acts performing:

Lotte Mullan
British take on Americana. Her astute and witty blog posts caused a stir and landed her a book and movie deal. New EP recorded with Band Of Horses, “Claw Marks” out now.
www.lottemullan.com

David & Rob (Ex- Luxembourg)
Luxembourg were a British five-piece indie band. For most of their life, the lineup consisted of David Shah & Rob Britton. David now sings with The Melting Ice Caps & The Soft Close-Ups and Rob performs solo as well as making appearances with acts including The New Royal Family.

Sergeant Buzfuz
South London-based Sergeant Buzfuz are based around the songwriting talents of Joe Murphy. Joe Murphy’s songs are a mixture of the pop, post-punk and folk he grew up listening to in Sheffield and the Irish story-telling tradition. Joe runs Blang records.
http://www.sergeantbuzfuz.com/

James Saunders
James makes the trip down from Sheffield for another legendary Under The Influence. His take on Prince’s “You Sexy MF” and Morrissey’s “Everyday Is Like Sunday” are two of the most talked about performances ever at UTI.

Nat The Hammer
Your host for the night and lead singer with indie band The Reverse whose debut album “Kind Words For Cruel Times” is out now. As a solo act expect witty, heartfelt narrative songs that are strong on melody and refuse to take themselves too seriously.
http://thereverse.co.uk/
http://natthehammer.com/