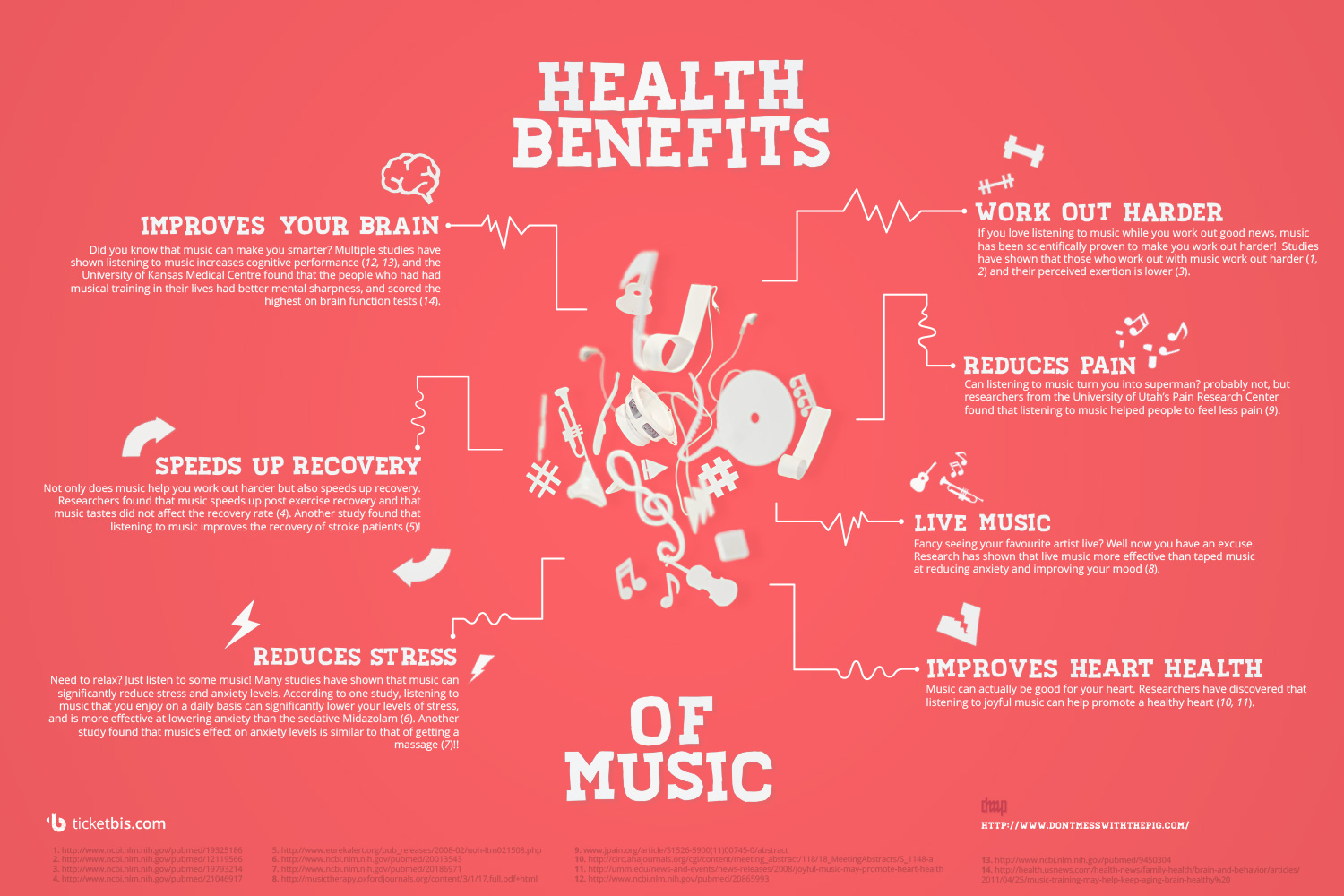 We all use music in different ways every day of our lives, to calm us down, to get us going, whilst on the move and to help us exercise, but a new infographic(which you can see below) from secondary ticketing site Ticketthis is claiming that it has ‘has been scientifically proven that listening to music has numerous surprising health benefits.’

This revealing infographic(above) lauds some interesting benefits to listening to music including reducing stress, relieving pain and improving brain power.  The infographic even claims(perhaps predictably considering who commissioned it) shows that live music is more effective than recorded music.So next time you are stuck in a Traffic Jam and your other half berates you for blaring Radio 2 out of your car stereo, or the next time your neighbour bangs on the wall when you are belting out Motorhead at full volume in the shower you now have the(tenuous) excuse, that it’s good for your health! 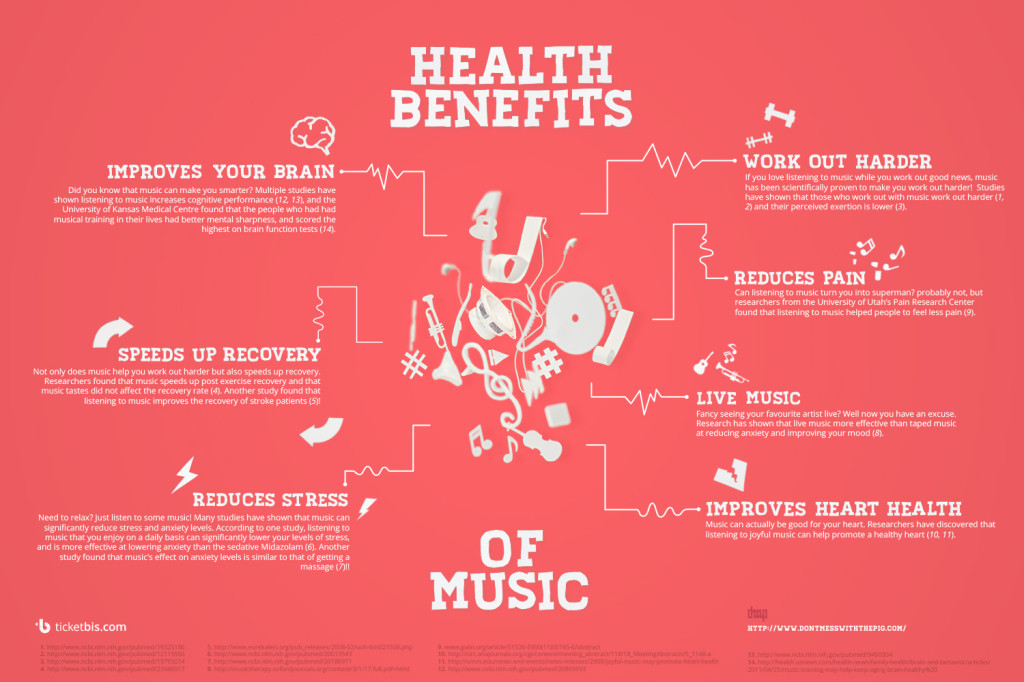 It’s not the first time that music has been cited as being good for your mind, body and soul: a report published in the Science journal last year that connections in nucleus accumbens area of the brain become stronger when a listener not just listens to music, but enjoys what they are listening to. The study took place at the Montreal Neurological Institute at McGill University with scientists playing 19 volunteers 60 pieces of new music. The participants were lying on an MRI machine and had the opportunity to “buy” the songs they liked from a mock-up online music shop, thus mimicking the ITunes shuffle.

Speaking to the BBC’s Science in Action programme, Dr Valorie Salimpoor said: “We know that the nucleus accumbens is involved with reward. But music is abstract: It’s not like you are really hungry and you are about to get a piece of food and you are really excited about it because you are going to eat it – or the same thing applies to sex or money – that’s when you would normally see activity in the nucleus accumbens. But what’s cool is that you’re anticipating and getting excited over something entirely abstract – and that’s the next sound that is coming up.”

But what about listening to music that you dislike? Will the latest Kasabian cause you to erupt into a bout of road rage? Or can your neighbours insesant drum and bass that unrelents until 3am each evening raise your blood pressure to unsafe levels?

Maybe the pounding commercial dance music in your local gym is a bad example but particularly since the advent of the Walkmen in the 1980s and the Ipod in the 2000s, music has been used to aid exercise regimes music with a particularly good electronic beat(How about some Daft Punk?) has been known to aid performance on a treadmill or whilst repetitively jogging. The inforgraphic even claims it makes you work out harder!

Live music particularly it is claimed by the Infographic, can be even more effective for improving mind, body and soul and indeed the rush of a live performance from your favourite artists(Take Pulp’s classic Glatonbury performance for example) seeing the whites of their eyes and experiencing their performance there in that very moment: can heighten the senses, get the heart racing and the mood lifted and invigorate the soul. But dare I say it what about tinnitus? Dare I say it what about tinnitus?! Surely that’s a physical draw back of live music?

Not only is it good for your body, but music can elevate your mood and reduce stress, relaxation tapes often accompany meditation sessions and the use of relaxing and calming music has been shown to help dampen anxiety and negative thinking. The Beatles were known to be great exponents of the art of transcendental meditation and many musicians have trumpeted its benefits when coming up with new sounds or lyrics. Maybe the new Ed Sheeran album will be prescribed in future for insomniacs?  Anyhow I’m off to bed to the soundtrack of Sigur Ros’s ‘Agaetis Byrjun’….

What do you think? Does music have health benefits?!Or is the infographic exaggerating its benefits a bit?