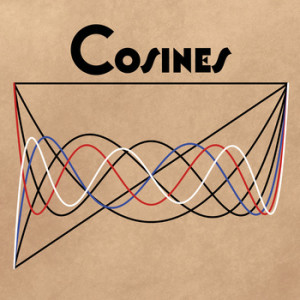 The definition of math-rock (and you may agree or disagree with the Wiki description) is certainly one that brings to mind rather angular sounds. In the case of Cosines, not only do they have a math-rock influence, they also seem genuinely interested in mathematics – along with the likes of Stereolab, krautrock and much of the c81/c86 movements.

Add to that the matter-of-fact Yorkshire stylings of frontwoman Alice Hubley’s lyrics of love, life and relationships, and you’ll find similarities with those other famous folk from the region – notably, David Gedge and Alex Turner – in terms of their outlook and lyrical concerns. Right from the opening track ‘Out of the Fire’ it’s clear this is a very special album.

How the band came together is also worthy of note. Actually, I don’t care if the following is not true, it deserves to be shared with the world because it’s so wonderfully anti-star: “Simon Nelson and Alice Hubley met on the London Underground after a Stereo Totale gig in 2009. Two days later Simon was round Alice’s house unblocking her kitchen drain. Since then Simon has been round and put up two curtain rails, a blind and a shelf.” Well, it beats the usual gubbins of ‘we just make music for ourselves and if anyone else likes it, it’s a bonus.’

The album’s outstanding track is the closer, the torch song ‘Our Ghosts’. I would say it was worth the price of admission alone, were it not for the fact that there’s so many brilliant tracks on the album. It rounds off an album so excellent that I had to play it again from start to finish.

And that genuine interest in mathematics? Well, it’s not only in the band’s name, and the album title, but also the artwork: the Oscillations‘ sleeve features the Legendre Polynomials, a sequence of solutions to an equation created by 17th century French mathematician Adrien-Marie Legendre, who is one of 72 names inscribed on the Eiffel Tower.

Oscillations is out now on Fika Recordings