There is something quintessentially heart-warming about the Indietracks Festival. It is an event that has become well established on the festival circuit, yet has neither pretence nor desire of grandeur. The venue restricts the scale of the event of course, yet the organisers expertly select performers who appropriate the ethos that has developed.   Those performers blend in with Joe & Jenny Public in a communal spiritual gathering that is somewhat unique.   There are four stages for the weekend; the main stage perched on the corner of the lush grassy field; indoors in the old locomotive shed; inside the old pew-seated chapel and then on a steam engine of course, which continues to trek along its familiar route like any ordinary weekend.   Things kick off on an abridged scale on Friday evening with four bands lined up on the main stage. Around a thousand faithful roll in for the early delights, cumulating in a wonderful performance by Allo Darlin’ who pulled on board a few of the following day’s performers. Preceded by The Chills who have been around for over thirty years and dished out a selection of hits to provide a welcoming hug to the ensemble to set things firmly in motion for what is to become a wondrous weekend. 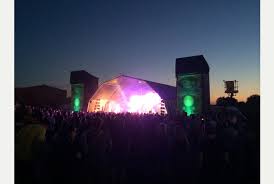 Saturday sees the real kick-off and suffering a ruptured tent pole, this writer must confess to having missed the start of his shift, sorry!   Thankfully I arrived in time to catch the charismatic Mark J Hibbett and his Violators who had assembled quite a gathering.   Playing all his “hits” as he put it and bantering with the crowd like a depoliticised Billy Bragg, a memorable experience for sure. Over on the main stage comes Linda Guilala who are a band that can make a fair old racket for sure. It’s power pop and delivered with both style and energy getting folk up off their arses for a while! Dashing back to the indoor stage for another dose of power pop then with those jumpy jangly Swedes, Dorotea who provide a frenzied attack that sees the assembly gain momentum heading into the evening. Back over on the main stage we have those quirky Scots The Spook School who have the audacity to include a trumpet in their instrumentation, so the “are you ready to rock” greeting might seem misplaced but they do a decent job, even if the chit chat becomes a little addling.

There’s a good deal of anticipation for Joanna Gruesome on the back of an impressive debut album last year. The Welsh nu-gazers certainly put on a show too, with a confident and powerful set that literally lights up the stage. The Popguns need no introduction here; one of the originators of indie pop at the end of the eighties, they have some real greatest hits to dish out and Wendy Morgan dons her finest Laura Ashley to brighten everything up. The arrival of “Landslide” sends everyone over the edge and a significant impact is left. The Proper Ornaments seem a little unbefitting in the chapel, with their high-volume psychedelic shoegazing and the duo almost take the roof off to the obvious delight of the packed congregation. To wrap proceedings up for the day we have Gruff Rhys, no longer accompanied by any super furry animals and today he merely brings along a percussionist, filling the gap with a projector screen. His latest album American Interior has been well received and so today he turns it into a history lecture. The converted are delighted, the unconverted remain so, with an abstract repertoire that works well on the level it is pitched and is a suitable closure to the day. 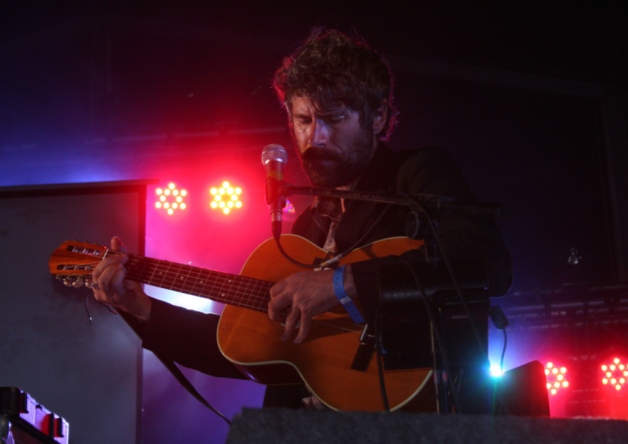 On to Sunday and first up on the Indoor Stage is The Swapsies who do a fine job warming folk up for the day, even if the sun appears a little shy. Excellent banter between the five band members and an upbeat indie pop set that gets the mood well and truly under way. Next up is No Ditching; five little girls with one big noise. They are a tight unit who spit out power pop at its finest, with real drive, determination and a clear delight to be on board. A glance into the church stage finds us experiencing a certain Ellis Jones manifesting himself as Trust Fund. Whilst the performance is a little disjointed, it’s an earnest performance that befits the proximity offered up by the full-house gathering. Back to the loco shed then to catch Bradford’s The Hobbes Fanclub whose upcoming début album is hotly anticipated. They display a certain debt towards The Wedding Present but border on shoegaze a few times, then weld together indie and punk with panache and immediately take proceedings up a few notches. 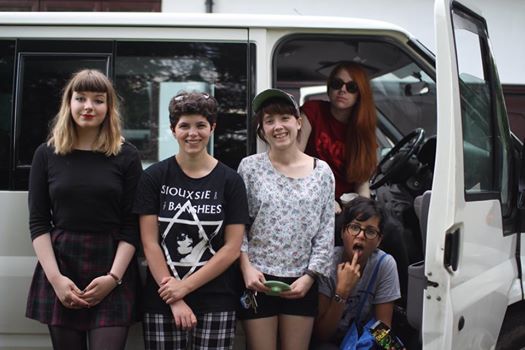 The sunshine starts to show a little more interest now, so time to venture outdoors where we find The Very Most on the main stage, a multi-national sextet who have a penchant for surf rock and dream pop executed with a light-hearted spin and is enough to coax the sun out for real. The Flatmates are another of the indie pop pioneers drafted in for the occasion. Having reformed last year with the voice of Lisa Bouvier added, they have clear rejuvenated enthusiasm that is amply shared by the crowd. A bunch of ageing misfits they may be but the spirit of circa ’78 Blondie is here and the new material blends neatly with the old to delight the crowd, resulting in one of the stand-out performances of the weekend. Stephen Black from rustic Wales prefers to be known as Sweet Baboo and is a perfect fit for Indietracks. His charismatic and humorously narrated performance includes a splattering of old and new material, with “I’m A Dancer” being a highlight.   The audience are captivated by his delivery of simple pop songs and the man shows his abundant proficiency on the guitar too – delightful. Disappointment follows with the news that Let’s Wrestle have gone AWOL with poor old Wesley having called in sick. But there’s enough activity to absorb the opportunity to laze on a Sunday and Mega Emotion take full advantage in the church with a vastly oversubscribed throng.

Headlining the indoor stage are another bunch of Scots, Withered Hand. Essentially the brainchild of Dan Wilson, they rock the house accordingly and provide a fitting conclusion to proceedings in the shed. The Hidden Cameras played Indietracks back in 2011 when they were plagued with technical problems, so today a broken guitar string is light relief. Headlining the main stage on the last day of any festival brings a great deal of expectation and pressure but the organisers and band nail it here without any doubt whatsoever. The band are clearly pleased to be top of the pile and put on a show.   Bare-chested apart from silver sashes and wearing dhotis (skirts to be fair). Gay church folk is the tag they inherited, but there’s little evidence of the second two elements, as they blast out a powerful set of tunes, almost tribal in places, leaving the place astounded with a sophisticated and stunning performance.

So as the night falls and the temperatures drop, weary legs carry the faithful back to their dishevelled tents but with warm hearts, full souls and a true sense of belonging. There’s a genuine family environment created here and most leave in the knowledge there will be valuable reunions in future years, with fans and bands alike. It was the second visit for this ageing misfit and my only regret is the bands I missed but I know many of them, like me, will be back again.