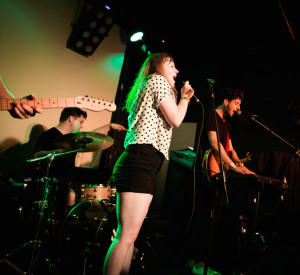 I love it when you have a lightning bolt moment with music. It happened to me last week, at the Globe Theatre in Cardiff. I was there to photograph The Joy Formidable, and was catching up on edits, sitting quietly in the balcony, when the opening act, SUN UP, came on to soundcheck. I was trying to concentrate, but was completely distracted, first by Frøydis’ vocal, then by the summery sugary uplift of the whole band. A couple of hours later, with a crowd in, they were even better.

They are pretty damn new and have precisely one song out there. As luck would have it, they have this week released a charming little video to go with it. They are London based, although as you might have guessed, their vocalist is Norwegian.