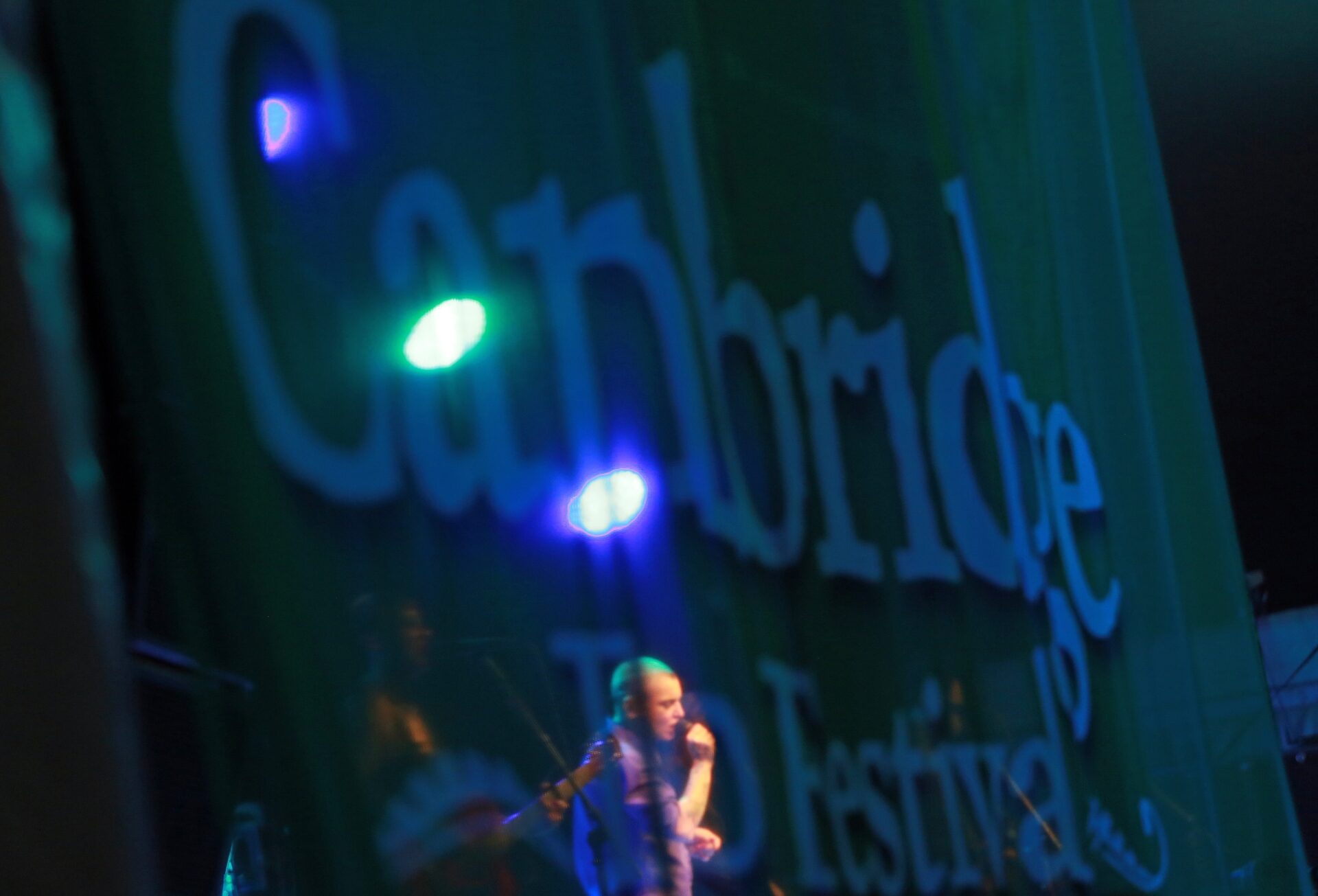 First held in 1965 the Cambridge Folk Festival celebrates its 50th anniversary this year. Inspired by the Newport Jazz and Folk Festival of the very early ‘60s it takes place in the wonderful grounds of Cherry Hinton Hall to the south east of the city centre. Still run by Cambridge City Council, the festival is now established as one of the longest running and leading music events in the world.

In the glorious sunshine of Friday afternoon, the stirring sea shanties and saucy seaside postcard humour of Cornwall’s all male singing group Fishermen’s Friends capture both the celebratory mood and the festival spirit. The more serious musical fayre waits until the evening sun starts to go down before revealing itself. 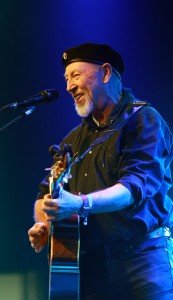 acoustic guitar and a lone voice provided, of course, that you have the songs to match. One of the eminent musicians of the English folk scene, his set spans much of his illustrious career. From 1974 and the second album he recorded with his then wife Linda, I Want To See The Bright Lights Tonight he takes the title track and ‘Down Where The Drunkards Roll’. ‘Saving The Good Stuff For You’ from last year’s Electric – his fourteenth solo album – shows that he has lost none of his unerring ability to still draw from his often mordant inner landscape and stitch those feelings into the fabric of the most beautiful of melodies.

Controversy has stalked much of Sinéad O’Connor’s career. From mental health to Miley Cyrus and from the Pope to Prince her public and personal life has been a continuous switchback ride, one in which every dramatic turn seems hellbent on further distracting from what is her undoubtedly huge talent. Appearing relaxed and happy, this evening she puts everything else to one side. When stripped of all the craziness that appears to often surround her life, her voice shines through. A magnificent, electrifying instrument it swoops and soars, never more so than on ‘Nothing Compares To U’. The song that first brought her into the wider public domain nearly a quarter of a century ago still has the capacity to astonish. 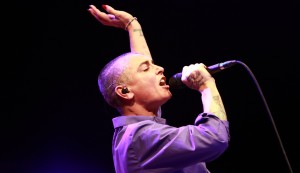 Cambridge Folk Festival has moved with the times, recognizing that to stay within the parameters of traditional folk music alone would have been both restrictive and potentially fatal. To this their core musical genre they have added roots, world, country, mariachi, blues and a far wider and more contemporary interpretation of folk music. Saturday is a perfect illustration of how Cambridge Folk has not only managed to survive in a fluctuating and often uncertain festival market, but positively flourish. 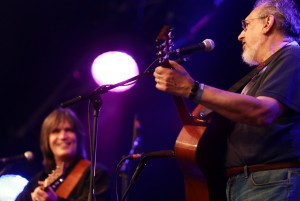 and Eliza Carthy rub shoulders with David Bromberg and Larry Campbell (pictured), the latter exploring the best American traditions of blues and bluegrass on their guitars and mandolin. Martin Carthy also provides a tangible link to the inaugural Cambridge Folk Festival and the appearance at it of one Paul Simon; it was Carthy who taught a young Simon to play the song ‘Scarborough Fair’.

Later it is the turn on the main stage of the southern blues and rock of North Mississippi Allstars who precede The Full English, a collective of musicians drawn from the English Folk Dance and Song Society amongst whose number here this evening they can count Faye Hield, Seth Lakeman and Martin Simpson.

Loudon Wainwright III advises us that we are going to get two, possibly three Loudons 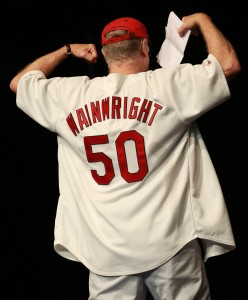 tonight. At least one of them is not that easy to like. Not one, but two misplaced shouts from a drunk in the crowd spooks him and you see a rather telling flash of unpleasantness cross Wainwright’s face. Later he completely misjudges irony and humour on a recently written song when lyrically contrasting everyday problems against those experienced in Gaza. Yet set against this, his soliloquy from his father’s writing about the death of a family dog is deeply moving and when he rises above pastiche – as he does on ‘Happy Anniversary’ and his superb cover of Michael Merra’s ‘Hermless’ – he shows himself still able to accurately convey the complex emotions of human relationships in song.

In terms of forging your own musical identity you suspect that being the daughter of Johnny Cash it cannot be easy. As she switches effortlessly from country to blues to folk her father’s legacy may never be that far away – ‘Money Road’, complete with a scintillating burst of guitar from her husband John Leventhal, and her mournful interpretation of Lefty Frizzell’s ‘Long Black Veil’ are but two highlights – but it is a great tribute to Roseanne Cash that for the entire duration of her captivating performance you almost completely forget this fundamental fact. 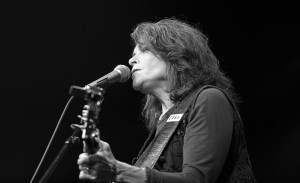 Back for their fifth festival appearance Oysterband need no introduction to what Cambridge is all about, its traditions and its place in the folk firmament. Their rousing set demands an encore and they duly oblige with a thrilling ‘Granite Years’. As with Martin Carthy before them, Ladysmith Black Mambazo connect with Paul Simon and it is their work on his album Graceland that first brought them recognition outside of their South African homeland. Their extraordinary a cappella voices carry a message of suffering, dignity and hope. And Torontonian Lindi Ortega’s refreshingly honest take on country and rockabilly is yet further evidence of the broader musical spectrum that the festival now enjoys. 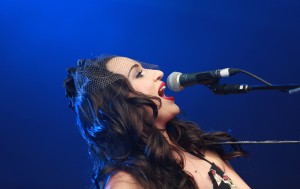 “This is a folk festival, right”. It is not clear from these words – practically the only ones that he utters all night – whether or not Van Morrison is asking a question or merely reaffirming a truth. Either way he follows them up by playing what he describes as a folk song. Whether or not ‘Rough God Goes Riding’ fits that particular description may be a moot point. What is not is 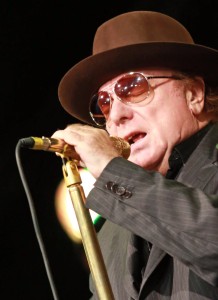 that for the vast majority of his sixty minute Sunday headlining set – he exits the stage half way through the concluding ‘Gloria’ leaving his band to play on without him in what becomes an overblown extended jam – he is content to pootle along in second gear.

Now in his seventieth year, the Cyprus Avenue crosspatch has nothing left to prove. Astral Weeks alone will guarantee him a place in heaven. His voice remains remarkably strong – during ‘Days Like This’ and Sonny Boy Williamson’s ‘Help Me’ you can still hear its impressive transcendental bluesy qualities – but for the most part Morrison seems quite happy to point his band and his music in the general direction of the nearest late night supper club.

By way of contrast and in what is the undoubted performance of not only the day, but the entire festival weekend, Jason Isbell shows that his music does matter. The erstwhile Drive-By Trucker armed with only an acoustic guitar and accompanied by his wife Amanda Shires on fiddle packs his set with power, passion and propriety. Having come through the other side of what has been a mostly self-inflicted darkness, his songs are as one cathartic, grievous and truly inspirational. ‘Alabama Pines’ is yearning; ‘Elephant’ heartbreaking; and on ‘Relatively Easy’ his and Shires’ voice merge as 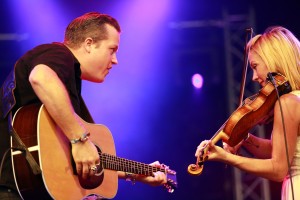 her fiddle weaves in and out of the song’s gorgeous melody.

Jason Isbell and Amanda Shires conclude with a glorious reading of Warren Zevon’s ‘Mutineer’. “Some May Sink, We Will Float” they sing, sentiments that can just as equally be attributed to Cambridge Folk Festival’s continuing longevity. Here’s to the next 50 years.

More photos from the festival are HERE