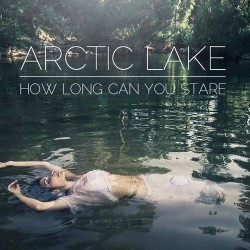 Very little is known about London-based three-piece Arctic Lake, though it’s doubtful it will stay that way for long. Forming after meeting at university, their sound is best described as a merging of influence. From London Grammar-esque ambient instrumentation to Bat for Lashes‘ penchant for baroque-pop theatrics, it’s an amalgamation which has already earned them favour with the likes of BBC Introducing and Amazing Radio, and, given the success of the aforementioned London Grammar in 2013, as well as Liverpool’s BIRD earlier this year, it’s a sound that’s sure to see them go places.

Though it’s just a debut single, ‘How Long Can You Stare’ is a track that rises and falls in swathes of delicate guitar and impactive percussion that would lead one to believe this is anything but a debut. Built around a balance of shifting dynamics, the track mounts as it progresses; the drums becoming faster, the guitars heavier, culminating in a fraught and emotive final third. It’s singer Emma Foster that really makes this track special, however, like the track itself her vocal rises and falls. From impassioned howls to glassy whispers, it’s captivating stuff.

Whilst this might only be a debut, the sheer emotion and passion it exudes gives the impression that this is a band with a whole lot more to offer, that this is only the tip of an ambient iceberg. Having already earned the praise of radio press nationwide, it’s only a matter of time before the ball really starts rolling for Arctic Lake. Their formula might seem a little familiar, but it’s a proven one, and when the emotion behind the music is as tangible as this, it really doesn’t matter if it’s been tried and tested before.