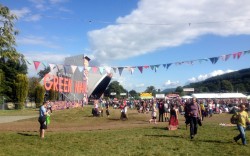 Arriving in Glanusk Park I was feeling pretty pleased with myself. A couple of months earlier I decided against going to the ill-fated Jabberwocky festival in London, opting instead for the wilderness of Green Man. Now, witnessing Jabberwocky’s social media massacre following their disastrous last minute cancellation, my vote for Green Man felt like one of the luckiest moves I’ve ever made.

Like many of the best festivals, Green Man started life as a large communal party and has developed organically, finding a way of preserving its identity and its artistic credentials. In many ways, it is an example of how a festival can expand and go from DIY to a more professional set up without turning crap.

Green Man’s folkier roots are still evident in some of the music programming but it has clearly moved on, attracting not just bigger acts but also a more diverse range of musical genres.

Thursday night felt like a warm up, with many people arriving late into the night or the following morning. Friday was a full-on start filled with tempting offerings. John MOuse‘ charisma and confidence won me over almost instantly. There was plenty of hopping about and audience interaction in-between songs about ‘carpet burns that last for weeks’, Welsh (definitely NOT English!) fairgrounds and a hamster called Baldrick.

Liverpool’s All We Are offered an exotic sonic cocktail of R’n’B, psych and indie. It was fresh and unique. The band genuinely looked like they were enjoying the festival vibe, and their feelings were clearly reciprocated by their audience.

Sun Kil Moon attracted a sizeable crowd but failed convert me. Same goes for Polica, whose polished pop felt too laboured and lacking in emotional depth. Adult Jazz, on the other hand, was a revelation. Their jazzy dreamy floating sound, incredible elastic vocals and pulsating afrobeat grabbed everyone’s attention for the entire set. Definitely a band deserving much more attention!

Later on, Daughter‘s intimate indie folk seemed perfectly suited to the Green Man aesthetic and Beirut inevitably attracted a huge crowd over at the Mountain (main) stage. However, my Friday highlight was Francois and the Atlas Mountains, an exceptional live band, whose elegant, unostentatious melodies were supported by flirtatious stage theatrics and natural charm.

The night closed with a triumphant performance from The 2 bears, who entertained the late ravers under a giant circus tent dome of the Far Out stage.

Saturday brought a new wave of sounds, starting with transcendent melodies of the Welsh Music Prize winner Georgia Ruth. Her warm manner and gentle lilt were as bewitching as her delicate songs.

Woman’s Hour gave a passionate intense performance that once again confirmed their reputation as a new band to watch. The fragile female intensity of their version of ‘Dancing in the Dark’ brought me close to tears.

Given the amount of media coverage they’ve had in the last 12 months, Fat White Family predictably drew a big crowd. Having only seen them in dingy dark foul-smelling little London dives last year, it was both a shock and a relief to see how confident they appeared on a big stage, losing none of the menace and messy urgency that made their live sets so unique.

In many respects the same could be said for East India Youth, whom I remember playing tiny 100-capacity venues less than 18 months ago. He seemed not just intensely confident but almost flamboyant in his delivery. Seeing him perform at a festival in front of a big crowd singing along to ‘Heaven, how long’ was a very special experience.

But it was Cardiff’s, curiously named Them Squirrels that truly captured my eyes and ears. Erratic yet elegant, they presented a theatrical performance fuelled by asymmetric rhythms and a frightened urgent violin. Definitely a much more interesting proposition than some of the better known names on the festival line up.

To my disappointment Bill Callahan attracted fewer people than you might imagine given his creative potency and cult status. As the night unfolded, highly anticipated headliners Neutral Milk Hotel appeared on stage. The announcement before their performance stated there would be no filming, asking the audience to refrain from taking any pictures either. Thousands of people gathered around but as the giant screens near the main stage went dead, seeing any stage action was near impossible.

Instead, I made a B-line for the Far Out tent to see Kurt Vile and the Violators, whose bold charisma and psychedelic shoegazey rock provided an awesome ending to a very special weekend.

So what is the secret of this increasingly popular festival? Although it attracts a diverse 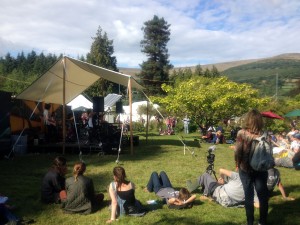 audience, at Green Man you’re not likely to encounter teenagers trying to set fire to everything in sight or too many hipster types. There’s plenty to do for kids, without it turning into a family camping weekend. You can spot older punters on mobility scooters and parties of 30-something London professionals.

Links to the local community and support of Welsh acts are definitely elements of the festival’s success and longevity. The site is undoubtedly one of the most spectacular festival setting in the UK and it is also small enough, making it possible to move from one stage to another without missing half a set.

Most festival organisers appreciate that music is only part of the success equation and festival goers expect far more than just bands. The range of non-music activities at Green Man is almost incomprehensibly vast, ranging from the massive comedy and spoken word bill to presentations from top universities, alternative therapy tents, even a butterfly house and performances from the National Theatre Wales. You can get your glitter tattoos, pedal power your phone, learn about the similarities between surgery and puppetry, or get lost in the solar system chill out zone.

Seemingly endless variety also applies to the food and drink options, not forgetting that Green 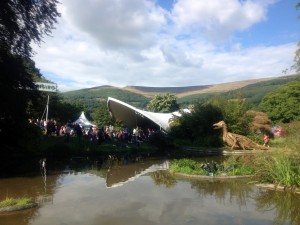 Man is the only UK festival holding a 24 hour license. The fact that Green Man organisers understand festivals are now all about delivering a complete experience rather than just a musical line up is confirmed by their offer of Settler’s Pass that allows people to camp for several days before the festival, enjoying the beauty of Brecons in the run up to the festival. It is a holiday experience and not just a music event.

So, as you might expect from the above description, it is also a very white middle class shindig but its size, relatively remote location and sophisticated programming make it a more elegant and intimate affair than any large festival like Latitude can offer.

I watched the giant pagan Green Man effigy perish in the flames at the end of the night. I walked across to site to the Walled Garden, where London’s Feeling Gloomy indie disco was gathering pace. Somehow their name seemed to perfectly reflect my feelings about the inevitability of Monday morning’s departure and the fact that it was all over for another year. 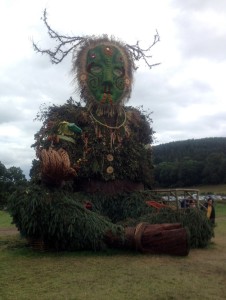