It was a curious mixture of caution and temptation that brought me to Supernormal. ‘The alternative’s alternative’, a festival that seeks to break the boundaries between artists and audiences…it all sounded like it had a hideous potential to be an unbearably pretentious art school happening. Yet, its menacing line up and its sheer longevity hinted at a more cruel and unusual, truly creative cult content and environment.

As weeks went by and more acts were added to the already odd cornucopia of talent, I knew I made the right decision. I’m not going to join the young hipster crowd at Beacons or the moneyed middle class corps at Wilderness, I’m heading down to the green pastures of Braziers park to experience the alternative festival reality.

After a long and unforgiving motorway journey I arrived to my destination welcomed by a rain of biblical proportions. Soaked to the bone but unperturbed I rushed off to see Gnod, who were unleashing their ferocious aural assault on a small but defiantly waterproofed crowd. Immediately I was relieved to see a few bearers of Butthole Surfers t-shirts. Not just because I rate their batshit madness but because it was a sign of a festival for music fans rather than just people wishing to have a boozy camping weekend in the country.

On stage Gnod were totally locked into each other: ominous chanting and improvised dancing with malicious intent. I could feel my brain resonating in my head… I drifted towards the bar and realised it was no ordinary bar but another performance space. Driven by curiosity and excitement I soon headed down to the Barn, which was surrounded by other smaller quaint wooden buildings and felt a bit like a film set. I entered the Barn to find myself in an overwhelmingly large and atmospheric space. Sarah Angliss was on stage, weaving a very odd tapestry of sounds and bizarre visuals: thinking bells, dolls, theremin and loop pedals. Supernormal world was proving to be a very odd reality indeed.

The medieval surrounds of the Barn also felt like the most appropriate setting for the free jazz experimentation of Death Shanties. Infused by Lucy Stein’s stained glass live art projections, their avant-grade psychedelia of drums and untamed sax acquired a new heathen qualify of feral sound and vision.

The next morning I found myself walking around a peculiar and deeply moving open air art installation. Words of passion and conviction. Art attack. A statement of an imminent political outburst. 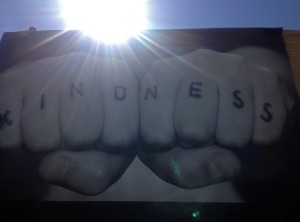 If you can imagine a cult band supergroup, Luminous Bodies – featuring members of Part Chimp, Gum Takes Tooth and Terminal Cheesecake – would be a good contender. One of the drummers was wearing blond wig and shades, the band looked like they were out to cause some damage. ‘We’ll start with a nice slow number’, they declared cranking the noise up to 11. Soon enough we were introduced to a pair of giant lobsters, who proceeded to perform a violent mating ritual culminating in ejaculating into the crowd. Parents may have had some explaining to do but a massively entertaining gig for the rest of us.

Over at the main stage the demented siren call of a new noise unit, Sex Swing, was bringing round scores of supernormals, drawing them deeper into the dark vortex of its deadly howl. Suffocating screams of saxophone crashing against relentless wall of repetitive sound. It sure didn’t mean to please or appease. It wasn’t pretty but it was pretty fucking awesome. I turned around and saw someone wearing a crown made out of knitting needles decorated with marshmallows. As you do.

I rested my ears in the safety of the mysterious gothic Braziers House, home to the longest running artist community in the UK. Resisting the comforts of this eerily enchanting place, I headed back to the main stage to check out Flamingods, who’d been causing all manner of press buzz commotion with their addictive brand of MENA dance rhythms and electronic beats. It was a colourful set, both in terms of its visual presentation and its exotic sounds that quickly got the crowd dancing.

The rest of the afternoon was spent in the company of Horse Loom, who entertained us with songs about intensive care and dead children. His virtuoso guitar playing was followed by dark soaring melodies from Breathless and Mob Rules‘ skull-spiriting madness that brought us to the edge of the abyss. Not something you’d forget in a hurry, or get a chance to see at another festival.

Whether you want to call it darkwave or the plain old-fashioned goth, Esben and The Witch were an intense and captivating horror show that worked particularly well in the context of other Saturday main stage acts.

Whilst watching the curious crowd gather around Sly and the Family Drone DIY set in the middle of the field, I was offered some watermelon by a gent wearing an 18th century wig with a tree stand display of rubber gloves attached to it. Perfect Supernormal attire. Sly and the Family Drone delivered a suitably messy and intoxicating free style experience before Teeth of the Sea trumpeted the descent into a psychedelic dystopia forged in the fires of prog-ish krautrock disco inferno. Not for the uninitiated but a towering, terrifyingly awesome fucked up fun noneless.

Later on the bar/DJ tent submitted to the sounds of disco and funk delivered by the expert hand of The Quietus chief John Doran. The stage was flooded with artists and punters. We danced to the bitter end…

Sunday morning was a sombre soggy affair. But by eleven I could see the first casualties creeping out of their tents. Thought Forms hypnotic dark oceans of noise seemed a bit heavy for Sunday lunchtime but nobody appeared to disagree with them when they declared, ‘This is the best festival. Ever.’

Down in the Barn Sunday afternoon unfolded an array of folk sounds, from the fragile magic of Lutine to Kemper Norton‘s slurtronic oddities. Surrounding activity tents hosted everything from films to live drawing and Casualty Songwriting Workshop. Even a nearby greenhouse with gigantic tomato plants was turned into a makeshift cinema stage. On the way back I had a go at smashing patriarchy with Rachael House, before returning to the main stage to witness Taman Shud causing seriously loud carnage. Periodic blasts of torrential rain meant that the bar/DJ tent was full for the Dark Northumbrian orchestra, whose renditions of traditional folk from the North East and the border country paved the way for an altogether different folk experience offered by Frank Fairfield, whose stories of Texan cowboys and truly jaw-dangling bluegrass Americana seemed slightly at odds with the rest of the main stage line up, which mainly consisted of psychedelic, noise and drone rock acts.

Sunday night main stage may have belonged to the ‘post-Grease’ (their words, not mine!) voyagers The Cosmic Dead but I walked across the supermoon-lit field to experience a trip to the moon on a cosmic freight train operated by the Spaceheads and Rucksack Cinema collective. Barn roof turned into a starry universe, with little green laser lights speeding along and bursting into little explosions. Psychedelic colours juxtaposed with vintage film footage, space klaxons mixed with trippy beats. A mind blowing end to a super-normal weekend!

So was it a SUPER-normal experience? Although it maybe somewhat biased in its over-reliance on certain musical sub genres and influences (noise rock, psychedelia, doom, folk) Supernormal remains a unique event in its genuine commitment to creating a communal celebration, its uncompromising rejection of any profit driven trapping of successful festivals, its respect for both artists and audiences and its active embrace of green policies. Those who disagree are welcome to find another festival where you can buy a pint of excellent local ale for £3.60 or a meal for less than £4, where artists are given adequate soundcheck times and there are no separate VIP areas, where the organisers not just encouraged but actively facilitate car sharing, and where – most importantly – you can catch a very different line up, get fully immersed in creative activities and discover something genuinely new. It is a true DIY event that shows how much can be achieved on a sparse budget and how less can often mean more. Here’s to hoping for its safe return in 2015!