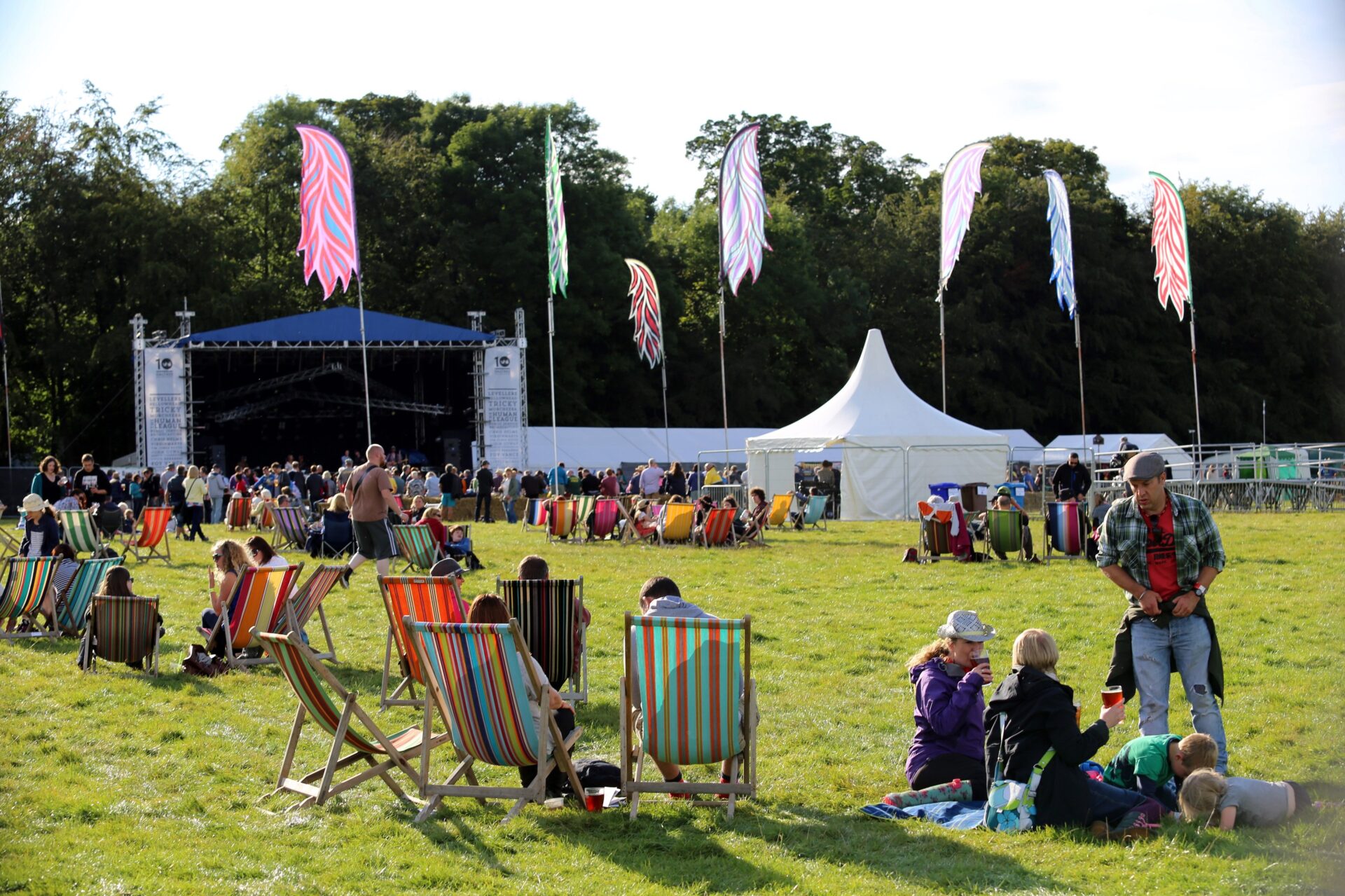 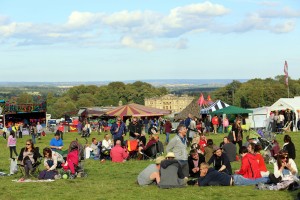 “We’ll always be together, Together in electric dreams”. As The Human League bring down the curtain on this year’s Galtres Parklands festival, Phil Oakey’s words resonate around the Duncombe Park estate. Celebrating its 10th anniversary – the second on the current site – you start to sense that Galtres has now finally come of age.

Whilst maintaining its very strong community spirit, solid core values and excellent participatory ethos, Galtres has this year made significant positive changes to its site layout which results in a far more integrative and intimate setting. The festival continues with its great commitment to promoting local talent, but as it grows it also attracts bigger and arguably better names to its musical line-up. 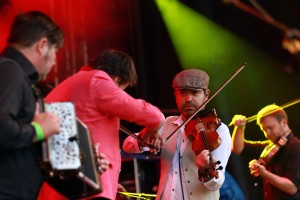 on the main stage. Bellowhead’s big folk band breathe new life into traditional tunes, songs and sea shanties – their rousing interpretation of ‘Scarborough Fair’ is infused with a new, rockier energy – whilst the Levellers’ cement their place in counter-cultural folklore with a vibrant, anarchic, yet thoroughly good-natured set which bristles with punk spirit and chimes with a forgotten era of free festivals.

Gilmore & Roberts continue with Friday’s fervent folk flavour on the Oxman Stage – Katriona Gilmore’s fiddle positively sizzles on their penultimate song ‘Scarecrow’ – but it is local legends …And The Hangnails who really kick-start the birthday celebrations. Martyn Fillingham and Steven Reid’s T-shirts – The Replacements and DZ Deathrays respectively – probably tell you just about all you need to know about the York duo’s musical reference points as they bludgeon their guitar and drums into submission under the canvas of the Black Howl stage.

Saturday sees the welcome return of the Hull invasion to the Oxman stage, showcasing as it does some of the best young musical talent emerging from the East Riding of Yorkshire. Night Flowers, Tom Skelly and the Salty Beards and the Humberside garage punks Mother build a mightily impressive bridge from late afternoon into early evening. Later, Leeds based 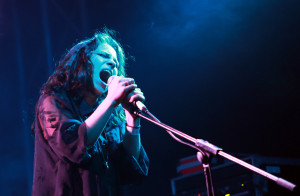 duo Paris XY – whose only connection to the east of the White Rose County appears to be the M62 motorway – are a dark, brooding presence. Alice Smith’s (pictured) powerful, doomed-soul voice and James Orvis’s liquid guitar and exquisite electronic treatments form a perfect union of imperious noir. Together they provide an ominous soundtrack that creeps behind the faded curtain of some disused European arthouse cinema.

Tricky (pictured) places an altogether different interpretation upon the word menace. Whether it is the consequence of paranoia or pain but up until a quite bizarre denouement to his set when he invites members of the audience to join him on stage, he performs in almost complete darkness. This merely adds to the alienation of his deeply disturbing, subterranean sound.

For all of its oblique hostility, ‘Black Steel’ – taken from his intense, majestic 1995 album, 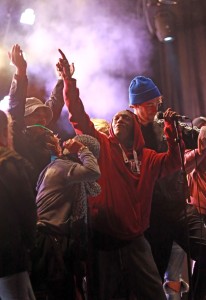 Maxinquaye – is reassuringly familiar. And the intuitive coalescence of his almost indecipherable murmured rap and Francesca Belmonte’s quietly assured vocal delivery on ‘Nothing Matters’ is sublime. Yet for all of the music’s capacity to unsettle – prior to the mass crowd invasion at the end, the stifling ‘Vent’ had been uncomfortably claustrophobic – Tricky’s most welcome appearance at the festival emphasises the great strides that festival is now taking in terms of the quality and diversity of acts that it is able to attract onto its bill.

That this is The Jim Jones Revue’s final tour adds an even greater sadness to what is always a blistering rock n roll show. Jim Jones delivers on his promise to take us onto the dark side of our Yorkshire minds with a performance that oozes sexual abandon and psychosis in equal measure.

Another anniversary being commemorated this year – the 50th in this particular case – is that of the release of The Beatles film A Hard Day’s Night. On the Black Howl stage on Saturday afternoon each artist includes in their set a cover of a Fab Four song. Holly Taymar – the York singer and guitarist back at Galtres for an incredible ninth appearance – chooses ‘She Loves You’. Accompanied by Chris Bilton on guitar they slow The Beatles’ best-selling single down into a rather beautiful ballad.

The words and music of Blue Rose Code tell the hard road that Ross Wilson has travelled, the difficulties in life he has faced and ultimately overcome reflected in the dignified redemption of his songs. But the performance of the day and quite possible the entire weekend belongs to 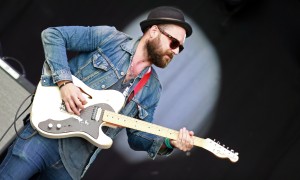 Crybabycry. The Wakefield trio of Jonny Firth (pictured), Rosie Doonan and Nici Todd deal in the hard currencies of the blues and rock n roll. Having already performed at Leeds festival earlier on in the day they sound as if they would still have enough gas left in their tank to drive all the way down to Memphis via Detroit.

Metal, mayhem and the Marshall stack provide the staple diet of the Oxman stage on Sunday. The marriage of twin-lead guitars, mountains of long hair and more than a passing resemblance to Iron Maiden propels York’s Pantheon along the heavy metal highway. Out of the same city comes the five-headed metalcore behemoth that is RSJ. They eschew finesse in favour of nihilism, noise and singer Dan Cook’s fearless adventures atop of the stage rigging.

Cook is back shortly afterwards, making a cameo appearance during A Joker’s Rage hugely enjoyable show that marries the visual display of The Dark Knight with the fist-pumping rock of Kiss. Previous support slots to Slash and Queens Of The Stone Age point towards Macclesfield’s 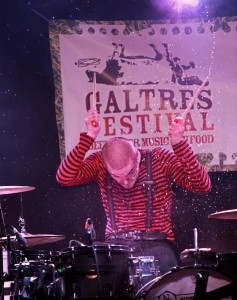 The Virginmarys’ proven rock credentials. They aren’t in the mood to hang around and driven along by Danny Dolan’s (pictured) relentless drumming they give an ideal exhibition of no-frills rock music.

Beth McCarthy provides the light to all of that shade. Accompanied by Bradley Blackwell on double bass, the young singer-songwriter from York overcomes her throat problems and beguiles what surely is the biggest crowd of the weekend at the Black Howl stage with an enchanting blend of quirky, endearing charm and no little ability.

Outdoors with plenty of light still left in the sky is probably not the best time and place in which to experience Public Service Broadcasting as they splice their post-modern fusion of elektronische music with a series of projected archive movie footage and vintage newsreels. As darkness falls, though, Messrs Willgoose and Wrigglesworth’s stirring accompaniment to a clip from the 1936 documentary film about a mail train from London to Scotland is genuinely inspired. 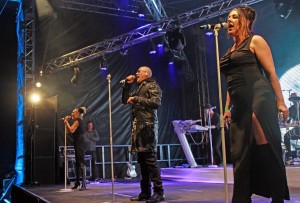 the dreaded descriptor ‘heritage act’ looming large in their rear view mirror every time they look back on a career that dates from 1977. And it is true that the quickly dispensable ‘Night People’ and ‘All I Ever Wanted’ aside, their entire set is drawn from songs that were originally recorded in the last century. But it is easy to forget just how strong that back catalogue really is. Opener ‘Mirror Man’ is a resounding rejection of popular music’s unforgiving ageing process. Phil Oakey stalks the stage like some caged animal, circumnavigating Susan Sully and Joanne Catherall, the two women he found dancing round their handbags in a Sheffield nightclub and the story of which forms the basis of the band’s biggest hit ‘Don’t You Want Me’.

‘Seconds’ – an open letter to Lee Harvey Oswald about the assassination of JFK and which along with five other songs this evening is taken from their 1981 breakthrough album Dare –sounds just as sinister as when first heard all of those years ago. And ‘Being Boiled’, their début single and first encore this evening, is still as refreshingly infectious.

But there is much more to Galtres Parklands festival than music. It did, after all, start life as a beer and cider festival and with more than 100 different varieties to choose from this year drink remains an enduring legacy of the event. There is also an extensive supporting programme dedicated to arts, crafts, cabaret, comedy and theatre, plus a whole raft of activities for children of all ages. But if music alone is to be the barometer by which we have to measure Galtres’ success, then this year’s festival has to go down as an unqualified success.

Photos from Friday can be found HERE

Photos from Saturday can be found HERE

Photos from Sunday can be found HERE