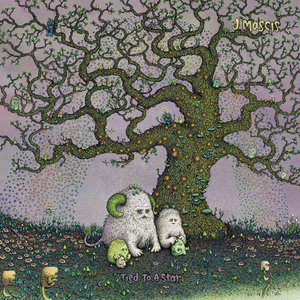 Is it time for J to declare Dinosaur Jr. extinct? Or can the delicate evolutions of J’s sound live in harmony with the more threatening beasts of his past? As a mainly acoustic affair, with little in the way of blistering guitar solos, Tied to a Star demands to be treated as an individual body of work from the very first finger-picked notes of ‘Me Again’. Throughout it feels like a small but significant step away in texture and tone from that which has come before it, unlike J’s last solo outing, Several Shades of Why, which acted as a precursor in some ways for the following Dinosaur Jr. album I Bet on Sky.

For a man who, for 30 years, has been inextricably linked to Grunge, Hardcore, and the heavier end of Alt. Rock to be making acoustic albums as audaciously serene as this one is not as surprising as it may seem. After all, many an artist has branched out, or mellowed, as they’ve aged. What must be made abundantly clear, however, is that the extravagant language of evolution and extinction is not mere hyperbole; this is an album that should see J gaining as much acclaim as for any project he has worked on thus far.

J’s vocal style has always been one of slurs, mutters, and groans – slacker personified. So to be met from the get go with sugary sweet vocals, stripped of the groan yet not of their weariness, is a startling curveball right up front. The best showing of this new approach comes late on during ‘Come Down’; a wonderful display of Shoegaze subtlety complete with Folky guitar licks that elsewhere would keep the focus off those great vocals.

That said, there’s a good chance the reason you’d be interested in a J Mascis album is because of his renowned skills with a guitar. That this is an acoustic album should not for a second make you think that this isn’t one of the finest examples of guitar playing likely to be heard this year. It is, in fact, a master class, with a range of instruments and tones from big bodied Dreadnaughts, through Resonators, to the signature Jazzmaster electric appearing throughout.

Album highlight, ‘Wide Awake’ showcases this magnificently with arpeggiated finger-picking that can rival any epic guitar solo for sheer skill in craftsmanship. That the song comes complete with the most subtle of backing vocals by Chan Marshall of Cat Power to ramp up the beauty proves conclusively that this is an album about more than J, his past as a Rock guitar legend, and traditional notions of side projects. Instead, this is an album that showcases songwriting, production, musicianship, and a sense of composition beyond anything that could have been expected. While some Alt. rockers like Mark Lanegan have succeeded in reaching a broader audience as they age and their style progresses, J might not achieve that cult crossover appeal. That’d be a shame, because this is certainly not a laid back album for Rock fans looking for some time to chill. Instead, this is a wonderful acoustic album that knocks the socks off most anything else in its field. It’s a captivating listen, and one that may be a great evolutionary leap. J is certainly no dinosaur on this showing.