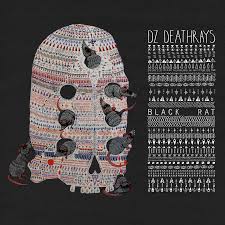 Welcome DZ Deathrays, two guys who began playing house parties and now support the likes of Band of Skulls; two young metalists having fun with the hope that one day they will be  partying with Andrew WK.

One evening at a Band of Skulls gig, these two young dudes walked on stage and proceeded to explode their music throughout the Heaven club in Charing Cross. Catching them once more at the Old Blue Last in Shoreditch made me purchase their EP ‘DZ Deathrays Ruined My Life’

Their second album‘Black Rat’  has the guitar hooks, screaming vocals, attitude, aggression and the start that makes it an infectious party album. A party record that if it were captured on film would look like Slipknots’ music video for ‘Duality’.

More polished than their début album ‘Bloodstreams’ it is aggressive with a maturity that has developed. The title track which opens the album is a subtle introduction reminiscent of the Beastie Boys on III Communication.

‘Reflective Soul’ is a tune of relative calmness compared to their all conquering drum-splitting sounds and inventions on guitar and is more indicative of Jane’s Addiction. The same can be said about ‘Keep Myself On Edge’ which is a throwback to the ’90s and the ‘grunge’ era or rock music as it should be called.

Entering a new sound with ‘Fixations’, an electro pop intro, that may get the dance floor bopping to this pop metal beat. It isn’t as abrasive or attitude-fuelled as other tracks but bears witness to Shane Parsons and Simon Ridley not going stagnant. It shows that they are willing to undertake a change in their process of starting the world’s biggest house party.

“It’s hard to be alone” screamed continuously by Shane Parsons is a record highlight. ‘Oceans Exploder’ and explode they do. DZ fans will be appeased to know they still have their early raw edge, which is definitely not going to leave them.

Signed to the I OH YOU label these two musicians have music in their soul, which bleeds a wide variety of emotions from aggression, lust, tiredness and depression. A story to share, a curse to lift by playing their mellow and occasionally brutal conception of two guys who are enjoying themselves and showing the world their ability.

Be first in line to enter the worlds largest house party sponsored by DZ Deathrays.