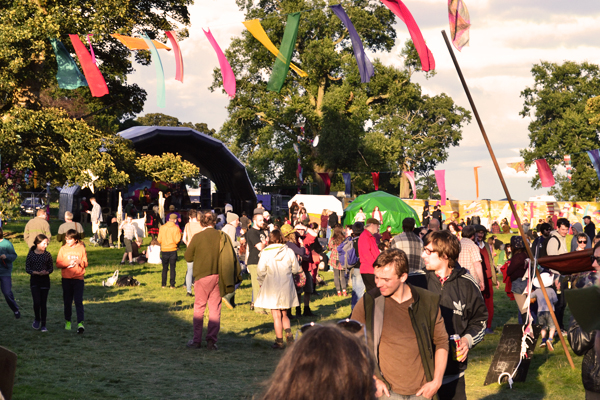 Friday’s afternoon showers and wellies gave way to a weekend of glorious sunshine and many a barefooted wanderer in Cardross Estate. Nestled between the hills of surrounding Stirlingshire, near The Port of Menteith, this truly intimate, family friendly and completely non-profit festival mixed up last years site layout slightly, creating a busier feeling arena whilst keeping the ridiculously friendly community spirit of previous years. And as with previous years, the programming of arts and music ensured there were plenty of new additions on my list of highlights.

Making the short jaunt (literally a couple of hundred yards) from the campsite through the oak and beech tree lined estate to the arena I could hear Laura J Martin had already started her set on the tiny Fruit Stand Stage. Accompanied only by a bass player and her own live loops and triggered backing, the Scouse multi-instrumentalist flitted from one instrument to another making it all look easy. Incredible stuff. Around the corner slightly in the big blue Baino Tent was an entirely different flavour; festival favourites The Cosmic Dead were also playing. Heavy droning bass locking into a groove and keeping it going, whilst synths and guitars flooded around was a ludicrously loud experience. Through walls of feedback guitarist James drew the set to a close by hanging his guitar from the tent decor and giving a rallying indy-referendum plea of “regardless how you vote, just make sure you fucking vote” before being wrestled to the ground by another band member. Jeffrey Lewis brought his straight talking spoken word and songs to the main stage with current tour band The Jrams. Getting sidetracked with a number of other festival factors as well as delays in the band starting meant I completely missed Acid Mothers Temple. Closing the main stage for the Friday was Peatbog Faeries. I’ll put my hands up at this point and say that I went down expecting to be turned off pretty quickly, but the vibe these guys create is incredible and I instead found myself joining the masses at the front hurling each other around in a jig while the guys blasted out the beats and bagpipes.

Saturday started with a workshop from Jeffrey Lewis. A decent crowd had gathered for this despite the morning start. Most were seated on the grass inside The Baino Tent as Lewis talked the audience through some of his sketchbooks, artwork and passions with the help of a laptop and projector as well as answering some audience fielded questions.

No More Tiger provided a nice start to the days music for me. A jaunty, varied set with shared male/female vocal duties provided toe-tapping fun despite a short rain shower. With some sha-la-la style backing vocals there was plenty of opportunity to sing along too. Walking into The Baino Tent afterwards, I was surprised to see a drummer and two guitarists facing the stage. On the stage, the same set-up was facing back out at them. Masses of feedback and effects at ear splitting volume followed. I’m not sure if the Billy Ray Osiris set was entirely improvised or not, at times it was incredible to watch the six of them battle it out and remain tight despite the volume. Equally at times it lost it’s momentum and seemed like two bands playing over one another.

The enormous Glad Community Choir more than filled the Fruit Stand Stage and gave renditions of some favourites such as ‘What the World Needs Now is Love’ as well as more surprising Moondog selections. Whilst stopping to pick up a drink at the bar, my ears were caught by some fairly odd electronic sounds from the Bar Stage. Closer inspection found it to be a one-man band of sorts and in fact a workshop by Paddy Steer. A series of cobbled together electronic instruments and drums all played by the man himself made for excellent entertainment, interspersed with some chat about his instruments and some genuinely hilarious interaction with the crowd.

Flamingods, originally the bedroom project of Kamal Rasool and now a full five-piece, brought their bizarre blend of rhythm and percussion to The Main Stage and had adults and kids alike bouncing about and getting caught up in freeform dances whilst lapping up the sunshine. There was even a member of the crowd being carted around like an aeroplane on the raised arms of several others. Molly Wagger played the fruit stand, reminiscent of The Shins and perhaps Conan Mockasin with their live vocal effects. A nice laid back set suited the surroundings and their dreamy pop went down well. Over in The Baino Tent Geordie Richard Dawson played an accoustic guitar in a way only he can. Jagged picking and just enough distortion to crackle whilst almost hopping from foot to foot – a truly individual style and a joy to witness. We headed back to catch Paddy Steers scheduled slot and found the minute bar stage rammed to the point of overflow and opted to take a spot outside.

PAWS hammered through a set of tracks from their two albums on The Baino Stage with the drummer apparently having just as much fun as some of the crowd. A joke argument kicked off with singer Phillip Taylor screaming “NO” over his repeated requests for more monitor. The Main Stage played host to the dark instrumental rock of hooded Secret Chiefs 3 as the sun set, providing the perfect sounds for the change in light. A quiet Bar Stage quickly filled up as Flore De Hog spun a collection of 60’s girl group classics which had the crowd dancing the night away in no time. Victorian Trout Conspiracy also got the crowd moving quickly as a packed Baino Tent got behind their ska sound and abundance of brass.

At the same time Grumbling Fur who had been initially scheduled to play The Thunderdome had been moved to The Fruit Stand which, if I’m honest, lacked a loud enough PA over the weekend. What was an excellent set seemed to lack the kick that might’ve been acheived from a louder sound. Errors on the other hand had no such trouble. Pounding bass and a light show illuminating the sky provided an excellent end to the Saturday night’s Main Stage. Balkanarama took over the Baino Tent between 11pm and 3am giving folk a selection of Balkan flavoured acts to take them through the night with many a reveller getting well into the spirit. 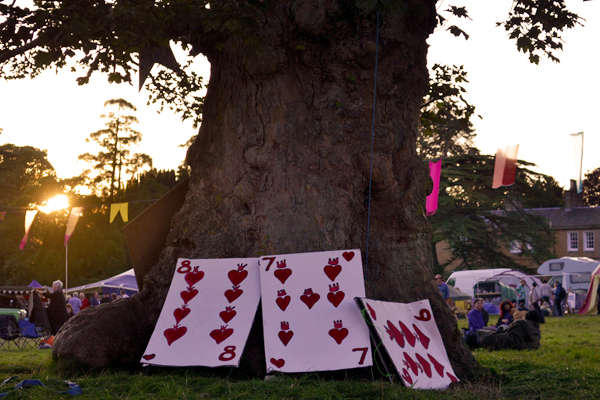 Sunday saw the two-man show Lets Talk About Space present their rather kooky electro songs about space coupled with animated presentations on the Solar System. One-man loop monster Adam Stafford played what seemed like an incredibly short set in The Baino Tent, watching him build layer-upon-layer of his own vocals, beat boxing and guitar parts really is astonishing.

An excellently ramshackle set from The Yawns provided the late afternoon entertainment. Glorious guitar-pop songs all hinged around the antics of frontman Sean Armstrong which on Sunday saw him swinging the mic from the roof as well as falling flat on his back in front of the stage.

Back out in the sunshine Woodenbox ran through tracks from their now pretty extensive back catalogue, including excellent versions of Twisted Mile and Besides The Point. When they did finally play, albeit not on the original stage or time they were scheduled, The Shiverin’ Sheiks tore up The Bar Stage. Their 50’s R&B sound complete with wandering double bass make it impossible not to dance along. Both here and later on The Main Stage(+1) as Strange Blue Dreams it’s kind of hard not to be blown away by the musicianship and tightness of these traditionalists. 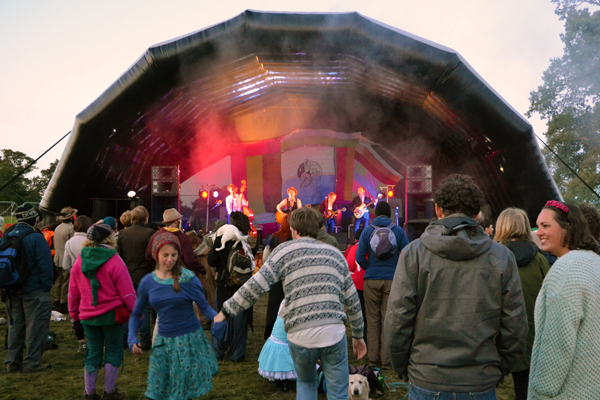 RM Hubbert’s set was interspersed with various interuptions, both from himself, the audience and even a smoke machine at one point. His quiet acoustic style does leave a fair amount of space for drunken chatter to drown out, but regardless he managed to pick up where he left off most times and took it all in his stride while delivering an emotional set. An ill-advised question from the crowd did understandably seem to get to him after dedicating a track to the memory of friend Steve Broadfoot. Main Stage headliners The Wave Pictures gave an excellent set and even took a short power-out and slight collapse of the inflatable stage in their stride. The last act of the night proved an excellent closer – a darkened Baino Tent screeched and squealed to the immense sound of The Telescopes. 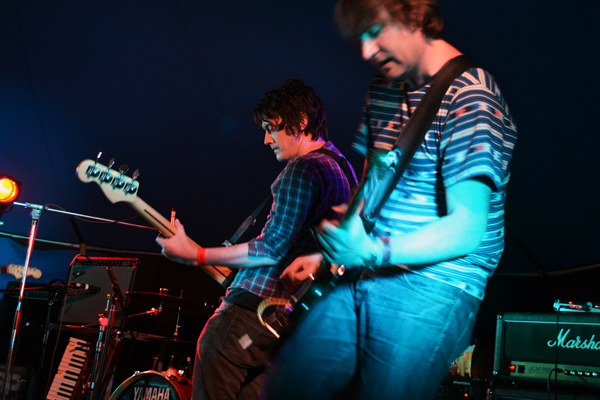 Another excellent year spent Doune The Rabbit Hole in what is one of the most relaxing environments a festival can provide. Let’s hope they can keep growing whilst sticking to their alternative roots, as this really is a gem in what seems to be an ever-growing festival calendar.