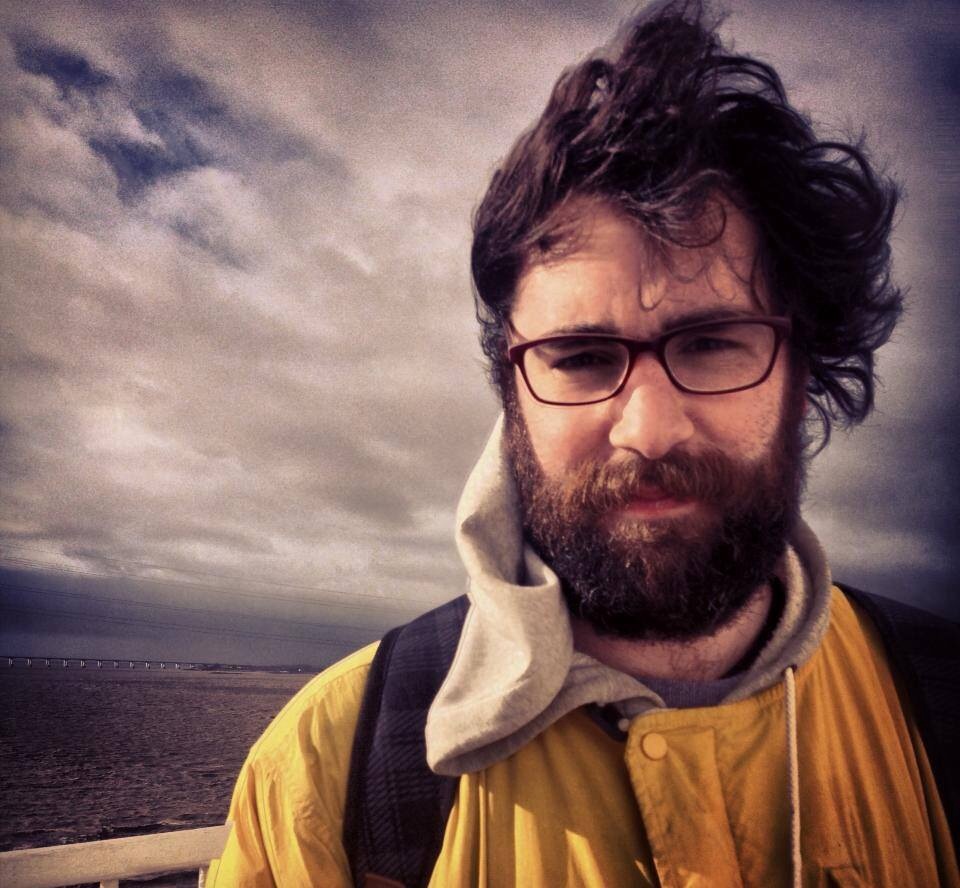 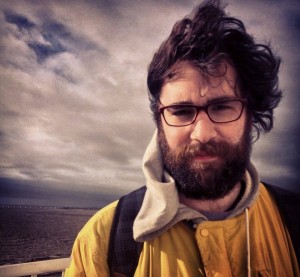 A Carefully Planned Festival is a metropolitan festival in Manchester’s Northern Quarter showcasing a wild cornucopia of musical genres, from folk to experimental electronica to hardcore punk.
Now entering its 4th year, the festival has build its reputation around its eclectic choices and good ear for new music from Mancunia and beyond. Nothing is off its musical limits and this year’s event is promising over 120 new acts.
When we got a chance to throw some questions at Matthew Boycott-Garnett, one of the festival’s founders and promoters, we were very anxious to find our about the secret of ACPF’s success in a very competitive festival market. And here’s what Matthew had to say about the beginnings of ACPF, his own favourite festivals and what it takes to be a festival organiser.

GIITV: What motivated you to run ACPF?

MBG: I think that, in general, I’m motivated by good experiences. If something feels good I want it to continue, or I want to do it again. Going to festivals has always been one of my favourite things to do, so getting involved in organising one came about completely naturally. There was never really a plan, or a particular moment of massive inspiration, it’s just what I do now.

Did you have any promotion experience prior to starting your festival?

I started promoting in 2007 with a live music night in Huddersfield called You Are Invited. Before that, my only experiences had been through friends. A couple of close friends had run a night in Lancaster called Transition and that really opened my eyes to what was possible and how things worked. 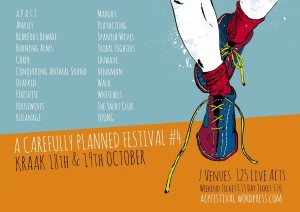 How long has A Carefully Planned Festival existed?

The festival started in 2011. So this is our 4th annual event.

What were your biggest challenges in the first year?

I think when we started (‘we’ being me and Mike Glenister), the hardest part was just not really knowing whether what we were doing was right or wrong. We had nothing to compare it with. Nowadays we can tell whether or not things are going well by comparing where we’re up to with the equivalent time last year. That wasn’t the case back in 2011 and we’ve got to where we are now largely through ‘trial and error’. 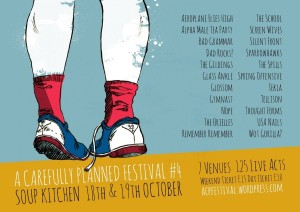 What were your objectives?

I’m quite proud of the fact that my main objectives as a promoter have pretty much remained the same since I started. I want to encourage people to watch music that is ultimately the result of creative, human expression and/or communication. I endeavor to orchestrate an environment amongst which these artists can comfortably deliver their performances to warm, attentive and, most importantly, enthusiastic audiences. That’s it really. Any other patterns are most likely coincidental!

Did you have a concept behind the event? Did you target a certain demographic in mind when you started?

Nope. No. Although perhaps such conceptual festival might well work for other people, I’m much more into the idea of keeping things simple: decent music, nice people, good spaces, cheap entry, sensitive and sincere promo.

What worked and what didn’t work?

I think I’m fairly comfortable saying that the whole thing has generally ‘worked’. People are into it. It’s going well. There’s always little things that go wrong. Amps seem to like breaking, as do drums. Things have sometimes been a struggle, but there’s nothing wrong with that. We just keep going. Keep aiming high and keep enjoying ourselves.

What are the most difficult aspects of running A Carefully Planned Festival?

I’ve said this before and I’m certain it’s true. The most difficult aspect of it for me is remembering to get on with the rest of life during the months prior to the event itself. I must remember to eat and sleep and stuff… And be nice to people. I’m so focussed on getting stuff ready for the festival that I think a bunch of my friendships suffer because I don’t allow myself time for them. The saddest thing about that is that each year, I feel like I don’t even have the time to make it up to people before the same thing happens all over again. Which is pretty devastating. (Sad face) Maybe I should just give it all up. (GIITV – joke alert!)

What are the most enjoyable elements?

Knowing that I’m doing something I have so much true passion for is incredibly reassuring throughout the whole process. Getting to a point when somebody tells me it’s meant something can be overwhelming at times. That sudden feeling of pride in myself just makes me feel like I’m going to burst and I just want to hug somebody or cry. I think that’s kind of enjoyable.

I kind of have a vague policy but the bottom line is that if I like it, it’ll probably fit somewhere. I trust my judgement completely and it’s developed over the years. I hear what I think will work well in a different way to the way I hear music in general. I know what I like – The Dismemberment Plan, Loney Dear, Bjork, Sufjan Stevens – but I can listen to something that sounds so far removed from the way those things sound and know immediately that it’s perfect for a certain slot at the festival.

How do you tend to promote your event?

Mostly on the internet! I have a lot to say about ACPF. Wherever possible and whenever I have anybody’s attention, I like to say as much as I can about it. The last couple of years we’ve had flyers that’ve had a LOT of text on. I like people to spend a bit of time reading them and I think that eventually makes them feel more involved.

How do you fund your festival?

Basically, it funds itself. I pay for everything with the money that comes in from ticket sales/people paying in on the day. The festival’s costing just shy of £11500, which is pretty much exactly how much money we’ll bring in if as many people come as last year. The number of people paying in has increased by roughly 500 each year so far. I doubt it’ll increase by as much this time, but I’d be very happy with any increase on last year. It’d be nice to get 2000 down.

How big is your team?

This year, it’s been mostly just me so far. There are a bunch of people who’ve been heavily involved over the years though. Most notably Mike Glenister without whom the first festival might never’ve happened. This time, Jessica Flavell has been a massive help and there will be four more people who are going to complete the team at the event itself. As well as those people, we’ve got a team of 70 volunteers who’ll be based at each venue and will help oversee things. I’m so grateful to everybody who’s chosen to be involved over the years. It’s a bit of a cliche but the festival really couldn’t happen without them.

What makes a successful festival?

I think you’ve got to be certain of the reasons why you’re doing whatever you’re doing. So long as you know that, you can simply say that what you wanted to happen either has or hasn’t happened. It’s often the case that events like ACPF are judged on the turnout or how much money is made. Those factors definitely need to be considered and it’s true that a good turnout will make everybody’s hard work feel more worthwhile; but ,ultimately, if the events meet the objectives I mentioned earlier I’ll continue to consider them successful and I’ll keep organising them. And, specifically with regard to ‘metropolitan’ festivals, I think it’s really important to get the venues right.

What are your own favourite festivals?

My favourite festival, in general, is End Of The Road. I just went for the fifth time last month and had an amazing time again, The best times I’ve ever had at festivals were probably at Glastonbury 2005, Connect Festival and ATP vs The Fans in 2007, Ten Years of ATP in 2009, The Battles/Caribou/Les Savy Fav­ curated Nightmare Before Christmas in 2011 and the very last End Of An Era ATP and End of The Road last year. I’d struggle to make that list any shorter and I’m already thinking of others I’ve not included but that were also incredible. I had a pretty amazing time at A Carefully Planned Festival #2. Festivals are great!

Any tips on new bands/artists?

I’m putting together a piece about the 15 acts I’m most excited about seeing at this year’s festival. It was impossible for me to whittle it down any further than that. For now, I’ll just highlight a few of my absolute favourites. I’m really excited about Jo Mango, The Old Dance School, Hail! The Planes and Trust Fund. So good!

For more information and tickets visit the festival site.