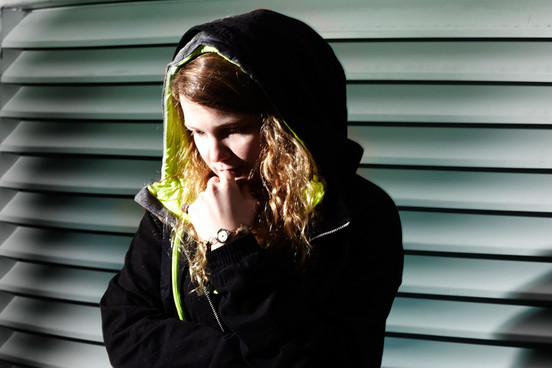 2014 has been Kate Tempest‘s year. Not only satisfied with releasing the best album of the year (so far) Brand New Ancients through Gearbox Records, now she is taking on the world by releasing Everybody Down through Big Dada. These two albums are polar opposites. One a spoken word piece about the concentric lives of two families in London, the second a straight up hip-hop\grime album. You maybe be scratching your head, but they are companion pieces to each other. I can’t remember the last time I was getting excited about two albums from one artist that were released in less than six months of each other!

Everybody Down is a self-proclaimed rhyme novel. Each track is a short story (or vignette) about a group of people living in London and their experiences. Through the course of the album we see the characters find love, get involved in corporate drug deals, feel isolation from society, and go to parties (Anyone who has ever had a night out at a ‘cool’ party will immediately connect with this track). All of this is backed up by Dan Carey’s incendiary production (let’s hope there is an instrumental version in the pipeline!!!). It’s not that Carey has turned the idea of a hip-hop album on its head, it’s that he’s managed to convey the emotion of Tempest’s vitriolic words into music.

Good hip hop concept albums are thin on the ground. Slick Rick and Prince Paul pulled it off in the 80s and 90s, even Mike Skinner tried his hand at it in the 00s, but this somehow works better and seems fresh. This is down to Tempest’s effortless control of the English language. She has no problem mixing up classical English with the phonetics of a gutter snipe. But this is what we’ve come to expect from someone who spent as much of her youth at rap battles as she did spoken word nights.

This album has the right amount of commercial appeal to get the public behind it (a nod by this year’s Mercury Music Prize committee proves this), but it also has enough to warrant repeat listens mandatory. At 27, Kate Tempest is relatively at the start of her career, if this is anything to go by she will be one to watch grow and grow over the years.