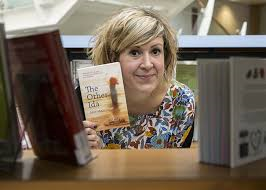 Last week the Dundee Book Prize was announced, and this year’s winner was Amy Mason. Not only is she a writer, but she wrote and performed The Islanders (a show that incorporated a story, music and illustrations) at last year’s Edinburgh Festival, along with Eddie Argos from Art Brut. I managed to catch up with her for a quick chat.

God is in the TV: Hi Amy, First off I’d like to congratulate you on winning the Dundee Book Prize. At any time during the evening did you think “I’ve got this!”?

Amy Mason: I actually knew a while before. It has nearly killed me not telling people. They told me a few months ago so we had time to edit it and stuff. Luckily they didn’t make me do a fake surprised face.

GIITV: How much of the prize money did you spend celebrating?

GIITV: Can you briefly explain what the book is about and why you felt the need to tell its tale?

AM: It’s about the women in an extremely dysfunctional family. The mother, Bridie, is an alcoholic playwright who named her first daughter after her most famous play. The book’s set over the week of Bridie’s funeral, when Ida comes home for the first time in years. I suppose I was interested in the fate of celebrity offspring and how it often seems we know they’re destined to live tragic lives.

GIITV: With your earlier work on the Islanders concerning the subject of growing up in the south of England, are you going to write about your past again? Is this subject closed for now or will there be an Islanders 2 at some point?

AM: Ha. Well, The Other Ida is set in Bournemouth too. I think I might move on for there now though!

GIITV: The Islanders incorporated music into the show, how important was music to you growing up?

AM: Music was MASSIVELY important to me growing up. I was really into Elastica, Kenickie-Come Out 2Nite, Bis, Blur, mega-indie Snakebite City compilations. I used to open my bedroom windows and play music really loud and think I was punk as fuck.

GIITV: Do you still feel the same passion for the music of today?

AM: I still love music and listen to Radio 6 when I’m writing. I’m embarrassed to talk about what I like now though, I’ll end up trying to sound like someone’s hip mum. I listen to lots of soul (my new show has a soul soundtrack), also into the new La Roux album and got that Kate Tempest song stuck in my head. I am so jealous of Kate Tempest, she can do EVERYTHING.

GIITV: What are you working on at the moment? Another book? Another play?

AM: At the moment I’m working on a new autobiographical show Mass, about my relationship with faith. It’ll be at Bristol Old Vic next April.

GIITV: After winning the Dundee Book Prize do you want to assail anyone who vilified you, those who said you were wasting your time and should get “a proper job”?

AM: You’re always told at school that if you want to write you should do it in a more organised way with a clear career path – become a journalist or something – like writing creatively isn’t a proper job. I wish I’d been told that it actually is a job in its own right, I think I would have wasted lots of time trying to do other things. People slag off creative writing classes but I like the way they’ve validated people’s ambitions.

GIITV: Now you’re officially a writer, do you feel that you now have to live up to it somehow? I’m not talking about going all Hemingway, but do you think this award will affect your next book?

AM: I think I lived the life of a writer long before I actually was one! I spent years lying in bed crying because I was a failure, drinking shit loads, then deciding I was a genius… before doing it all over again.

GIITV: Do you have any words of advice for any would be writers out there?

AM: Take classes (adult ed is always good), be brave, get your writing out there however you can.

Again massive congratulations to you Amy for sticking to your guns and following through dream. Everyone here at GIITTV towers is looking forward to the new play next year.

The Other Ida is out now, but you can buy a copy here: