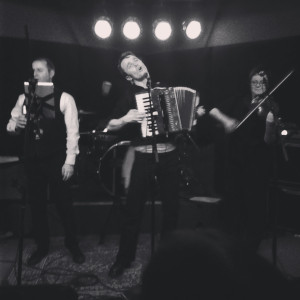 Alluding to pre-gig nerves for this homecoming show, frontman Biff Smith recounts a tale of going for a “walk around the block” to settle himself before a teenage house party he once threw. Tonight as he arrives on stage he admits to having just completed a similar ritual.

A New International are one of those bands who have been quietly causing a stir for years on the Glasgow (and very much beyond) gigging circuit. Bubbling under the surface it would seem, slowly and meticulously putting together the pieces, making sure everything is just right. Previously known as The Starlets until a couple of years ago these guys have been a bit of a slow burner. Now with the long-awaited release of their debut album Come to the Fabulon it might just be that the stars have fully aligned for them.

Having opened with title track Come to the Fabulon Smith drops to his knees to face violinist Caroline Evens as the two duet beautifully on the movie score-esque intro to new single Valentino as the rest of the band await their cue. The band play through the jaunty Marie-Claire after which Smith cuts through the audience/band formalities and gives someone a couple of quid to get him a whisky. This being Glasgow on a Saturday night the crowd happily oblige.

Their sound is hard to pin down, at times they have a real European, Gypsy-folk sound complete with accordion and Yann Tiersen seasoning. At others they remind me of The Coral on tracks such as I’m Your Kind Of Guy (a Starlets track) which tonight feels like it was played at double speed. The band run through a cracking cover of Jacques Brel’s Jackie nodding to one of their many influences and closing track Tenterhooks is another complete shift in sound and really finalises what has already been an incredible set from a band who look set to go on to great things this year.