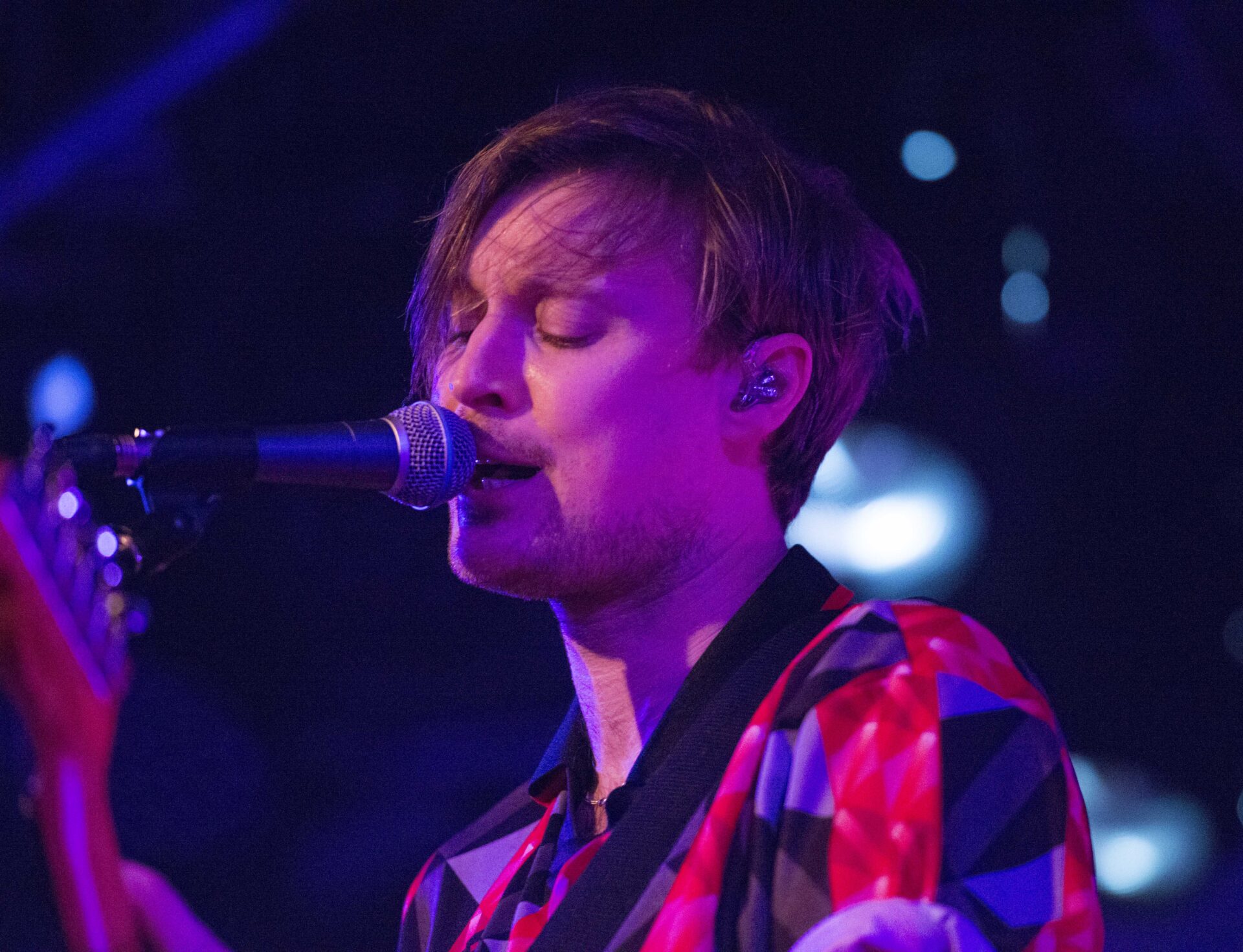 Following a proclamation that they were back in their ‘spiritual home’ from vocalist Vincent Neff, there was no shortage of atmosphere from Edinburgh College of Arts’ lads Django Django as they took to the Liquid Rooms’ stage. With much anticipation, toxins and sweat, the eager crowd embraced the packed floor for a Sunday night of lairy dancing within a strobe-lit room.

After a Scottish defeat at the Six Nations, these boys hit the stage following a support set from Boxed In, who have an affiliation for football, to which their attire attests too. Edinburgh’s Tommy Grace and Jimmy Dixon don the West Germany away top, and a retro blue Adidas striped affair. Far from their much choreographed look of 2012, with their then self-titled album, this change of clothing may well hint at the progression in their music looking toward the May release, the eagerly-awaited Born Under Saturn.

Boxed In, with their single ‘Mystery’, presently splashed over BBC 6 were indeed an appropriate warm-up act for the Django party that we were keen to witness, and inhale (when that was in itself possible). With their indie, at times often brit-pop influenced set, the dancing shoes were worn-in by the time that Vince and the guys graced us with their football shirts.

Billed as their preview album release gig, it was a tad underwhelming for most fans I spoke with, some expecting the revelation of more Born Under Saturn tracks; but they did play new track ‘First Light’ and also introduce us to ‘Reflections’,  another from the May release. There was also the inclusion of ‘Pause Repeat’ in the encoure, which suggest the band are moving a little away from the Calypso, surfer-rock sound, which oft reminded me of Welsh band Y Niwl. There was certainly enough there in the Grassmarket venue to tickle the tastebuds of Django enthusiasts for what’s to come.

With a set list that included fabulous singles, ‘Hail Bop’, ‘Default’ and ‘WOR’ it was obvious that we were going to get little in the way of banter from Tommy and the lads. Their mission was to get the room bouncing, the audience jiving while the schizophrenic lighting was on full-strobe effect. This was most appropriately noticeable whilst we were treated to ‘Silver Rays’, the audience having a fantastic boogie in the crammed packed-out space in Edinburgh’s Liquid Rooms.  Satisfying the crowd it was clear to see that the artists were having a fun time. With a notable wiggle from Jimmy, and energetic movement from Tommy by the synth there was a mutual love for their repetitive weaving rhythmic, psychedelic sounds.

A prolonged version of ‘Skies Over Cairo’ and percussion-heavy ‘Waveforms’ are an instant hit, with an audience obviously craving to hear clearly danceworthy tracks from their self-titled album. Blatantly a satisfied crowd, despite the morsel of Born Under Saturn songs performed tonight, but it’s unquestionable that this morsel has this squad of ravers craving the full aural fillet.

It’s clear that the Django’s interweaving of sounds and genres is going to diffuse into the next record, perhaps with a more structured composition, but this gig certainly resonates with ‘Life’s a Beach’ as the punters wait patiently to leave the venue at the end of the gig. Many take the time to make merch purchases and many head onto the after-party where drummer David Maclean was taking DJ control, led by this resoundingly ostentatious show. Despite the change and progression in sound, one thing will remain the same: the much-loved cavalcade that will trail the next album tour.