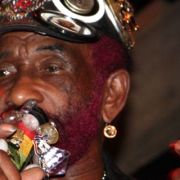 As he heads towards his 80th birthday, Lee “Scratch” Perry could be forgiven for sinking quietly into retirement, as with so many of his peers. But this is a man who embodies the deep, spiritual origins of reggae – a man who shaped, formed and in many ways, gave birth to the modern concept of reggae music. When the roots pass directly through you, you have little choice but to keep on moving with them.

And so it proves at Band on the Wall tonight. The second show of a two-night residence, the room is packed with people of all ages come to witness a living legend. And they are not disappointed. Clad in a remarkable outfit of dragon patterns, geometric shapes and with a shock of bright orange hair protruding from his chin and from under his hat, he croons, growls and resonates into the hand-mirror microphone that he carries around with him. It’s part performance, part shaman. His presence alone is enough to hold all attention but the music dazzles. His backing band is razor-sharp and wonderfully restrained in their playing – the notes hanging like wires from the ceiling of the venue as the throb of the bass shakes and bodies begin to move. Heavy, dub-inflected versions of ‘Sun is Shining’ and ‘Exodus’ are familiar to all but it is when he delves into his own unique catalogue that things become truly fascinating – slow, thick and heady grooves combining beautifully to form a sweet, intoxicating and treacle-like blend of texture, history and sonic joy.

And at the centre of it all is Lee – asking the crowd “can you give me the laugh like the monkey?”, chortling to himself, alternately smiling and glaring at the crowd before taking off into another sermon with that deep, rumbling bass boom of a voice. In many senses, it was perfect that The Clash brought reggae to many people by intelligently reinterpreting Perry’s very own ‘Police and Thieves’ in that the opposite reflection was also perfectly fitting. This man is as punk rock as they come. He doesn’t give a single damn and the world is all the better for it. A legend in his own time and the greatest joy is that we’re all still able to appreciate him.