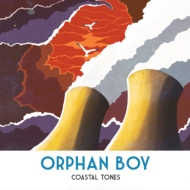 ‘Coastal Tones’ is the returning album by Cleethorpes based four-piece Orphan Boy; a record that paints a poetically mundane picture of growing up in a small seaside town.

Orphan Boy have been self-releasing material since 2006, including two albums Shop Local (2008) and Passion, Pain & Loyalty (2010), before going on to (in their own words) implode in 2011, only to reform in 2012. You may have, like myself, missed Orphan Boy the first time around, as the band were shamefully overlooked. Why were they overlooked? Bad luck? Bad timing? Or a lack of interest towards a band from a town like Cleethorpes? It’s such questions that haunt ‘Coastal Tones’ creating its moody, passionate and atmospheric sound.

‘Beats Like Distant Tides’ perfectly sets the scene, through reverb heavy drums, tremolo guitar and stranded percussion, before the soaring synths of Sam Carlton lead into the elated yet heartbreaking chorus. The kitchen sink drama of The Smiths is found in the notes of bittersweet cuts like ‘Sunken Hearts’ and ‘Bury Your Stars’. Rob Cross plays guitar with the drive of Joe Strummer crossed with a young Paul Weller on The Clash loving ‘Money To Money’, which holds the fiery arrangements of Manic Street Preachers.

Orphan Boy’s attempts at experimentation never fall short, from the changeable title track ‘Coastal tones’, paying homage to the industrial vibes and taunting keys of Berlin-era Bowie, to the sax-heavy Roxy Music esque ‘On A Nelson Skyline’. Vibrant dance grooves chime on the upbeat ‘From The Provinces’, which crosses Depeche Mode 80s synth buzz with the stark reality of The Enemy.

‘Coastal Tones’ is a well-crafted rock ‘n’ roll album; one with the clear intent of no longer being the underdog of the British music scene. They have thrown everything they have at ‘Coastal Tones’ with its mix of pop hooks, euphoric choruses and thought-provoking lyrics. Lyrics that see beauty and passion in the everyday; capturing the ordinary madness of Charles Bukowski alongside William Burroughs’ world of sadness and dislocation. This is most notable in the monologue of homelessness, detachment and broken dreams in ‘Thirtysomething Lovesick Ballad’.

If Orphan Boy had the intention of gaining an army of new fans and going onto bigger things, ‘Coastal Tones’ will mean that they will soon be leaving town.