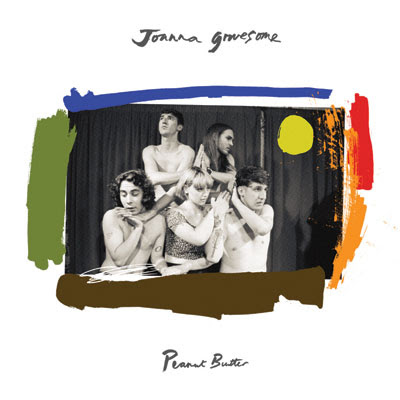 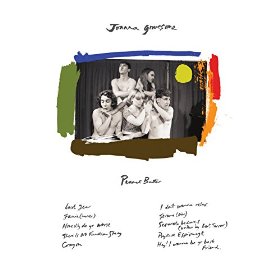 They’re starting to feel like a comfy pair of slippers, this Cardiff five piece, two years on from their debut album, ‘Weird Sister’, or at least they WERE, until the imminent departure of Alanna McArdle was announced at the beginning of June, with the frontwoman citing “mental health issues” as the reason for her decision to quit.

Throughout the two albums, McArdle has certainly embraced and indeed embodied the wilder side in her succinct vocal delivery. This is explored to dramatic effect on ‘Last Year’, the track which opens ‘Peanut Butter’. McArdle here recalls Bow Wow Wow‘s Annabel Lwin’s wilful early eighties abandon, set adrift on George Nicholls and Owen Williams’ squalling guitars, themselves reminiscent of Dinosaur Jr, circa 1989. Of course though, as with all Gruesome tunes, there is a hefty slice of mawkish whimsy (not a criticism, even if it sounds like one) to counterbalance any eccentricities.

John Peel once famously said of The Fall that they were “always different, always the same“, and this can be applied, in spades, to Joanna Gruesome. You can see which direction the melodies are going in from a mile off, yet somehow it’s an endearing trait, rather than a militant irritant. One song that does fairly rebuke my comment there though is ‘Crayon’, which struts into the room as though it is about to defiantly cover Shed Seven‘s 1996 top ten hit ‘Going For Gold’, but then becomes a strident slacker anthem that oozes attitude from its every pore and is an immediate highlight, like something off Weezer‘s first album. Likewise the closing track, ‘Hey! I Wanna Be Yr Best Friend’ is an interesting new direction for the band, a mellow, sparse arrangement that really suits them and it would be marvellous to see them explore such avenues further.

Mostly though, the songs kind of meld into each other, rarely anything spectacular, but at the same time being satisfying enough to keep the Gruesome faithful optimistic. You know the score by now – male and female layered vocals in a twee-pop stylee that would make Belle and Sebastian pea green with envy, but sung at a reckless, lightning pace to a backdrop of fuzzy, furious, frolicsome guitar in an album that’s over before the missus has even got halfway through her weekly shop. Mind you, if we’re talking MY missus, even an Aphex Twin album would be over before she’d got to the Frozen Food aisles, so maybe that wasn’t the greatest comparison I’ve ever made. My point is – it’s bloody short.

Anyway, like I said, Joanna Gruesome were starting to feel like a pair of comfy slippers, so while I’m sorry to see the back of Ms. McArdle, and wish her well in whatever endeavours she involves herself in from hereon, I have to confess there’s a part of me that’s glad that the soles have started to come loose. You wear those slippers too long, and soon you find yourself sliding down a slippery slope into a pool of mediocrity and I’d hate to see that happen. The appointment of Roxy Brennan (Two White Cranes) and Kate Stonestreet (Pennycress) as a dual pronged replacement is an interesting one. Only time will tell if the new arrivals can inject some new life into the format, which worked a treat on the debut, but they’re merely getting away with it here. Something had to give, I think – they wouldn’t have got away with it a third time after all, and maybe Alanna’s departure has given them the chance to live a little more dangerously next time.