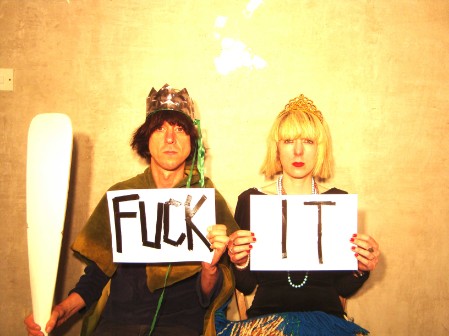 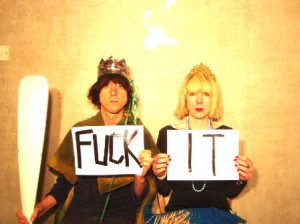 Lancastrian odd pop duo The Lovely Eggs have put together a 10 year playlist of ten songs, one per year, to celebrate the 10th anniversary of Farmfest. This musical gift features a mixture of the great and the good, including stalwarts like Art Brut, Sonic Youth and Kurt Vile alongside lesser known cuts from Hot Pants Romance, Fever Fever, The Burning Hell and Doglegs. Enjoy!

This was the first Art Brut song we ever heard. It was on a compilation tape someone did us and it fucking blew us away. We were just sat there listening pissed up in our front room with our jaws wide open. Total fucking brilliance! We’ve since been on tour with em and become good friends. They are great people as well as an amazing band.

Sonic Youth are one of our all time favourite bands.We’ve seen em a few times. One of the best times was in France at a festival. We were drinking cheap wine from orange juice style cartons with the tops cut off and they started played Teenage Riot and the wine was all spilling all down our faces. A totally joyeous moment! This track is from their 2006 album ‘Rather Ripped’.

Hotpants Romance RULE! They are this amazing garage/noise/pop all girl band from Manchester. We went on tour a couple of times together and just had the best time ever. So much fun and a lot of ciders in Wetherspoons. We did a collaboration with them where we did a raffle every night on tour and whoever won the raffle, we wrote a song about them. We recorded all the songs when we got back off tour and released it as a ltd edition cassette called ‘People We Met on Tour.’ Shake is one of their classics!

We love Sweet Baboo. Steve is so great at writing lyrics. We’ve played quite a bit together on the same festivals and stuff. When we used to come to Cardiff to shoot our videos he used to let us stay in his bed when he was away on tour. He is a very talented man. He also sings on the B Side of our new Magic Onion single in an acoustic version of Magic Onion and also appears in the video as a giant spring onion.

This is a fucking classic is this. The album (In The Court of the Wrestling Lets) which it’s off is probably one of the best albums made in the last ten years. We played with them in London with Jad Fair. We don’t really know anything about them though. But what’s to know when they make fucking belters like this.

In around 2010 I went through a period when I thought all modern music was shit. Then I got my hands on this album and I thought maybe I was a bit wrong.

They’re such a great band. Especially live. Heavy as fuck. They have split up now but once we were on the same label together (Cherryade Records) so we ended up playing quite a few gigs together. I think they are getting a new band together soon so we are waiting for that.

We are big fans of Nation of Ulysses and The Make Up. This is Ian Svenonius’s new band. It’s got his style running right through it. We like it.

Think we first heard this track on Marc Riley’s 6 Music show. It was one of them times when you stop and turn the radio up. We met them at a festival recently and turns out they are also really into The Lovely Eggs. One thing about the DIY scene is that it is a very small world.

Doglegs are one of the best bands around on the DIY underground scene at the minute. The last two times we have played London we have asked them to play with us. Why? Because they are fucking great.

As well as The Lovely Eggs it features performances from the likes of LoneLady, The Gene Dudley Group, Moulettes, Stealing Sheep, Portico, Toyface, Rozi Plain, C Duncan and many more.

For more information and tickets visit the Farmfest site.

1 thought on “PLAYLIST: The Lovely Eggs – 10 years of ‘lo-fi indie from the UK Underground’”