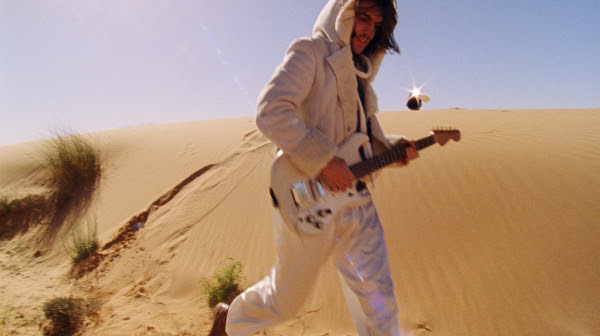 Way back in 2008 Castle Donington four piece, Late of the Pier released their debut album, produced by Erol Alkan. ‘Fantasy Black Channel’ was quite the most playfully imaginative synth punk disco record to emerge from the UK in that period. While others were telling us that the ‘Klaxons sound like the future’, Late of the Pier were making the sound of the future a reality. And then nothing for a very long time. Late of the Pier disbanded and front man Sam Dust spent five years writing, during which time he travelled the world, did scientific research, worked on the creation of a number of new inventions and produced several secret musical projects. Now working under the name LA PRIEST his recently released Domino Records solo album Inji, are the first fruits of that work.

Which brings us to today’s track, ‘Learning to Love’ – a playful five minutes of funky grooving switching back and forth from R&B ballad interludes to insatiable dance floor filling. All decorated with bounding beats and squelchy snyth sounds alongside Dust’s vocal sampling: vocoder affects that sound like they are offcuts from a Doctor Who villain, to slinky, soulful punctuations.  Every pore of this track oozes with creativity, and at the controls is LA PRIEST like some kind of mad professor hatching his plans for a pop invasion in his basement. ‘Learning to Love’ is like some kind of glorious mash up between ‘Discovery’ era Daft Punk and early Prince, but much more twisted than that sounds; this is a pop tune with real heart and vision.