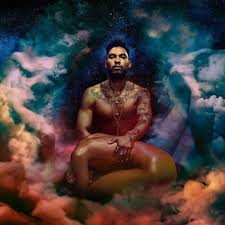 Wildheart is the follow up to 2012’s incredible Kaleidoscope Dream, Miguel’s breakout album that made him one of the biggest names in R&B. His first album, 2010’s All I Want Is You, was solid but only hinted at what he was capable of. The leap in quality between his debut and Kaleidoscope Dream was similar to when D’angelo followed Brown Sugar with Voodoo fifteen years ago. Unlike D’angelo, Miguel didn’t need a decade and a half to make his third album — three years on, and Miguel is back with another brilliant record.

On Wildheart’s first couple of songs, you can tell this album is going to be harder than Kaleidoscope Dream. The guitars sound grittier on the opener, ‘Beautiful Exit’ and on ‘Deal’ the bass sounds heavier and fuzzier. The production isn’t as polished this time round. ‘Deal’ changes pace three times and sounds dense and funky each time it does so. His voice sounds raw on songs like ‘Waves’. There aren’t many songs here as smooth or as instant as ‘Adorn’ or ‘How Many Drinks?’. Most of these songs are slow burners that need repeated listens.

Miguel is yet to have a breakthrough hit in the U.K. Amazingly, ‘Adorn’ stalled just outside the top 40. Lead single ‘Coffee’ should change that. It starts with him singing romantically, “I wish I could paint our love”  which quickly leads into the chorus, “Pillow talk turns into sweet dreams and sweet dreams turn into coffee in the morning.” It’s hard to imagine there will be a catchier chorus all year. Just before the song’s incredible dream-like coda Miguel pleads, “Woman, do you know what you done to me baby?” which feels raw, honest and utterly thrilling. ‘Coffee’ feels like the closest song to Kaleidoscope Dream, as it has a more playful feel to it. Wildheart’s only real flaw is that there could be a few more playful moments like ones that made Kaleidoscope Dream so addictive (‘Do You..?’, ‘Where’s The Fun In Forever?’)

Sex was a big theme on Kaleidoscope Dream (‘Use Me’, ‘Arch & Point’) and that is continued here. ‘The Valley’ is one of a few songs that has a feel of Prince. It has the slow funk of his early 90s funk era, like something from The Symbol Album. Here Miguel sings, “I want to f**k like we’re filming in the valley” In ‘NWA’ he sings about a girl who, “Just wants to f**k like crazy” and there’s the pulsating ‘Flesh’ which is a three minute seduction. Miguel is coming on stronger this time round.

The flow and pacing of Wildheart is one of its biggest strengths. A song like ‘What’s Normal Anyway’ would sound too slight on its own but put half way through, it’s a perfect fit. He sings, “I’m in a crowd and I feel alone, I look around and I feel alone, I never feel like I belong, I wanna feel like I belong.” There’s something comforting about hearing Miguel’s vulnerable side at this point on Wildheart, the rest of which feels like he’s more confident than ever.

The two highlights of the record come right at the end. ‘Leaves’ is stripped down and is mostly just him and a guitar where he sings about California. His voice rises slowly through the song until he sings passionately, “Where did the summer go.” It might just be the best vocal he’s done. The flow into the the closing song ‘Face The Sun’ is a perfect moment. The stunning use of backing vocals and lead up to the solo make this seem like his very own ‘Purple Rain’. A lot of the songs on here feel understated, but this is Wildheart’s unashamedly epic moment.

Miguel has said he feels embarrassed to be compared to Prince as he doesn’t feel like he’s even close to his level of talent. It’s hard not to make the comparison on Wildheart, musically and qualitatively though. It feels like the increase of guitars and the rockier direction is heavily influenced by Prince. A couple more albums of this quality and that comparison will be made even more than it already has.

Wildheart is an album that Miguel has said he hopes will tell people exactly who he is, even down to the title. It certainly feels like he’s being completely honest all the way through Wildheart. He sings of love, sex, loneliness, escapism and death like he wants there to be no secrets between him and the listener. Musically this long player is often quite dense, but lyrically he’s putting it all out there. It’s so exciting to hear someone be so open in this way.

Wildheart isn’t quite as perfect as Kaleidoscope Dream, but it comes very close. It is an album that shows that Miguel isn’t interested in repeating himself and that he’s one of the most exciting and unpredictable singers around. It has already been a good year for R&B albums with Dawn Richard and Jazmine Sullivan putting out their strongest work, but right now Wildheart is the album to beat.