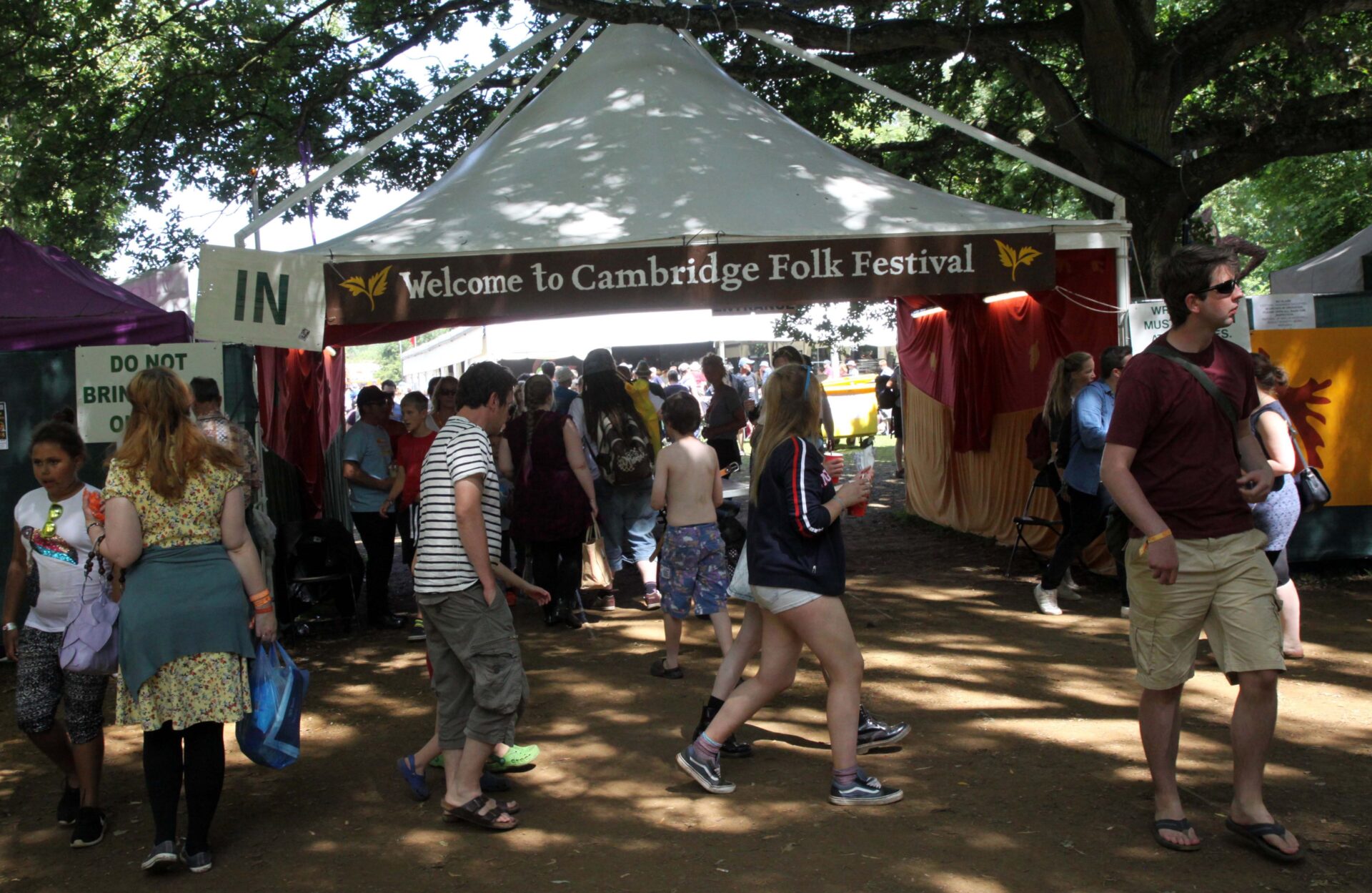 Speaking from the main stage on Friday evening, Frank Turner proclaimed that “Cambridge is an institution in our culture.” A proud, unbroken 51-year history and a well-established reputation as one of the most famous and longest-running folk festivals in the world today, will firmly attest to these words from Hampshire’s own anarcho-folk star. Turner then invited us all to celebrate Cambridge Folk Festival‘s very being and in a mark of respect to its more traditional folk beginnings, treated us to a compelling, largely unaccompanied version of the historic broadside ballad, ‘Barbara Allen’.

As it strides ever onwards into the second half-century of its existence, the festival continues to evolve. Long has it since developed from its more time-honoured folk roots, embracing a much broader musical spectrum that stretches all the way from rhythm ‘n’ blues to country, pizzica and ska. On this year’s impressive bill there is the indestructible Wilko Johnson from Canvey Island, Kentuckian Angeleena Presley, Salento’s Canzoniere Grecanico Salentino, and The Skatalites from Jamaica, all of whom evidence the festival’s ever expanding musical and geographical reach.

Yet for all of this diversity, Cambridge Folk Festival still stays true to its fundamental ethos of political activism and the part that protest has played in folk music down through the ages. Two of the most powerful women in folk embody this spirit.  On Friday evening, Peggy Seeger made the most welcome of returns to Cherry Hinton Hall. Now 80 years of age, the woman about whom her husband Ewan MacColl wrote ‘The First Time Ever I Saw Your Face’, appeared at the inaugural Cambridge Folk Festival back in 1965. Age may have slowed Seeger down a little but it has not withered her. Her humour, passion and still fiercely uncompromising nature shone brightly throughout her performance.

Just over 24 hours later, Joan Baez headlined the main stage. A few years Seeger’s junior, the words activist, pacifist and environmentalist can equally apply to this other legendary American folk singer. For more than 50 years, her voice has championed civil rights, freedom of speech and social justice. This is the woman, after all, who had stood shoulder to shoulder with Martin Luther King in Grenada, Mississippi in 1965 as they led a group of black children into their newly integrated school. Her set did drift into anonymity, characterised by the facile, crowd-pleasing sing-a-longs of ‘The House of the Rising Sun’ and ‘Imagine’, but to have heard her sing the organised labour ballad ‘Joe Hill’ – a song she had famously performed at Woodstock – was truly inspiring and felt like being a part of modern social and political history.

Far less political in her message, perhaps, but with just as stirring a voice was Callaghan. Accompanied by Okorie Johnson on cello, the Lincolnshire singer-songwriter who relocated to Atlanta, Georgia five years ago, lit up The Den on Thursday evening with a delightful set peppered with songs from her new album A History of Now. The Norwegian quartet Katzenjammer drew the first day at Cambridge to a joyful close with a raft of songs that melded country, pop, Balkan folk, cabaret and a heightened sense of fun, all played out on a dizzying array of instruments that included guitars, accordion, banjo and a huge bass balalaika.

On Friday night, the singing Reid twins carried with them the strident strains of The Proclaimers‘ illustrious back catalogue and their own noble belief in an independent Scotland. Earlier Canzoniere Grecanico Salentino had enchanted with an intoxicating blend of traditional Italian folk and dance, while the woman who was one-third of the acclaimed American country band Pistol Annies, Angaleena Presley, showed us her deep, deep love of all things Loretta Lynn. And the wonderful East Riding of Yorkshire duo Seafret continued on their relentless charge around the UK’s summer festival circuit, winning yet more hearts and minds with another inspired performance.

But the day belonged to Wilko Johnson. Everything was present and correct and in its rightful place; the redoubtable Norman Watt-Roy and Dylan Howe on bass guitar and drums; the machine-gun sound of Wilko’s red and black Telecaster; his thousand-yard bug-eyed stare; and a glorious raft of R ‘n’ B inspired tunes stretching from his days with Dr. Feelgood in the mid-70s – ‘Roxette’, ‘Sneakin’ Suspricion’ and ‘Back in the Night’ were all pure gold – to ‘Going Back Home’ and ‘Keep On Loving You’ from last year’s excellent collaboration with Roger Daltrey. Wilko has surely never looked and sounded so good.

The sun continued to shine on Saturday and the West Country’s Show of Hands captured the mood with a blisteringly hot selection of songs both old and new. ‘Roots’, ‘(Let Me Go) Sweet Bella’ and ‘Galway Farmer’ all showcased the versatility and collective talent of Steve Knightley, Phil Beer and Miranda Sykes. Where English rural life featured heavily in Show of Hands’ songs, Gretchen Peters brought a little piece of Louisiana to Cambridge. Her set oozed sophistication, love and no little poignancy. Her interpretation of David Mead‘s ‘Nashville’, taken from her latest album Blackbirds, was achingly beautiful.

In backing all of the leading artists of the day, The Skatalites had helped to change the face of popular music in Jamaica. As they breezed through ‘Confucius’, ‘007’ and ‘The Guns of Navarone’ – where they were joined by founding member and the Queen of Ska herself, Doreen Shaffer – it was easy to see and hear the significant contribution they had made in shaping their country’s cultural identity.

The Unthanks appear to have met at a point where the grandest traditions of folk shake hands warmly with the new before heading off together into a much wider musical vista. Here we had the largely jazz-influenced ‘Mount the Air’ gently undulating into a lively Northumbrian clog dance; the beautifully plaintive elegy that was ‘The Testimony of Patience Kershaw’; and a stunning cover of King Crimson‘s ‘Starless’ that was just as incredible as it was unexpected and which featured Lizzie Jones’ trumpet replicating Marc Charig‘s cornet parts as were first heard on the majestic original.

This time joined on harmony vocals by Daniel Green (proudly wearing a Rozi Plain T-shirt) and Talitha Gamaroff from the band Laish, Rozi Plain once more shamelessly seduced us with a handful of her wonderfully hypnotic songs of which ‘Actually’, from her new album Friend, continued to impress the most.

As Saturday drifted blissfully into Sunday, 2014’s BBC Folk Singer of the Year Bella Hardy was another artist who knew the right combination when unlocking the key between old and new. Her early afternoon set on the main stage was a simple pleasure, an endearing example of how best to marry heart, humour and humility. A little later Mike Rosenberg – who later on would close out the festival as Passenger on the main stage – went back to his own roots by playing an intimate set in the Guinness tent. He had first appeared at the festival four years ago in this self-same location when he had performed to a handful of punters who were queuing for the bar.

The Ukulele Orchestra of Great Britain showed that maybe there really isn’t such a huge distance between Tom Waits‘ ‘Shiver Me Timbers’ and Chic‘s ‘Le Freak’ and Joan Armatrading‘s carefully chosen set-list served, in many respects, as an accurate barometer for this marvellous festival. As her songs shifted between folk, rock, blues and ultimately back to folk again, they illustrated perfectly not only the longevity, diversity and enduring quality of her own career but also that of the Cambridge Folk Festival itself.

More photos from Cambridge Folk Festival 2015 can be found here