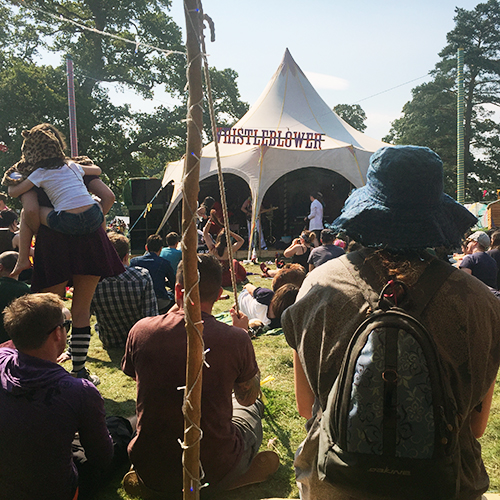 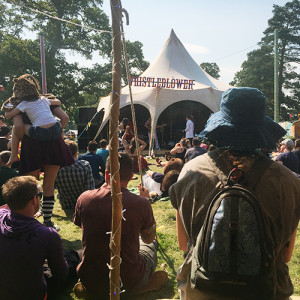 At six years old DtRH is no longer the teething toddler it perhaps once was. It has matured, learned from its experiences, all the while growing an entirely unique personality. It has become slick (in the areas it may once have been a little too nonchalant) without actually losing any of the laid back attitude, charm and individuality it always had. Not only does the festival manage to improve year upon year, but even day to day over the weekend the site is fluid and constantly evolving. DtRH is a fine example of how to create a small scale festival that can be enjoyed by everyone, including the smaller members of the family with a packed weekend of childrens activities. And equally welcoming to four legged family members, a truly dog friendly event.

Arriving on the Friday evening we strolled the short distance from our newly erected tent and into the arena. Whilst selecting our first pint from the bar we could hear the sounds of Palestinian folk two-piece Al Shagaf coming from the small Whistleblower stage just outside. They provided a nice easy start to the night with interesting instrumentation. The first thing I managed to catch on the festivals main stage, The Jabberwocky, was the off-kilter San Francisco four-piece Deerhoof. Disregarding tradition the band played in a straight line across the front of the stage with each member taking equal footing. Ed Rodriguez’s guitar glowing almost neon orange under the stage lights. Drummer Greg Saunierannounced that he was impressed with the organisation and hospitality but quite upset not to be offered a set of furry bunny ears some of the front row were sporting. The Baino Tent hosted DtRH regulars The Cosmic Dead. Loud and heavily hypnotic they thrashed through a quality set of extended psych jams. Synth man Lewis Cook had the misfortune of the table break under his gear but having passed the broken table over the heads of the crowd seemed more than happy to continue the set with the synth on his lap. King Capisce are a band I didn’t know much about but was happy to stumble across their instrumental dual sax, guitar, bass and drums set up. Golden Teacher took full control of the Baino Tent with their psychedelic dance music and as ever put their all into getting the crowd dancing.

The Sunday morning started gently. Having picked up some much needed food and coffee I caught some of Umbongo Nambarrie’s reggae infused set before heading over to see the excellently named Fallopé & The Tubes. Throwing everything into the mix from bizarre costume changes for every song visually, and sounds ranging from pop, 90s dance piano riffs to The Doors ‘5 to 1’ and even lyrics about salty butter (with costumes to match). Back at the Jabberwocky Stage I caught a bit of Insect Heroes. Frontman George Thomas made sure the three-piece filled the big stage by covering every inch with his dancing. As well as music there really is a wide range of excellent activities for kids and adults to get involved in. I sat in on a life drawing workshop from All The Young Nudes, saw kids taking part in sock wrestling, drum circles, puppet making and even a pretty impressive glitter and foam ‘explosion’ over the weekend. The late afternoon slot on The Jabberwocky stage saw Eagleowl bring their brand of achingly beautiful folk tinged pop to a crowd of people happily lying around on the grass in the sunshine. Another DtRH staple are Honey & The Herbs. Their sweet tones and dreamy sound drew a large crowd to the tiny Whistleblower Stage. The harmonies that these guys dish up are ridiculously good. My Saturday highlight was probably The Phantom Band on the Jabberwocky Stage although I couldn’t help wishing there was a bit more darkness for the set.

Helping to shake off the Sunday morning tiredness/ hangover Dr. Cosmo’s Tape Lab were just the ticket. Delightfully bonkers in just about every possible way and running amok throughout the crowd and adjoining bar of the Whistleblower Stage. Whacky costumes and songs about Lobster Man, who: “wants to scratch his arse but he can’t, can’t, can’t” and a series of other characters. Despite all the japing around these guys are all superb musicians and their improvised/ unrehearsed version of The Beach Boys ‘Barbara Ann’ shows it. Prehistoric Friends served up some nice sunshine-tinged pop songs on the Jabberwocky stage. Perfect for the weather which, surprisingly for a Scottish festival, remained mainly sunny throughout. Back on the Whistleblower The Wellgreen kept up the pop theme and their excellent songwriting shines through on tracks like ‘She’s The Greatest’ and set closer ‘Red Light’. Having seen Tuff Love a fair few times I’ve always enjoyed their music but felt the live sets were a little loose and lacking. Here they were musically tight and probably the best I’ve seen them. Glasgow’s answer to The Fall, Girobabies played an excellent set of punk rock tracks on the Whistleblower Stage. Having enjoyed C Duncan’s recent release ‘Architect’ I was curious to see how on earth he would pull together a massively layered studio album for the live show and I wasn’t disappointed. Its not as full perhaps as the album but it still sounded brilliant. 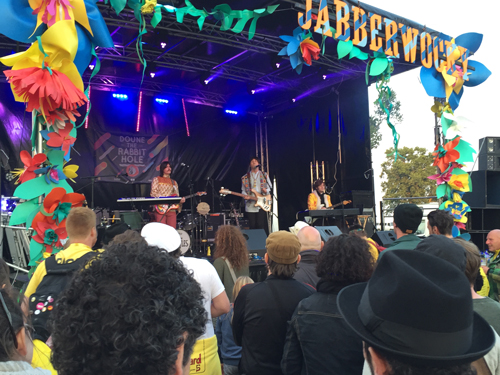 Opening with ‘Tomorrow Never Knows’  Tribute band Them Beatles closed the main stage for the weekend. They had the crowd singing along from the start running through classics such as ‘Sgt. Pepper’s Lonely Hearts Club Band’, ‘Hey Bulldog’, ‘Paperback Writer’, Hello Goodbye’ and remaining in character throughout. For final track ‘A Day In The Life’  they even managed to give realistic brass and string renditions with keyboards. My final, and probably weekend highlight was Colonel Mustard & The Dijon 5 for their madcap live show. Coming in with a sound somewhere around a Glaswegian Black Grape they know how to work a crowd with lashings of audience participation. The icing on the cake was percussionist/ dancer heading out for a crowd surf in an inflatable rubber dinghy mid set. 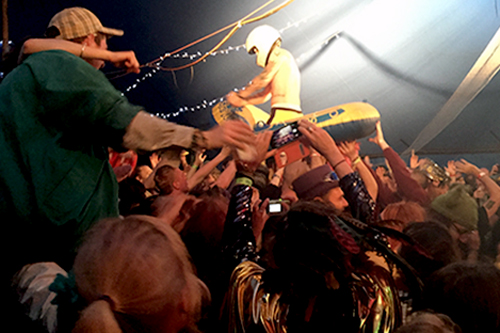 Another fine year of Doune The Rabbit Hole and its apparent they really have paid attention to previous years and upped the stakes. Lets hope there are many more years to come and with an 80% increase in attendance from last year it seems very likely. Unique, small-scale festivals like this that operate as non-profit events deserve to thrive and warrant our full support.

Tickets for next years festival are on sale now here