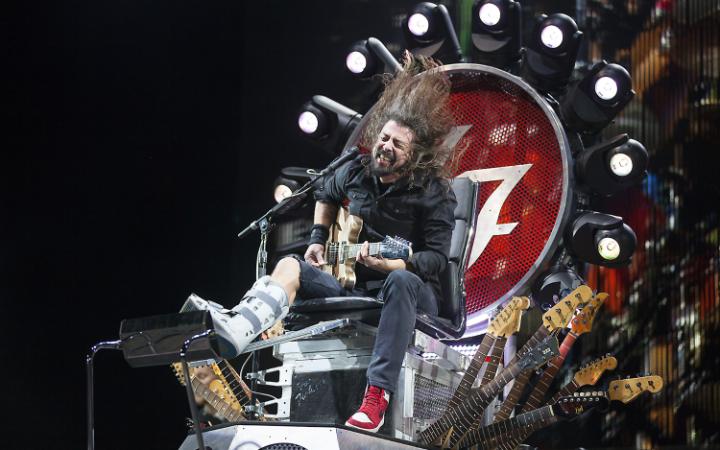 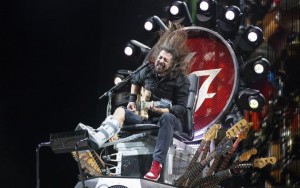 I remember the night that the Foo Fighters cancelled their Wembley gig so vividly. I had just come home from work and crawled into bed when my boyfriend called. He said; “I’m so sorry, but it’s happened, there’s no gig on Saturday.”

A deafening silence followed. You know that weird sinking feeling you get when you’ve just broken up with someone? That’s what I felt. Despite being a fan for well over a decade, I had never seen the Foo Fighters live. This was it and that fucker had to just go and break his leg.

Luckily, Dave Grohl is an absolute legend and was determined not to let us down. I was pretty gutted but the man really hurt himself and his well-being really is the most important thing at stake here. I couldn’t have imagined that he’d get his road crew to build him this unbelievable throne and continue the tour. I was happy enough to just wait for him to get better, but Dave is a machine and you have to respect his devotion to his fans.

We boarded a coach to Milton Keynes on Saturday at noon, eleven weeks to the day the Wembley show was supposed to take place. It was a bit annoying that we had to travel so far out of London for the gig but after a quick chat with a lady who worked in Tesco, it seemed to be a really positive thing for the local area. She told us that the Bowl has hardly been used lately and when big gigs are held there, it really boosts the local economy. Why should London have all the fun? The Bowl was a fantastic location for a show of this magnitude.

We arrived to a real festival atmosphere.  I’m not sure if it was all the food vendors, the Download Festival t-shirts or the abundance of police, but it really felt like a festival. This being said, alcohol of course, was far too expensive as was the food. This is a concept I can never quite wrap my head around after paying around £70 for the ticket in the first place.

I still can’t quite believe that Royal Blood were sub-headlining such a massive gig. Don’t get me wrong, I love them and played their album on repeat for at least a week after it’s release but they are a band with only one album. Despite our jokes about how they’re going to play each of their eleven songs, they put on a great show. It must be pretty scary to front a two-piece on such a large scale but they smashed it. Everyone was dancing and singing along as the sun shone down on us from just above the stage.

The sun began to set over Iggy Pop’s performance. Of course, the man still has it. He was flailing his arms around, strutting around the stage, topless like nobody’s business. We sat up on the green and watched him play all the hits like ‘Passenger’, ‘Lust for Life,’ ‘Sixteen’ and ‘1969’. He may not have put an absolutely insane show like he might have in in his youth but he sounded absolutely perfect. It was an honour to see a rock n’ roll veteran like Iggy doing what he does best. I never would have imagined that I’d ever get to see him, especially at a Foo Fighter’s gig, but I guess stranger things have happened.

We waited, what felt like hours for the Foos. I’m quite little in stature so we stood on the hill to make sure I could see everything on stage. We stood next to these guys who really looked the part with inflatable guitars and we tried and failed to get a mass Mexican wave going. The wave traveled pretty far, but despite our best efforts never seemed to quite make it the whole way around the bowl.

We waited. Led Zeppelin’s ‘Whole Lotta Love’ blared across the field. We waited a little longer and then it happened. The first couple of chords from ‘Everlong’ gently floated in the air and boom, there they were, blasting out one of the greatest songs ever written. It all got a bit much for me as my eyes started to well up. Pretty Rock n’ Roll, eh?

Their set was pretty terrific as they continued with the salvo of ‘Monkey Wrench’, ‘Learn to Fly’, ‘Something from Nothing’, ‘The Pretender’ and ‘Big Me’ consecutively. I was freaking out. Dave talked a lot about his ‘incident’ but I don’t think he had to be so apologetic. It was a really unfortunate accident and it was really out of character for the band to cancel any shows and his determination to get back to the UK was admirable. He promised us extra long riffs and as many Foo Fighters’ tracks in the set which lasted over two hours and they delivered.

In honour of the technician that designed and created the throne, the house lights were turned down and Dave told us to light up the venue. Everyone got out their smart phones and turned on their torches. The whole field was so bright and on the screen it looked like fireflies were lighting up the darkness.

John Paul Jones and Roger Taylor joined them on stage to perform ‘Under Pressure’ as a ‘superdupergroup’. Taylor Hawkins wandered the stage singing with a towel draped around his head as Roger took over his drum kit. I didn’t realise that Queen were the first band to ever play Milton Keynes Bowl and it just happened to be the late, great Freddie Mercury’s birthday. It was such a special moment for us and for the band.

The Foos continued in all their glory blasting out anthems like ‘All My Life’, ‘Times Like These’ and ‘These Days’. The whole time I just kept reliving all the times I sat in my bedroom discovering each new Foo Fighter’s album wailing out their lyrics and becoming emotionally attached to their meaning and the band’s sheer passion.

They played ‘D.O.A’ for the ‘seven’ people in the crowd requested it. It was a little messy but considering they haven’t played it in three years and Dave even admitted he couldn’t quite remember it. He fiddled around with his guitar, figuring out the song’s structure.

Foo Fighters don’t fuck about with encores so they played straight through and finished with Best of You. It was fantastically apt and everyone went absolutely mental.