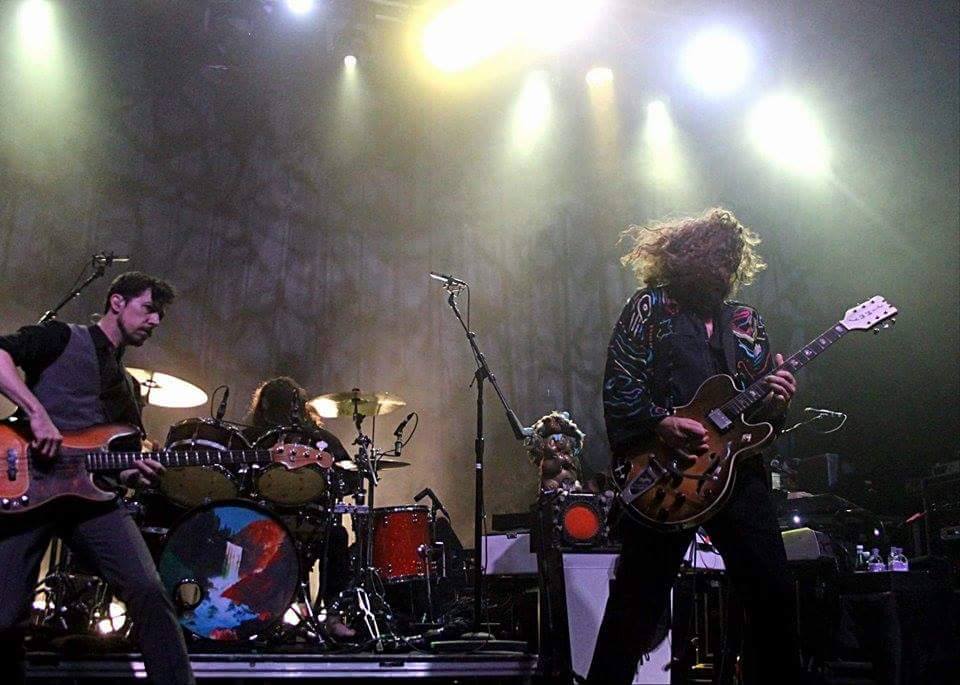 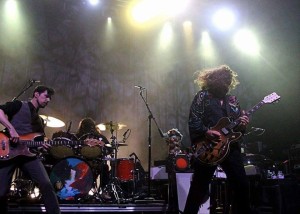 “Just think about it guys. How would YOU like it if there were people you didn’t know hanging around outside YOUR house?”

This was not at all what we had anticipated. We knew the guy we were talking to was in some way part of the My Morning Jacket crew, but at this juncture, were unsure as to which capacity. For now though, he seems to have taken umbrage to the polite enquiry as to whether Jim James and his remarkable band would be willing to sign a couple of CD sleeves for GIITTV’s ace lensman, Paul Reno, who rates them as the best band on the planet. And besides, it’s not their house, unless they’ve all started living together, Monkees style, at The Ritz.

“So…are you guys gonna go someplace else, or do I need to call security on you?”

This was somewhat surprising to us, as we were just standing chatting amicably outside the venue. If you ever saw that old episode of ‘The Young Ones‘ where an irate “TV detector man” comes to the student abode and, with furrowed brow, looks accusingly at Vyvyan and says “Aha! The old trick, eh? Eat the telly!“, well, he was like that, but with an American accent.

I’m not sure exactly what it was that eventually appeased him, but later on it transpired that this was Mark, MMJ’s sound guy, and that, perhaps surprisingly, it turns out that he is actually, despite the initial hostilities, well….a “sound guy”, and man, can he do a grand job!

Manchester’s Ritz venue is arguably one of the best located venues in the UK, being about fifteen seconds walk from Oxford Road train station , opposite both Dog Bowl – a late night bar/bowling alley – and Gorilla, a live music bedfellow that also specialises in good quality food and entertainment. Also across the way, and oozing real character, is the arch of the railway bridge. It’s hard to believe that this has never featured in the album artwork of, say, Oasis, such is its industrial appeal and gritty charm.

Indoors, a decent sized and appreciative crowd has gathered together to witness the impressive support act, Heartless Bastards, and not without good reason. Erika Wennerstrom commands the stage with supreme confidence, leading her band through the kind of gutsy Americana that captivates and thrills with vivacious tenacity. Sure, the vast majority of their set was from their latest long player, Restless Ones, but who could begrudge them that? This was, after all, the finest opening act I’ve witnessed in 2015 yet. I even started to wonder if maybe MMJ had made a mistake in booking them, for fear they might have blown the headliners away.

I know. I’m a bloody idiot.

Jim James is a man of very few words. Several bands have tried, and failed, to convey the message that “Our music speaks for itself, maaaan”, yet with My Morning Jacket, it is irrefutably clear that this is indeed the case. You want artist to audience banter, then you’ve definitely come to the wrong show.

Resplendent in shades and what looked to the untrained eye like a multi-coloured kaftan, James strode around the stage assuredly with quiet menace, while bassist Tom Blankenship’s twitchy, ants-in-your-pants manoeuvres made me feel exhausted just watching him.

‘Victory Dance‘ opened proceedings, and it soon became evident just why this act, as a live proposition, is so highly regarded. The only word that really describes them is “euphoric”, and even THAT doesn’t do them the justice they deserve. ‘Circuital‘, for instance, was not just rousing, but stratospheric, while quieter numbers such as ‘Bermuda Highway‘ and ‘Like A River‘ enraptured their audience with a poignant propensity that few would be capable of pulling off.

Fans from all quarters of the band’s career were catered for here, with the jazzy, almost proggy noodling of ‘Dondante‘ from their critically acclaimed 2005 album Z a particular highlight, while ‘The Dark‘ gave the Kentuckians’ longest standing fans a moment to savour. As you would expect though, a large slice of the pie was reserved for their astounding recent seventh album, ‘The Waterfall‘.

You know, really I’m just reeling off song titles here, and quite frankly, it is impossible to elucidate just how great they were without you actually seeing them for yourself. I’ve seen thousands upon thousands of gigs in my time, and you know what? This one is up there with the very best of them. Simply magnificent.