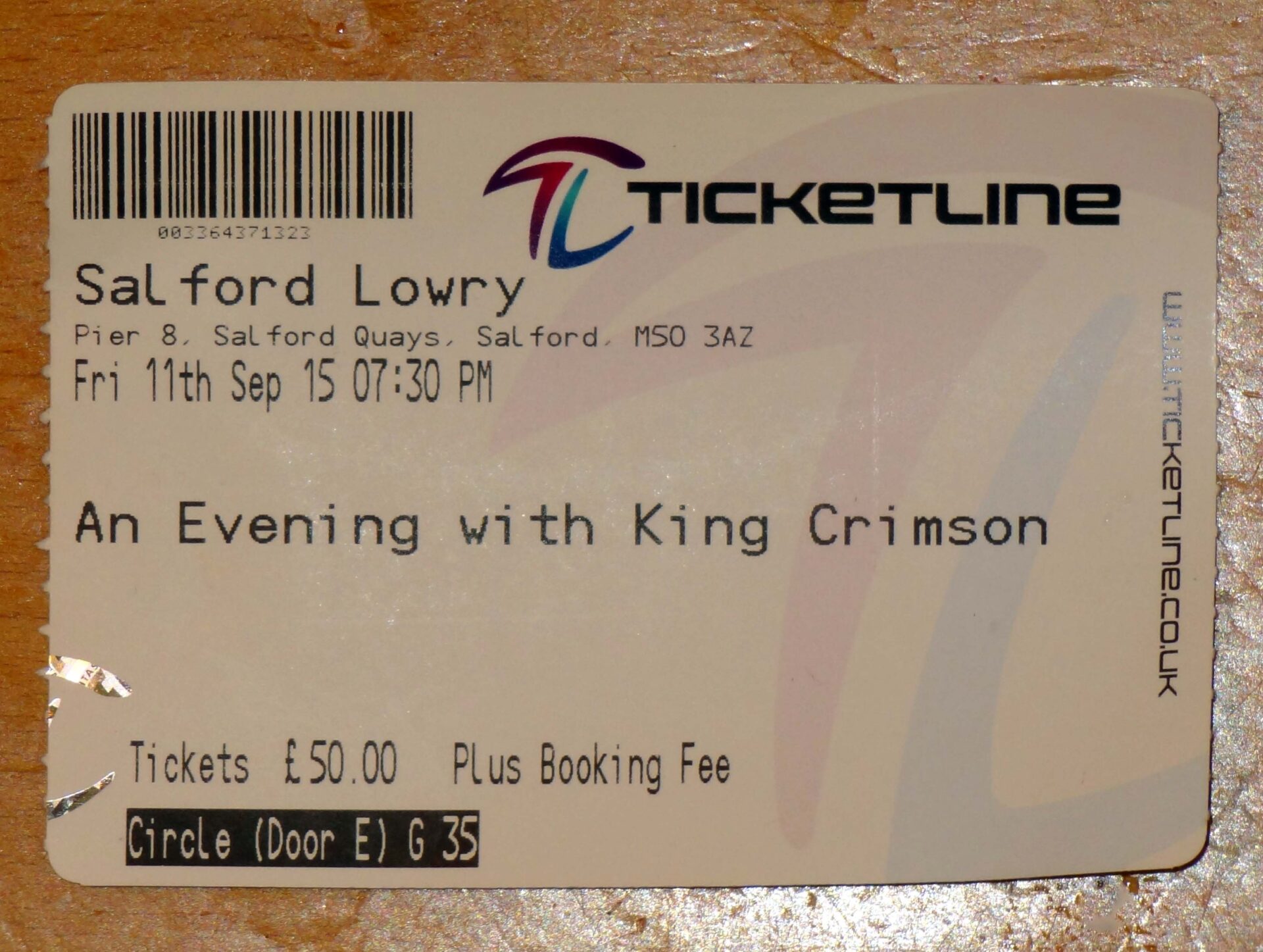 Forty-two years since last having seen King Crimson – at Glasgow Apollo in October 1973, a show featuring Robert Fripp (guitar and mellotron) David Cross (violin), John Wetton (bass guitar and vocals), and Bill Bruford (drums and percussion) that presaged the release of their sixth studio album Starless and Bible Black and one that marked the band’s first ever live recording – the standard bearers of prog-rock are back.

This is King Crimson, Mark VIII. Of that Glasgow line-up only Fripp remains. He has been the one constant in the group since their incarnation in 1968; the sole custodian of the Crimson name for almost 50 years. Presiding over a multitude of personnel changes and functional hiatus, his has been an apparently benign yet clearly ruthless dictatorial presence throughout the band’s entire history.

Having announced his retirement from music three years ago, Fripp’s motives for this UK tour – the first dates the band have played outside of London since 1982 – may well be financially driven. But given the complexion of the set list – Crimson will go on to perform songs, some of which have not been heard live in more than 40 years – there is a strong sense that these shows may well be the last; Fripp finally bringing to a close the life of King Crimson in the live arena, showcasing for just one more time some of the most celebrated moments in their inspired musical legacy. The inclusion of the first new material that the band has written in more than a decade, though, leaves the door tantalisingly open.

This embodiment of King Crimson forms a seven-pronged attack. As if in military formation, it presents itself in two broad flanks. To the front are three drummers, protecting a back line that includes saxophonist and flautist Mel Collins; the man who had replaced Ian McDonald’s original role in King Crimson, but who hasn’t played with the band since 1974, is once more reunited with Robert Fripp. Fripp himself assumes a position at the rear of the stage, attired in a three-piece suit and armed with a Les Paul. His headphones merely add to the impression of him as some remote commander-in-chief directing musical operations from afar.

As was the case at Glasgow Apollo all those years ago, King Crimson open with Larks Tongues in Aspic, Part One. The intricacy and resonance of this bewildering amalgam of the classical, free jazz and progressive rock has not diminished with age. What has changed is the precision with which it is played. There is absolutely no room for error in this performance; Fripp’s very presence sees to that.

For two hours, King Crimson take us on a journey through our shared pasts, giving us brief glimpses of the present along the way, with music that belongs somewhere in an as yet uncharted future. Songs, some of which like ‘Epitaph’ are now nearly 50 years old, sound fresh and alive. It is really only Pete Sinfield’s florid, occasionally overwrought lyrical imagery that indicates their genesis lies in a completely different era. The construction of these songs is almost scientific – as if developed from some elaborate and incredibly complex sonic formulae. It is at once deliberate, dramatic and demands much of the listener.

Yet for all that the music of King Crimson is cerebral and targets the head, it still has the capacity to touch the heart. Fripp’s rapidly escalating guitar in ‘The Sailor’s Tale’, the fluidity of which is quite simply astonishing, meets Mel Collins’ saxophone in cosmic combat. The huge emotional aftershocks of this titanic battle can still be felt hours later. And the concluding ‘Starless’ – probably the greatest composition in the entire King Crimson canon – is as beautiful as it is moving. Despite its length and the elaborate structure of its movement, ‘Starless’ is the antithesis of all those hackneyed criticisms of conflation and pomposity that are invariably levelled at progressive rock music. As the song moves towards its euphoric coda, and as if by sleight of hand the baton of Jakko Jakszyk’s guitar arpeggios passes seamlessly to that of Fripp. It is in that imperceptible moment alone that the importance of King Crimson’s music today is captured as they continue on their incredible quest to expand the frontiers of sound ever further.