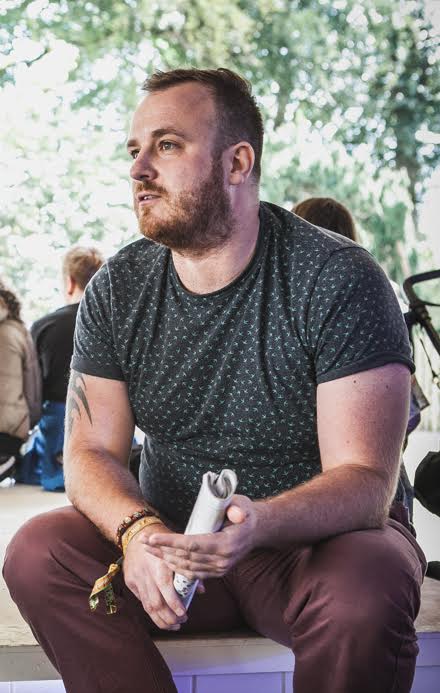 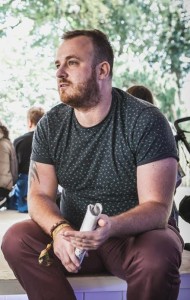 Titus Monk (aka Adam J. Qüæck) has been approached by major labels and praised by titans of the music business. Hailing from the hills of North Wales, he is a champion of uneasy listening, a hero of anti-genre and a true maverick of sound.  Recently signed to Strangetown Records, the label run by Super Furry Animals’ keyboard maestro Cian Ciaron, Titus Monk is ready to unleash his sonic superpowers onto the world.

How are you finding Festival No6?
I suppose when you’re having your first real gig as a band instead of playing solo, it’s always nice to have a local backing. It’s nice to be on your home turf, but yesterday was a real shock to us because the audience was just getting bigger and bigger. There were people all over the place!

Was this your first festival gig as a band?
Yeah, as a band. I played Swn festival down in Cardiff last year, but I couldn’t do a proper set ’cause I didn’t have the band with me. Had to do an acoustic singer-songwriter thing. Hopefully, it just shows the dynamic nature of what we do. If we need to do a singer-songwriter stuff I can do it on my own, but at the moment the idea is to keep it funky, jazzy and big band. And more than anything to have fun.

Your set and your gold-and-purple cape/wrestling outfit certainly felt quite subversive.
(Laughing). We just listen to so much different stuff as a band. I write the stuff and they just put their own stuff to it. I’ve tried to get Rob, the bassist, in a band for years and it’s never pulled off. But this time I said, “Come and play with me at Festival No6. We’ll have weekend tickets.” He was immediately like, “Yeah, I’m all over it; I’ll do it.” And he took days off work to practice in the build-up to it. The commitment and the friendship of the band is great!

How did you all get together?
I know a guy who knows a guy. (Laughing). I went to see a guy called Gai Toms who plays around here. I asked him about his brass player, got his details and then it just kept rolling. You start finding out about different people. Social media is amazing for networking. I put up something about wanting a flute player on Facebook. Within about half an hour somebody I knew who is a drummer said, “Ok, I play the flute as well.” I replied, “Ok, come and jam.” It’s just been crazy, like a snowball effect. We thought we may have four or five members but ended up with ten.

And you have a fresh new release, of course.
Yeah, last month we released an EP on Strangetown. Yesterday we played two tracks from that EP, but most of the stuff we did here is from the next EP. Then again, at the next show we might play stuff from the first EP. We just want to keep it progressing and keep it fun. It’s all about creating something that people don’t hear that often.

How did you get involved with Cian?
I sent him a message. Literally, just sent him a message ’cause some people in the band know him. (Laughing). I had a couple of offers from labels, but they were across the pond and they wanted me to do mainstream rock stuff that I wasn’t interested in. So I just got in touch and asked, “Have you got any advice?” And Cian offered to master and produce my music for me. He’s been awesome.

Are you a big fan of Super Furries?
Yeah, yeah, huge fan! They’ve been so inspirational and influential on Welsh music. Again, they’re not afraid to swap genres half way through a set, using weird electronics Cian uses. It got me thinking that I should do that. I emailed Cian before coming here and told him I was nervous about playing No6, and he said, “You’re never going to be ready. Nobody is ever ready. If they’re, they’re practising too much. Have fun and go for it.” And that’s the advice we stuck to. If we think about it too much we’ll stumble, so let’s just go for it. Let’s enjoy it.

Is your band now a fixed entity in terms of personnel?
I’m hoping to build a tight unit; that’s the idea. If people come in and out it’s fine, but I’d rather get a close-knit bunch who’re used to each other. We all get on; we’re all friends. I don’t want to move it around too much. It can shrink, we can go down to four members, but I want to bring the other ones back in.

You’ve described your music as anti-genre. What did you mean by that?
Well, hopefully, you’ll see over the next three EPs and an album.

Three EPs followed by an album – is that your plan?
Well, a few EPs and then an album. There could be anything in there: a country song, a classic rock track. We’ve got loads of stuff mapped out. It’s just a matter of keeping people guessing and keeping it interesting. If you listen to the first EP you’ve got a sort of soundscape, then you’ve got a funky soundtrack thing, a couple of jazz songs and it ends with an 80s rock song. I don’t think music should be about being constrained to a certain genre. I think if you want to express yourself one way or the other you should just do it. That’s very much my attitude – do it and don’t let someone stop you.

What are you working on now?
It’s very relaxed because at the moment I don’t tend to work very well under pressure. Cian just said, “When you’ve got it – when you’re ready – we’ll work on it.” It won’t be long. I should imagine the next EP will be out in the next month or so. There is no name yet. It all depends on what we’re doing next, whether it’s another couple of EPs or a full album. It’s just a matter of rolling along with it and keeping the momentum.

You can see Titus Monk in action on 2 October 2015 at Neuadd Ogwen in Bethesda. For more information click HERE.