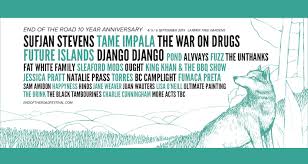 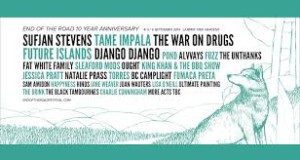 By day, peacocks roam freely around an old Victorian pleasure garden. By night, twinkling lights adorn a fairytale forest and drunk girls commandeer a disco-ship. Welcome to the Larmer Tree Gardens in Dorset, where celebrations are taking place for the 10th Anniversary of End of the Road festival.

I’m sure most festivals are founded by music lovers; but do all curators deliver hand-written notes to their favourite bands, asking, “please come and play for us”? It’s just one example of the impressive level of care and attention that appears to have gone into all aspects of this gorgeous little festival: from the art exhibitions in the forest, to the schedule itself, which has been meticulously crafted to allow for maximum musical enjoyment and minimal clashes. Team EOTR have been honing their skill since 2006, and the result is a triumphant small festival with the benefit of a decade of experience under its belt, plus all the joy of an actual 10-year-old at a birthday party.

Looking back at the line-up fills my heart with glee: did we really see all that awesome music?  Friday night kicked off with a real treat for psych-fans. The crowd go crazy for Pond in the Big Top, which is possibly one of the most beautiful tents I’ve ever stepped foot in. Swathes of starry sky are draped across the ceiling and walls, while a baby elephant hangs merrily from a dinky hot-air balloon. It’s the perfect setting for Nick Allbrook to fire squealing space-age riffs at us like streams from a plasma gun; if you had the audacity to bring any minor, niggling worries with you this weekend, they are soon melted away, as Pond transport you to a happier place, made of trippy licks and spiralling strobes.

Out on the Woods Stage Django Django embark upon their final UK festival show of the year and if they’re tired, they don’t show it. Relentless touring with the new record Born Under Saturn has married their charm with their stamina, as they hop around the stage all jangly guitars, freaky synths and voodoo percussion. New songs Reflections and First Light fit coolly into the set like the slightly more grown-up older siblings of classic highlights Wor and Cairo, and a broken guitar strap is dealt with quickly and professionally. Shout-out to the one girl, stage left, who was pogo-ing consistently throughout. You go, girl.

We wander over to catch Fuzz who are having a real rocky time out on the Forest Stage. Ty Segall is a really good drummer, and along with Charles Moothart’s annihilating riffs and Roland Cosio’s groovy bass work, this San Francisco power-trio whip up a bit of a storm.

There are no words that quite do justice to Tame Impala’s headline performance; blissful, emotive, and sensually psychotropic. Kevin Parker’s kaleidoscopic love songs wash gently over the enamoured crowd while rainbows bleed across the stage. It’s that special kind of set, filled with magic moments and mass sing-alongs, that when it’s over you turn to your friend for a big soppy hug. We all leave swooning.

The Tipi Tent offers music late into the night, starting with kraut-pop wizard Jacco Gardner and his immaculate multi-instrumentalist weirdness. I note that I would have preferred to watch him in the sunshine, but I enjoy his set none the less.  Returning here in the early hours of Saturday morning, after a stint of improvised comedy in the woods, I happily stumble across Meilyr Jones performing a surprise show. The former front man of Cardiff’s psych-pop superstars Race Horses captures the imagination of the inebriated crowd with his new solo material, a stylish blend of dandy baroque-pop.

Being a sucker for Welsh music, I’m pleased to report that this is not the only Welsh act I see over the weekend. H. Hawkline takes to the Forest stage on Saturday, clad in a long black cloak, performing hits from his Welsh Music Prize-nominated debut album, In The Pink Of Condition. The record is his first release since signing to Heavenly Recordings, who have curated today’s stage with favourites from their current roster, in celebration of their 25th Anniversary.

Also flying the flag for Wales are hot-and-fresh super-group DRINKS, the new collaborative brainchild from Cate Le Bon and White Fence. Today they have certified busiest-man-in-Welsh-music Stephen Black (aka Sweet Baboo) on bass and Daniel Ward on drums. They’re all painfully talented in their own right, and between songs you feel a bit like the world’s luckiest fly, who just happened to land on the wall of the studio where they’re jamming.  Woozy West-Walian psych locks horns with glorious San Francisco garage and the result is something stylistically diverse and oozing excitement. Improvised wig-outs are aplenty, and sometimes they just make straight-up noise for two minutes at a time. Tim Presley is on fire; he and Cate share a pure creativity, which is a joy to behold. The chaos is moreish.

My other Heavenly highlight is Stealing Sheep, whose intricate rhythms, Eastern scales and intelligent harmonies keep songs like Shut Eye sounding as lush and impressive as they first did three years ago.  If ever a festival made us want to start a girl band, it was this one. Ex Hex churn out ballsy, spirited, life-affirming punk rock with flashes of Blondie and flickers of pure pop joy. Do a quick google search on the individual members’ back stories and you’ll see why these three women have the industry wrapped around their little finger. Meanwhile, Spanish outfit Hinds deliver jangly, unapologetic surf pop with a scuzzy 60s snarl.

In fact, the line-up boasted a refreshing abundance of women, be them solo artists (Jane Weaver, Natalie Prass, Laura Marling, to name a few) or female-fronted bands. I happened to take a detour to the grilled cheese stand on the way to catch Alvvays, and my sticky goats cheese, honey and walnut toasted sandwich, grilled in floral rosemary butter (SO decadent), was the perfect match for the Toronto five-piece’s sun-drenched sugar-sweet indie-pop set. The Guardian estimated that 44% of acts on the bill featured at least one woman  – high fives all round! – and with a smorgasbord of wickedly talented ladies left, right and centre, one that made a lasting impression was Du Blonde. Beth Jeans Houghton has been of noteworthy interest for some time (it’s three years since she released her debut album with the Hooves of Destiny) and EOTR was the first opportunity I’ve had to catch her since the rebirth: a theatrical transformation of character, à la David Bowie.  On stage she is unequivocally endearing, a whirlwind of feline energy and goth pop noir. Between songs she engages in goofy stage banter, at one point deliberating who in the crowd is going to buy her the most burgers.  Though she claims she’s recovering from a 5-day viral infection, the Newcastle singer rattles through emotive ballads and catchy metal bangers with equal flawless ferocity. I leave wanting to buy her record. I would also like to buy her a burger.

Naturally, Saturday night belongs to Sufjan Stevens. It is truly an honour to savour every last particle of his performance, every atom of this spectacular artist. The ability to express the human condition with such raw clarity must be as much a burden as it is a gift, so it is understandable why his gigs are more sporadic than his fans might wish. He plays what I believe to be his first UK festival appearance to a rapturous audience, and on this special occasion, on EOTR’s 10th birthday, it becomes clear we’re watching a genius.  His music goes straight to the heart; to drink up every last magical drop of this sweet sonic nectar, like a tonic for the soul, was an unforgettable privilege.

Sunday evening takes us from Wand in the Big Top to Mac DeMarco out in the Forest.  Hailing from the same close-knit LA crew as Ty Segall, White Fence and Mikal Cronin, Wand are a powerhouse quartet of crunching garage and lo-fi psychedlia laced with glam nostalgia.  It’s seriously heavy and seriously good. Mac DeMarco on the other hand, lulls his enormous crowd into a peaceful, mellow euphoria, softly cooing his lyrics as if whispering into the ear of a lover… before yelling like a madman and completely goofing out with his band mates. Oh, Mac. He bops gently through fan favourites Blue Boyand Ode to Viceroy, as well as new tunes from his recent EP, of which the cheerfully soppy I’ve Been Waiting For Her is definitely a highlight. On stage, guitars fly perilously through the air while Mac is nowhere to be seen (he leaped into the crowd long ago). When he returns to the stage to bring his set to a close, he is wearing a pink wig. Team EOTR join him on stage and we all sing Happy Birthday to them, before a birthday cake is thrown into the crowd like confetti of sponge and frosting. It all sounds like a crazy dream and I can’t guarantee that it wasn’t.

“We’re camping here tonight, we want to party with you guys” Mac tells us; and true to his word, later on we spot him, crowd surfing again, being carried out of the late-night Hinds Tipi show. When I bump into him later, taking advantage of the free bar at the aftershow party, he is out of his mind, but sweet. It’s all just one big crazy party.

There’s something wonderful about End of the Road. It’s quintessentially British and, yes, it’s frightfully middle class (being awoken to the sound of chamber music is not an exaggeration), but if a festival has longer queues for the gin bar than the portaloos, hell,  I’m on board. Consistently clean toilets and luxurious showers were a joy, and the facilities and food choices were second to none. If only there had been more time to lap up the impressive Comedy and Literary line-up; regrettably we only caught snippets of Phil Jupitus and Robin Ince. Many a happy hour was spent at the silent disco, on the light-up dancefloor, or simply wandering through the forest (boomerang bowling, anyone?), and the End of the Road ethos could be felt round every corner: it’s all about having the time of your life, and good music. The best music and the best time.

Big Top headliners and End of the Road favourites Brakes reunite to celebrate the ten year anniversary of their debut album Give Blood. They’ve played eight of the ten festivals, and say it’s “without a doubt our favourite festival in the world”: a sentiment echoed by so many of the artists we saw this weekend. When the bands love it as much as the crowd, you know you’re onto a winner, and End of the Road certainly are. There’s a reason Early Bird tickets for End of The Road 2016 sold out in 2 hours. This place is simply magical.