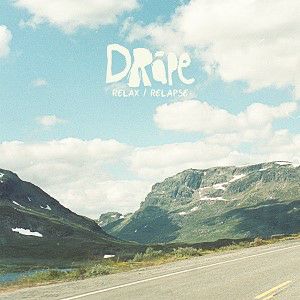 I first became aware of Oslo five-piece Dråpe, (pronounced Draw-peh), about three years ago, when Simon Raymonde (Cocteau Twins bass player / Bella Union boss) posted on Facebook that he was going to see them and that he really rated them. In a fit of spontaneity, I went straight to iTunes and downloaded their eponymous five-track debut EP and was really impressed with it. My Bloody Valentine were very much the chief influence on that first release, with the guitars tuned distinctly to Kevin Shields-ish.

Fast forward to Autumn 2015 and Dråpe are releasing their second album, Relax / Relapse, and to be honest I was expecting more of the same (and that would have been fine by me, too!) However, from the first seconds of this record, it is clear that the band have expanded their horizons and musical palette. Opener ‘Relax’ is sadly not a Frankie Goes To Hollywood cover, but a brief, sparkly instrumental that leads straight into ‘Replica’, which is a sweetly melodic, almost 60s-sounding psychedelic treat of a song.
There are certainly hints of The Flaming Lips floating around the album, not least on ‘?’ (the song title is actually just a question mark) and ‘There Is A House’.
‘Pie In The Sky’ is the lead single from the album, although in truth, pretty much anything here (except for the aforementioned ‘Relax’) would have made a suitable single, so strong are the tunes. According to singer Ketil Myhre, the song is about naivety and living in denial, and apparently was recorded shortly after he had broken two ribs falling from a balcony!

‘My Friend The Scientist’ sounds like another single, while ‘Still Raining’ comes across all Tame Impala, if they had borrowed Beach House‘s keyboard and guitar effects unit. ‘And You Change Your Mind’ is an up-tempo track and a really pretty song with delicate guitar and keyboard details above Myhre’s fragile but tuneful vocal, and another which demonstrates the significant melodic development of the band over the last couple of years.
It’s a really strong set of songs, and at 36 minutes, it doesn’t hang around for too long. “We are crawling around” goes the refrain of closer ‘Relapse’, but in truth Drape are flying on this charming album.
[Rating: 4]
Released 9.10.15