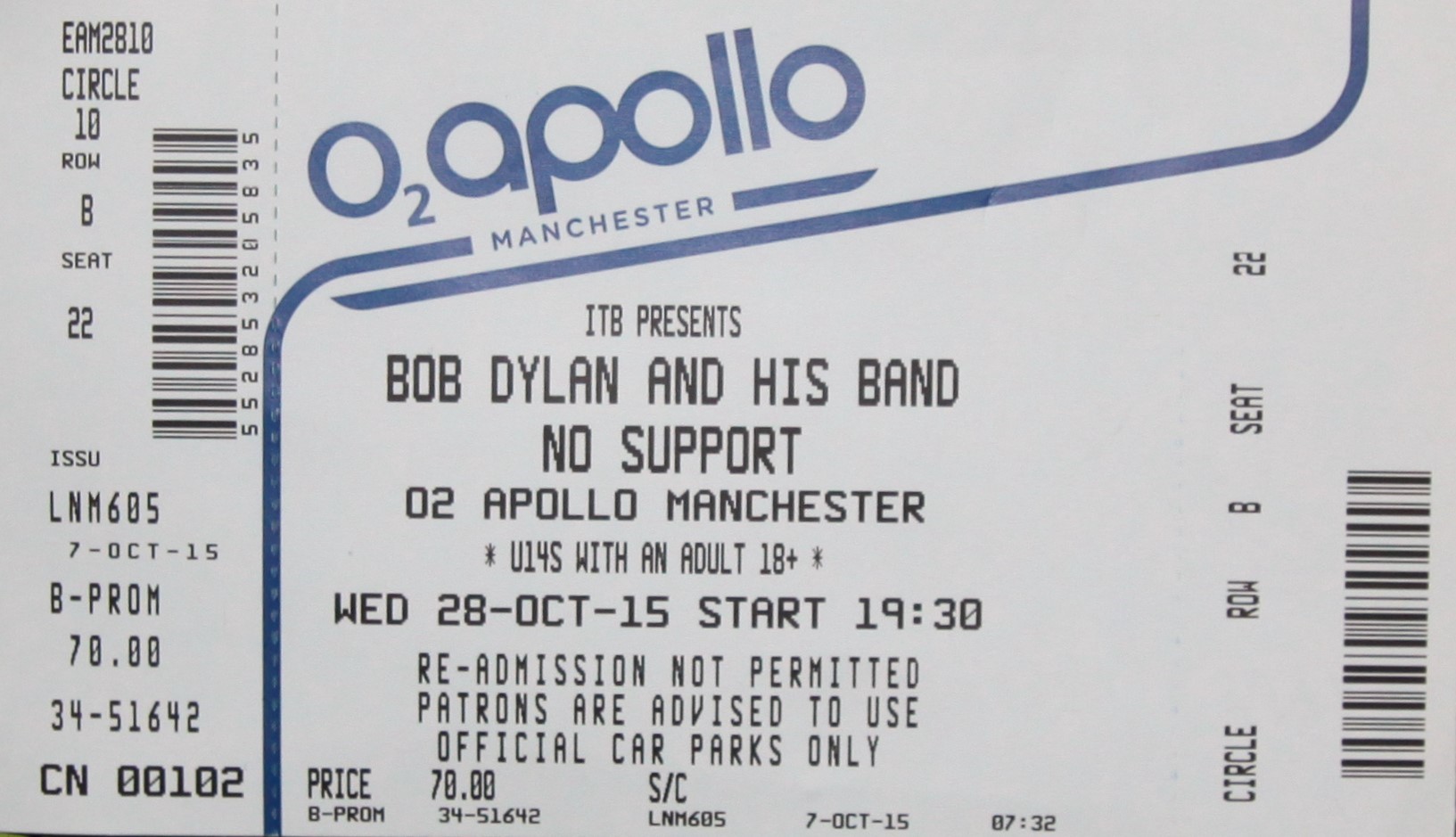 He has been making music now for more than fifty years. He has released 36 studio albums and collaborated on many more with most everyone you could care to mention from Johnny Cash, Willie Nelson, and Neil Young to The Band and The Grateful Dead. He has hosted his own radio show. He exhibits his own paintings and sculptures in galleries all around the world. He has written one volume of an autobiography and two more are in the pipeline. And when he plugged his Sunburst Fender Stratocaster into a guitar amplifier at the 1965 Newport Folk Festival in that one single moment he completely changed the course of contemporary music. His name is Bob Dylan and he is 74 years of age.

Quite why a, presumably, financially secure artist like Dylan continues to step onto a stage night after night on the so called Never Ending Tour to perform songs of protest, introspection, interpretation and the deepest illumination is a question maybe even he cannot quite fathom. You sense that if he stopped doing this he would somehow cease to exist. You also believe that like many others of a similar vintage it would be a damn sight easier for him to merely go through the motions and trot out some sort of greatest hits repertoire, one that would feature ‘The Times They Are a-Changin’’, ‘Mr. Tambourine Man’, ‘Like A Rolling Stone’, ‘All Along The Watchtower’, ‘Lay Lady Lay’, ‘Maggie’s Farm’ and ‘Blowin’ In The Wind’. After all, this is what Dylan has been doing for many, many years now, albeit in versions radically reworked from their original form when he has taken a wanton, some might argue belligerent, scorched earth policy to his sacred back catalogue.

Tonight though only ‘Blowin’ In The Wind’ from that list of songs survives, albeit one that is transformed into a much slower, bluesy lament. Its central anti-war premise, though, remains firmly intact. Instead we are treated here to the most perfectly balanced of sets, both halves split equally by a short intermission and each of which is mostly populated by songs that Dylan has recorded this century. Of the twenty songs performed only four date from the previous millennium. These include the encores of first ‘Blowin’ In The Wind’ and then a truly vitriolic, valedictory reading of ‘Love Sick’. Earlier a quite staggering ‘She Belongs To Me’ and a gorgeous ‘Tangled Up in Blue’ had both remained faithful to their original melody and structure.

The bulk of the set is drawn from Bob Dylan’s last two albums, 2012’s marvellous Tempest – as fine a collection of the by-now familiar blues, folk, country and rockabilly tunes he has released in the past decade – and this year’s Shadows In The Night. The latter is Dylan’s homage to the Great American Songbook and features his reading of 10 old standards previously recorded by, amongst many others, Frank Sinatra. And it is on these classic songs, backed by his exemplary and now firmly established live band, where his voice truly excels.

For so long an apparently ruined instrument – one often reduced to an indecipherable croak – here it is a voice of strength, reason, heartfelt love and impeccable phrasing. His translation of ‘I’m A Fool To Want You’ eschews the wracked desolation of Billie Holiday’s cover on Lady In Satin in favour of resigned acceptance. Similarly the lovelorn ‘The Night We Called It A Day’ emerges from the gloom of its inherent sadness into a much lighter world weary stoicism. Dylan concludes the set proper with ‘Autumn Leaves’. It captures perfectly the feeling of a man who may well now be in the September of his years but for whom the capacity to take artistic risks and still surprise, bedazzle and bewitch us with the results is undoubtedly still very much alive.