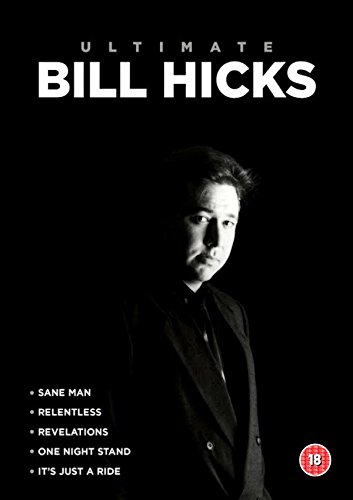 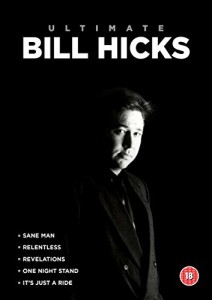 The first time I saw Bill Hicks, he was being interviewed on ‘The Word’ in 1992. Terry Christian, seemingly knowing very little about him, stumbled through an awkward and dull interview where everything Hicks said seemed to go over his head. Perhaps he was distracted by the fact that a drunk Ollie Read was due on shortly, or maybe it was just Christian being the wanker he generally was. Before the show, I had only a little more knowledge of Hicks than Terry seemed to have. I’d read about him in a couple of magazines, but never seen any of his routines, this being the pre-internet age. Despite the best efforts of the host, this short interview piqued my interest sufficiently for me to go and actively seek out Hicks’ work. The first thing I saw was 1992’s ‘Relentless’, recorded at the Montreal comedy festival. What I’d previously read about him, and the interview I’d seen, didn’t even hint at the incendiary talent he had. Raging, obscene, political, confrontational, compassionate and very, very funny. I was hooked straight away. I didn’t know that comedy could be like this. Up until then it had been all Vic and Bob, Monty Python and The Young Ones for me. I remember going into the school the following Monday feeling like I was carrying a secret. There was no way I was going to bother telling my friends about Hicks. They didn’t even get Vic and Bob or Python. There was no way they would have any interest in a sweaty, sweary American bloke chain smoking and talking about politics, sex and America. And frankly, I didn’t want them to know about him. I’d discovered what I thought was the first rock’n’roll comedian, and, in the absence of like-minded contemporaries, I didn’t feel like sharing.

Then, barely a year later, I read that Bill Hicks had died. I hadn’t even heard he was ill, but while working on a TV series for Channel 4, he had been diagnosed with pancreatic cancer. Despite chemotherapy (whilst he was still touring, and writing vociferously), the cancer spread to his liver, and he died on 26th February 1994, aged just 32. The same year, Channel 4 screened ‘It’s Just A Ride’, a documentary combining performance footage with interviews with friends, family and famous fans, and it was a testament to his massive talent, and to what a huge loss he was.

As with any cult figure who dies before their time, Hicks’ legendary status was instantly assured, and it the 21 years since his death, Hicks has been afforded the standing of the likes of Hendrix, Lennon and Cobain by many. But is such status warranted?

For the first time, all of Hicks’ most notable performance films are collected together here, starting with ‘One Night Stand’ from 1989, ‘Sane Man’ from the same year, followed by ‘Relentless’ and ‘Revelations’ from 1992 and 1993 respectively, as well as ‘It’s Just A Ride’. Watching Hicks in action, it’s easy to see why we were all so excited. And it’s more than just nostalgia. A lot of what Hicks was talking about in the early 90’s is still relevant today. Some of it, particularly the stuff about corporate America, is even more so.

Although some of the material is repeated across the various films, it doesn’t soften his power. The most notable change across the films is the growing compassion he displays. The anger and edge was there from the off, and never diminished, but the growing spirituality is noticeable.

There has, in recent years, been something of a mini backlash against Hicks. Or maybe not so much of a backlash, so much as other comedians and critics arguing that Hicks has only achieved the adulation he has because of his early death. They say he was just one of many like-minded comics who emerged in the late 80’s/early 90’s, and that any one of them is just as deserving, but that by dying when he did, Hicks was rocketed to posthumous stardom. I’m no expert on comedy, so this may well be true, but it’s certainly worth remembering that Dennis Leary, who went on to have huge success as an actor and show runner, pretty much made his career by shamelessly plagiarising Bill Hicks. Not just ‘borrowing’ in a way that is accepted amongst comedians, but plain stealing.

Many have come to regard Hicks as a philosopher comedian, a title which may be better bestowed upon the great George Carlin, and there’s no doubt he was one of many hugely talented comedians performing similar material, but there’s no denying Hicks’ place as one of the comedy greats is genuinely deserved. And this collection is a great reminder of that.