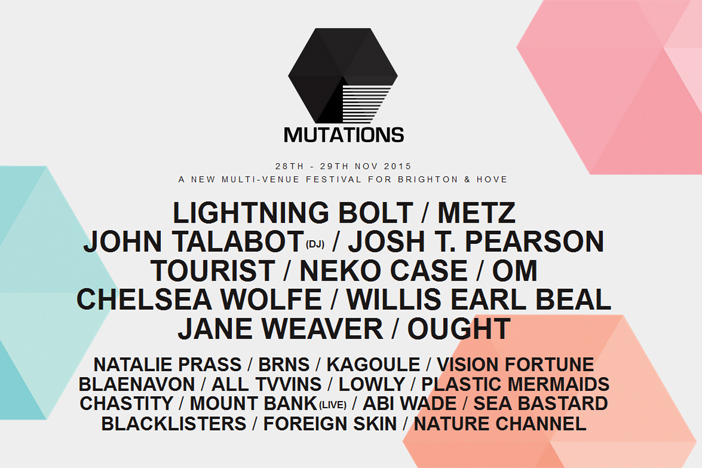 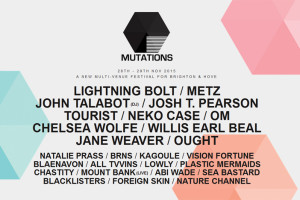 A festival in Brighton conjures up images of ice creams, fish and chips on the beach, being overtaken by skateboarders being pulled by dogs on the prom and generally a nice sunny time. This would have been the case, but Mutations is being held at the end of November. Instead of glorious sun we have a bright, wet windy wintery day. In hindsight this was probably all part of One Inch Badge’s masterplan. Having a festival full of abrasive, cacophonous, unrelenting music wouldn’t really work in the sun, but when you can’t see where the sea ends and the sky starts, and rain is being hurled in your ear it all seems kind of fitting.

Out of the two days Saturday was the more balanced day as there were changes to the texture and tone of the music. Willis Earl Beal with his pitch perfect voice, added some future soul to the proceedings to an otherwise guitar heavy day. Nature Channel blew any leftover Halloween cobwebs out of the Old Market with their rumbustious set. Chastity followed this with a set that reimagined Faith No More as a hardcore band and showed why all their early hype might actually be warranted. Chelsea Wolfe’s heavy sedulous attack on the senses through throbbing bass, pounding drums, chugging guitars and lamenting waul like vocals will remain long after the ringing of her set in everyone’s ears.

The real star of Saturday however was All Saints church. It was here that everything Mutations was about on Saturday culminated. Classical cellist/electronic misfit Abi Ward dazzled an expectant crowd with stark glitchy electronics juxtaposed with warming acoustic cello and violin, and semi pop vocals. Think Sasha Siem being remixed by Digitonal.

After Ward came Josh T. Pearson. The majority of his hour-long set was culled from his 2011 debut album Last of the Country Gentlemen (“Smash Hits” as he called it), new songs (“Future Hits”) and a new project The Two Witnesses with his friend Calvin from Texas that reimagined old hymns in a contemporary style. While his music is heart bracingly honest, punctuated with joyous and hilarious lines like “Normally I’m not this funny. Normally I’m funnier” or “I’m playing the hits as I’m broke”. There is an element of Southern Gothic to Pearson’s storytelling, which coupled with the surroundings made a man in front of me sob. After Pearson, Christopher Owens closed the opening day. This was the only real scheduling problem of the day. When Pearson left the stage, so did the majority of the crowd.

Sunday started much like Saturday, spitting rain and grey skies were the back drop for lo-fi punk upstarts Kagoule, who are living up to their initial hype. The surprise of the day was Merlin Tonto. Imagine Vangelis covering and condensing a Holy Fuck twenty minute pop song about space. Despite sound problems they played one of the best sets of the weekend.

Best Friends and OUGHT brought guitars back to the fore with blistering sets, but after that it was all about keyboards, synths and laptops. Both the Haunt and Patterns shows appeared to be made of lacquered obsidian, and the music they put on clearly was.
Blanck Mass and Foreign Skin‘s sets were a continuous assault of bowel loosening levels of bass, jittering synth loops and a seizure rendering visuals. The Haunt was packed to the rafters, and for the first time all weekend I did question everyone’s safety.

Patterns had more space to move and sit, but due to being in the basement, the sound and bass had nowhere to go, so it just bounced around off the atramentous coloured walls. Upstairs craft fair provided a perfect respite during the breaks and Jane Weaver offered an equally welcome hiatus to the sonic attack. Her set, which was reminiscent of Stereolab/Broadcast at their most psych and playful, was one of the highlights of the day. It showed that challenging music doesn’t always have to be hard hitting. By this time there was a full blown gale whipping Brighton’s seafront and sending late night holidaymakers searching for refuge in the nearest pub and restaurant.

This was nothing compared with what was going on in the Concord 2. The festival came to an end with sets from aggressive noise pioneers Lightning Bolt and Canadian noiseniks METZ. Form Lightning Bolt’s opening salvo it was obvious they weren’t taking any prisoners. Blastbeats were intertwined with hypnotic bass riffs that sounded like Grecian Gods clearing their throats, all the while heavily manipulated vocals slashing their way through the maelstroms of noise. The relentlessness of their set didn’t let up and after a few songs it was clear to see why this duo have been such a pivotal force in underground for two decades, and why they were picked to headline the festival.

While the weather was throwing everything it had at the Concord 2, the noise was drowned out by METZ’s brand of elephantine rock. Their set saw them cull material from both of their albums, as their visceral and explosive set rocked the venue to its knees. Only afterwards, when we stepped outside, did we realise that our ears weren’t still ringing, but it was the gargantuan wind flogging and trouncing Brighton’s front. The crowd pulled their jackets tighter round them, shrugged at the adverse weather and sauntered off home, safe in the knowledge they’d witnessed something that wouldn’t be repeated for a while.

Apart from a few scheduling problems, mainly at All Saints Church on Saturday night, the overall feeling was one of a cohesive and smooth running machine, instead of a new festival trying to find its feet. Last year’s DRILL festival surely helped, but Mutations is a different beast altogether. It can only be a matter of time before Mutations is rivalling the Great Escape as Brighton’s premier festival and its second year is practically all in the bag, minus some behind the scenes shenanigans. Whether the balance will be there for Mutations II will remain to be seen, but if they can construct another line up as forward thinking as this year’s, then we’ll be in for a treat.