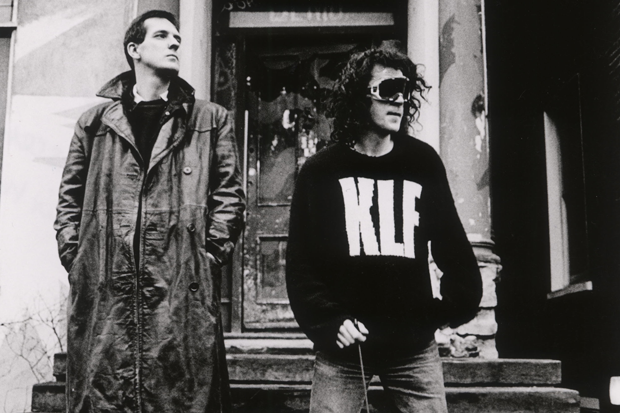 Dear God. Is it really 25 years since The White Room? In order to write this article, I listened to the album again (you’d hope people would do that, rather than writing in a haze of pure nostalgia and rose-tinted Raybans, but how often have you read a review that had nothing to do with what it was meant to be about?) and there’s a number of thoughts that come to mind.

With the hi-jinks and occasional low-shots that Bill Drummond and Jimmy Cauty have got up to over the years, it’s perhaps not surprising that people may have forgotten that what made them famous in the first place was the music. Oh yes. Because one of the things that comes flooding back listening to this album again is how bloody great some of these songs are. ‘What Time Is Love,’ ‘Last Train To Trancentral’ and ‘3AM Eternal’ were deservedly huge hits, the latter reaching no.1. The KLF were one of the most commercially successful bands of the year in 1991. This wasn’t just something for the weekly music press (hard to believe that, at the start of 1991, there were actually still four in Britain), this was an act that was on Top of the Pops, in Smash Hits and on the radio.

In so many ways, The White Room was a product of its time. That’s not to say it’s dated badly, but that the music reflects rave culture in many of its forms, shows how prevalent sampling was (and how increasingly mired in legal battles), and how hip-hop was influencing the mainstream, not just in terms of rapping, but how records were being made and sounding.

That aside, it’s funny that with the pair’s interest in the Illuminati and general, wonderful craziness, the album wasn’t viewed as a concept album. That may be to do with the prevailing orthodoxies of the time, in which concept album = prog(ressive rock) = crap. It was rumoured to be the soundtrack to the film of the same name, though the film never appeared. In true KLF-style, a huge amount of money appeared to have been spent on the film.

At a time when country music wasn’t really on the radar for many music fans in the UK (the term ‘Americana’ was not yet in common currency, which may or may not be connected with the fact that Uncut magazine had yet to be founded), one of the headline grabbing things was that they enlisted the support of Tammy Wynette on the song ‘Justified and Ancient.’ It’s worth bearing in mind that the song which bookends the original album is not the version that became the hit; sung by Black Steel, it’s far more akin to a lullaby.

The KLF ‘retired’ from the music business in 1992 – The White Room is just part of a story that has been covered many times elsewhere. After that they deleted their catalogue in the UK; this was a radical move in an era when the internet was in its infancy. Due to licensing issues over crowd samples, the album is available in various forms around the world but if you want to get your hands on the UK original, it’s off to the second hand shops with you.

The only decent novelty record ever or an excellent exercise in subversion? This No.1 single was most people’s introduction to the KLF, even if they didn’t realise it

This is the original version, not the one that became a hit, and almost entirely instrumental.

In 1989, Kylie and Jason were everywhere (even after she went off with Michael Hutchence). This song seems to be more indebted to Stock, Aitken and Waterman than feels comfortable in 2016…

An entire chillout album, this was very much an album that needed to be heard as a whole. It seems to have more in common with early Pink Floyd and Aphex Twin than the massive pop hits that were just around the corner…

There were numerous versions of this in circulation by this time, this was the one that became the hit, with samples of the MC5 (swearing fuzzed out), and contributions from P.P. Arnold and Ricardo da Force.

Coming out around the time of the first Gulf War, the band uncharacteristically censored themselves and removed the machine gun fire that kicks off their second No.1 hit.

Another month, another massive KLF hit.

If this track tends to be forgotten, it’s possibly because it didn’t come out under the KLF moniker – but still gave them another top 10 hit.

The band rounded off their most successful year by reworking their album’s opening track with vocals from Tammy Wynette.

Even at the time, this was a limited mail-order only release. But the live performance of their collaboration unnerved many – which was exactly what was intended.

The final release under the KLF name, the umpteenth reworking of ‘What Time Is Love’ is arguably the best – and certainly the most fun.

2 thoughts on “From the Crate: KLF – The White Room”