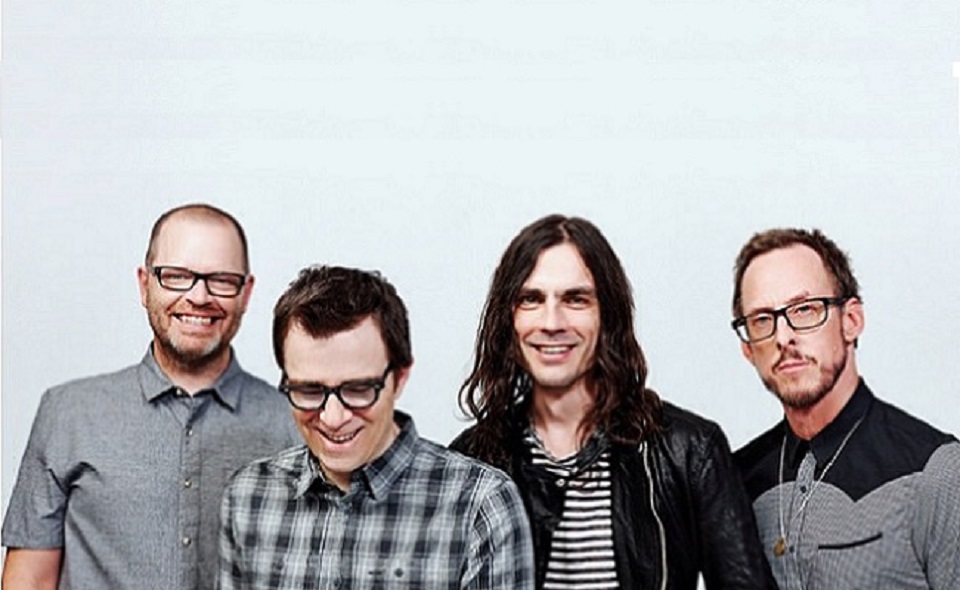 It has been a long time since Weezer touched down in Manchester: 11 years to be precise, when they played at the same venue on the tour promoting that year’s Make Believe album. For a band so popular with U.K. audiences, it is surprising how rarely they play here, but that made the occasion all the more special for the 2,600 or so packed in to the Academy for a show that sold out almost instantly.

On Friday (April 1st), the band released their tenth studio album and the fourth in the series of  eponymous ‘colour-coded’ albums: their 1995 debut was also known as The Blue Album, then there were green and red variants from 2001 and 2008 respectively. White is the colour of choice on this occasion and Weezer (The White Album) returns the band to their classic sound after The Red Album arguably tried to cover a little too much ground stylistically  and sounded somewhat unfocused as a result, despite containing the brilliantly addictive ‘Pork and Beans’ single.

The White Album is a short, sharp and highly commercial set of songs; its ten tracks are done and dusted in 34 minutes and once listened to three or four times, it is hard to believe that you haven’t known the songs all your life. Frontman and songwriter Rivers Cuomo has an extraordinary knack of writing songs that sound like potential singles and can seemingly create killer hooks in his sleep. New single ‘King Of The World’, seemingly an ode to Cuomo’s wife Kyoko, with sweet lyrics such as ‘We could ride a greyhound to Galapagos / And stay for the rest of our lives’.

So to an expectant Sunday night crowd at Manchester Academy. After Dinosaur Pile Up had warmed up the audience with their power-grunge-pop set, Cuomo and co took to the stage underneath their illuminated trademark Weezer flying-W logo and delivered a hit-packed set, with all of their albums except Maladroit and Hurley represented.

The pace of the set was skilfully handled, blending new and old tracks and hardly giving the audience chance to catch breath between the onslaught of Weezer classics. ‘Hash Pipe’ is thrown in early, while the band must have been encouraged that the reaction to tracks from 2014’s best-album-in-years Everything Will Be Alright In The End were greeted with the same fervour as old classics such as ‘Say It Ain’t So’ or the ever popular ‘Island In The Sun’.

The aforementioned ‘Pork and Beans’ is one of many songs that almost brings the house down with its juggernaut of a chorus while guitarist Brian Bell gives Cuomo’s voice a rest when he takes over on vocals for the unexpected treat of early B-side ‘You Gave Your Love To Me Softly’ (its A-side ‘El Scorcho’ had been positively lapped up earlier), while ‘Say It Ain’t So’ is always a firm favourite with the Weezer faithful and does indeed lend itself to a mass singalong.

Leaving the stage following a triumphant rendition of debut single ‘Undone – The Sweater Song’, the band still have yet more aces up their collective sleeves for an encore of biggest hit, (in the UK at least), ‘Beverly Hills’ and their (probably) most famous song, ‘Buddy Holly’.

There are lots of ear-to-ear grins on the way out; Weezer have promised tonight that they will play Manchester more frequently in future and it is doubtful that anyone here tonight will want to pass up the opportunity to see them again.

With ‘The White Album’ and their upcoming high profile festival appearances (the band mention imminent appearances at both Glastonbury and Reading / Leeds tonight), 2016 looks like being a good one for Weezer.