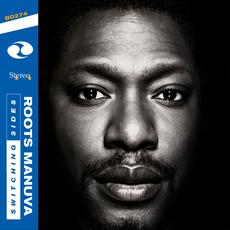 As a Roots Manuva semi-virgin, my experience of listening to him is very limited. In fact, I took this review on to 1. Have a good listen to brand new Roots Manuva and 2. Will it help me understand and like rap music a little more? His work with Leftfield on the Rhythm and Stealth LP is great and his 2001 album Run come save me is amazing. And it’s here that I first heard the absolute classic ‘Witness (1 hope)’ and it’s hilarious accompanying video. Rapping about “beans on toast”, “drowning ten pints of bitter” and saying “frig” instead of “fuck” still makes me beam with pride and joy. So, coming back to his new release for Record Store Day, we have five tracks released on vinyl, two of which have already been heard on his last Bleeds LP.

According to the press release, “Roots Manuva celebrates Record Store Day with yet another cutting-edge vinyl packed with the kind of combination of “bass and verb” which has made him one of the UK’s most essential musical artists. Off the back of the universally-acclaimed Bleeds album, Manuva has cooked up three brand new tracks to go alongside the astounding ‘Crying’ and ‘One Thing’ from that collection, namely ‘Iron shirt’, ‘Body Hot’ and ‘Watch’.

All 5 tracks were produced by Switch under his new production banner With You. With You are Switch and Daouda Leonard (assisted by Stabber), on this outing, with a little help from their
friends Crookers, Toddla T, Coldcut and were written, recorded and produced at his studio in Los Angeles during the Bleeds sessions.” So this release comes with some serious credentials.

‘Iron Shirt‘ kicks off the proceedings with its funky retro vocoder chorus. With its 8-bit bleeps and blips accompanying the lyrics, this is a cracking lead track. is it about the 9-5 grind? I suspect it is. Next we have the aforementioned ‘Crying’ from Bleeds. “A study in paranoia” according to the label. I can’t disagree to be honest. The baby cry samples are very eerie and evoke great unease. I’m not sure whether this was intended, but it’s there and somehow it works perfectly. ‘Body Hot’ is up next and seems to be quite experimental and stripped back compared to the other tracks. It’s quite minimal with a continuous short sample running through it that is either a woman orgasming or a dog barking. I can’t tell which! :-/

Again, ‘Watch’ sees Manuva stripping back and using his great voice as the main instrument. The backing track is twitchy, minimal and almost free style. If I have to single out one track for ‘the lovers out there’, then final track ‘One thing’ is it. It’s slow and low,
and is VERY dance-able and VERY sexy. Again we find him singing about such mundane things as scrambled eggs and Walkers crisps. And finally, as if those five tracks weren’t enough, flip the
vinyl and you’ve got the instrumentals of them all to enjoy too.

The label adds, “’Bleeds’ was hailed as a massive return to form from Rodney Smith, with his recent live shows also widely acclaimed. The “Switching Sides” EP goes further to consolidate the notion that, after six studio albums, this is genuinely an artist who is still capable of leading where others can only follow“.

February and March see him touring Europe and the UK with a new, more focused live show and festival dates are being booked around the world throughout the summer. Every release from one of the great English lyricists is an event to be celebrated and this one most definitely doesn’t buck that trend”.

I am relatively new to rap music, but I think listening to these tracks cements my view that if the lyrics are intelligent, treat all people and genders with the respect they deserve and make one think (or more importantly) dance, then I am happy to have a listen and absorb it.

What makes Roots Manuva stand out is his accessibility and his relatable lyrics. They sometimes run the gamut of the mundane to the fanciful. But life is like that, isn’t it? It’s often boring and sometimes just needs to be tolerated until the next exciting thing comes along! What a great release for RSD. More Roots Manuva please!

B5. One Thing (Instrumental)