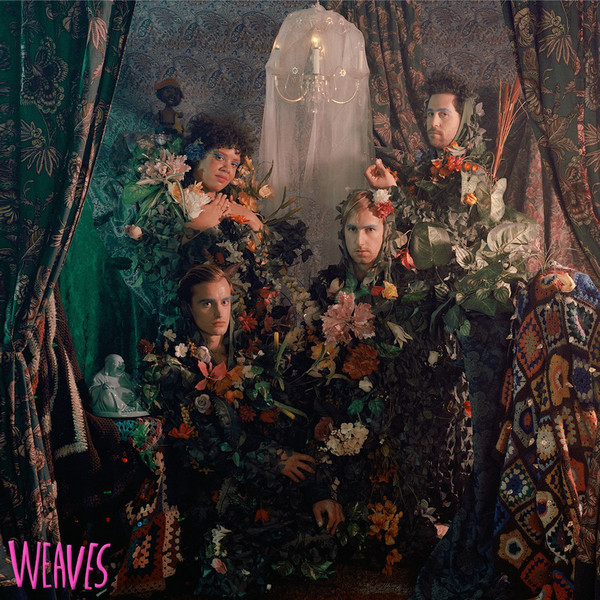 Last year, in an attempt to scramble out of a Zayn-shaped thundercloud, One Direction released one of their final singles, ‘Drag Me Down.’  Despite the defiant, confident lyrics, the rather flat production made it a pretty underwhelming affair, signalling the end of the road for one of the world’s biggest boy bands.  That’s where Toronto quartet Weaves step in.  They covered the song late in 2015, giving the track some much needed punch by injecting it with gutsy riffs and Jasmyn Burke’s enthralling vocals.  More than anything though, the cover showed that Weaves were a band unafraid to step into the realms of pure pop while still being about as DIY as they come.

It’s a line they continue to tread on their debut album.  Even from the opening, squalling chords you know this isn’t your average indie-rock record.  Despite being nearly a year old, ‘Tick’ is still thoroughly intoxicating.  Seemingly composed of randomly smashed together elements – only really tied together by an extremely tight rhythm section – it’s an infectious earworm despite its ramshackle aesthetic.  ‘Candy’ contains crushing grunge riffs in its bridge and borrows Pixies’ famous loud-quiet-loud structure but also plays with the genre by adding a bit of synth and very warped brass.  Elsewhere, ‘One More’ is a short, frenetic DIY number with jangle-pop elements that’s stupidly infectious, while ‘Shithole’ is a slower alt rock tune vaguely reminiscent of Pavement.

Burke just adds to the inordinate amounts of fun with her vocal performances.  While on the surface she fits the mould of a typical slacker-rock singer, especially as her voice lilts on the likes of the downbeat ‘Eagle,’ but elsewhere her voice bends into some crazy shapes.  On ‘Birds & Bees’ she lets her vocals tumble almost comically at the end of each chorus and nearly goads the guitar riffs into reaching as high a pitch as she can, while on ‘Coo Coo’ her melodic voice is just strained enough to mimic the craziness she’s singing about.  If the rhythms and riffs weren’t so malleable and infectious themselves, Burke would steal the show.

Listening to the best tracks on this album leave you feeling dizzyingly high.  Unfortunately, with every high there’s a comedown.  Well, kind of.  ‘Sentence’ comes across like part two of ‘Tick’ due to its quick-fire, jangly melodies, only marginally more restrained.  Closer ‘Stress’ returns to the heavy, grunge guitars and stretches chords out to the extreme, probably trying to represent pressure but ending up a little too plodding.  Meanwhile ‘Two Oceans’ and ‘Human’ are both memorable but are also fairly conventional alt-rock numbers, which is almost a bit of a let-down after hearing the inventiveness of other tracks.  These songs aren’t by any means poor; they’re far from being filler.  Compared to the record’s bewilderingly good highlights, though, they just seem a touch too conservative.

Trust a singular band like Weaves to fall victim to such a strange phenomenon.  At some points on this record, the band prove that they’re perfectly capable of making a very solid, enjoyable alt-rock tune that other groups would still be jealous of.  Yet it’s when they’re being more adventurous than anyone else would dare, throwing everything but the kitchen sink at the listener, this album is a thrilling roller-coaster ride.  Too bad it has some of those annoying going up parts.