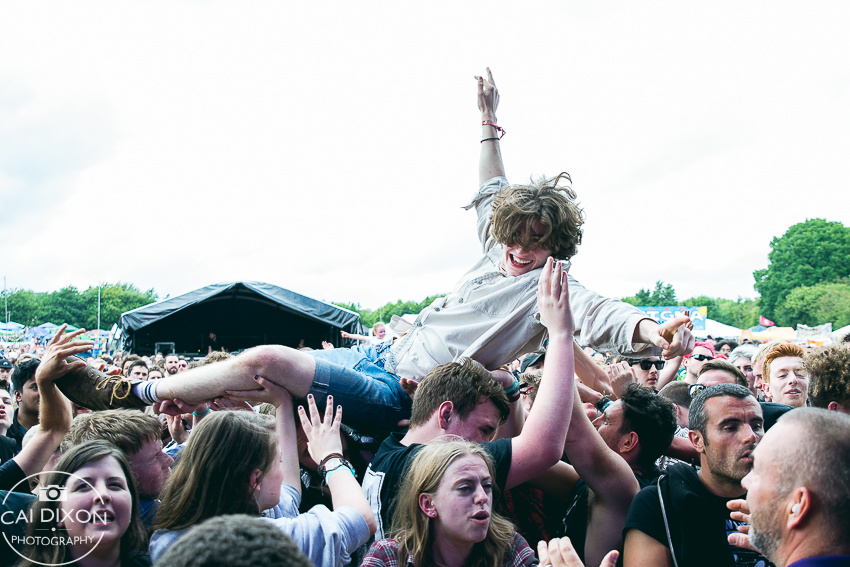 The Xcerts’ grunge punk kicks things off with the first mass sing-alongs of the weekend for the likes of ‘Shaking in the Water’. It’s a short trip down to the beautiful Forest Sessions stage, literally a clearing in the woods towards the edge of the farm that houses the festival. Dave Mcpherson, in flat cap and jumper, looks more like he’s going golfing than playing his songs of self-pity and heartbreak. It’s far from his only set of the weekend as well, cropping up to play covers sets all weekend. And So I Watch You From Afar prove far more interesting, from the fanfare of ‘BEAUTIFULUNIVERSEMASTERCHAMPION’‘s fist-pumping party riffs to the heavy metal highlight of ‘Wasps’.

There’s a tantalising secret special guest on the small Axiom stage. Having played most years, it’s little surprise when Frank Turner arrives, although his decision to play his album England Take My Bones is odd. It’s not the only way he seems to have misread the mood. The unfortunate use of the phrase “all in this together” and introducing a song as being “about the little guy telling the big guy to get fucked” feels ill judged. He calls out the ugly racist aftermath of Brexit, but his music is perhaps more suited to the 52%.

“Now we’ve got that vote out of the way, England’s future is in the hands of The Bronx” declares Matt Caughthran by way of intro to the brilliant ‘Shitty Future’. He calls for slam dancers down the front for a blistering version of ‘Outlaws’ and hollers his way through ‘False Alarm’ entirely in the crowd. With his throat-tearing screams and the band’s buzz-saw riffs the cobwebs are well and truly blown away.

As the masses are still emerging on Friday, John Coffey dedicate the thrashing hardcore of ‘No House For Thee’ to “refugees who drown in the ocean for no fucking reason”. Singer David Achter de Molen decides to crowd surf for the entire song, and although the crowd’s pretty sparse they’re enthusiastic. Slightly more suited to the early hour, She Makes War somehow manages to do her sample pedal tap dance of the spellbinding ‘Delete’ with a crutch following a broken foot. The crescendo of looped vocals and loudhailer siren marks it as a mesmerising peak of a charming set.

Kagoule grow in confidence with every gig. ‘Mike’ and ‘Gush’ are muscular, the latter getting the crowd moving with its powerful outro. Their set is peppered with new songs, to the extent that they start touting for people to be in the video for forthcoming single ‘Magnifier’. ‘It Knows It’ is a massive closer that leaves us excited for new material very soon. Dinosaur Pile-Up spark a fight between two inflatable tyrannosaurus rexes in the crowd. One of them ends up crowd surfing to ‘Friend of Mine’ alongside a man with a cardboard box on his head. A snippet of Weezer‘s ‘Say It Ain’t So’ leads us to the huge closer ’11:11’ topping a memorable set.

Whether or not you like Neck Deep will probably depend on whether or not you like Blink 182, because they steal a lot of their ideas. At one point they literally quote from Blink live album The Mark, Tom and Travis Show which is beyond tribute really. The banner beneath the drum rider reads “generic pop punk”, so at least they’re aware of it. The Ghost Riders in the Sky are a world away from guitarist Steph Carter’s former band Gallows. Their heady blues rock is the perfect antidote to Neck Deep’s sugary sweetness.  Singer Gillian Carter (his wife) may be small in stature but she stalks the little Neu! stage like she owns it. The closer is described as a “slow one” and it is, until it explodes into colour. Gillian leaves the stage as the rest of the band thrash out the huge ending. Brilliant.

Saturday, and a kid in ear defenders charges at a man dressed as a dinosaur at the main stage. A man in a three-piece suit and trilby stands next to us eating breakfast. The St Pierre Snake Invasion toss a plastic bottle of whiskey to the crowd and insist on it disappearing by the end of their set. Fortunately their scorched earth hardcore is the ultimate hangover cure. One thing’s for sure, you won’t hear ‘If the Only Way is Essex You Can Kill Me Now’ at V Festival.
Itch from The King Blues strums his ukulele at the Forest stage and, with the birdsong in the trees it’s a bit cutesy but his heart’s in the right place. Between songs his poems are anti-capitalist, anti-fascist and anti-racist and he finishes by requesting spare sanitary products and leftover tins of food for a local food bank. Much of his charm is lost in the full band set later but their ska punk is more successful on darker stuff like ‘Off With Their Heads’, dedicated of course to Cameron, Farage and Johnson.

Turns out the man in the suit from earlier is Jamie Lenman who leads us through a covers set of Beatles, Queen and Nirvana songs as well as a, erm, mash-up of the Neighbours and Home and Away theme tunes. Lenman plays another set of his own songs later, bringing the likes of Arcane Roots and St Pierre Snake Invasion on at various points including for the brilliant ‘A Day in the Life’. As you may expect at a festival with a campsite named after his former band Reuben, he looks like he’s having the time of his life.

There’s not much of a crowd for Ash to begin with but the set is front loaded with classics like ‘Girl from Mars’ and ‘Jack Names the Planets’ soon fill the arena. There’s no let up despite the newer and less well known material, but any band would be delighted with a closing run of ‘Orpheus’, ‘Shining Light’ and ‘Burn Baby Burn’. They’re quite simply one of the best singles bands of the last 20 years and at this stage of their career their sheer energy and the strength of their back catalogue is undeniable.

Dennis Lyxzen, frontman of Swedish hardcore punk legends Refused, struts around the stage throwing some serious Mick Jagger shapes to ‘The Shape of Punk to Come’. In his tight red suit, swinging his mic around, Lyxzen certainly seems “all dressed up with somewhere to go”. The frantic riffs come thick and fast, Lyxzen is in and out of the crowd, a gazebo appears above the heads of the pit. It’s confusing, it’s exciting, it’s everything we hoped it would be.

‘Servants of Death’ is brilliantly funky but the biggest reactions are reserved for the ‘…Shape…’ classics like the unmistakeable staccato riff of ‘Refused Are Fucking Dead’. ‘Summerholidays vs Punkroutine’’s spine-tingling chorus might declare that they’d “Rather be forgotten/Than remembered for giving in” but neither of those outcomes seems likely tonight. Lyxzen takes a moment to mention that although about 260 musicians have played at the festival only eight of them have been female. He suggests that within two years 25% of the musicians playing should be female and within five years, 50%. It’s a reasonable suggestion, especially considering how festivals can be a model for a new, fairer society. They won’t be without equality and diversity onstage. With that line drawn in the sand comes the inevitable, incredible closer ‘New Noise’. On this evidence Refused have never been further from fucking dead. A lot of festivals can learn from 2000trees’ example; namely, sticking to your guns, doing what you do very, very well and booking one of the best bands in the world to close your festival. You can’t argue with that.