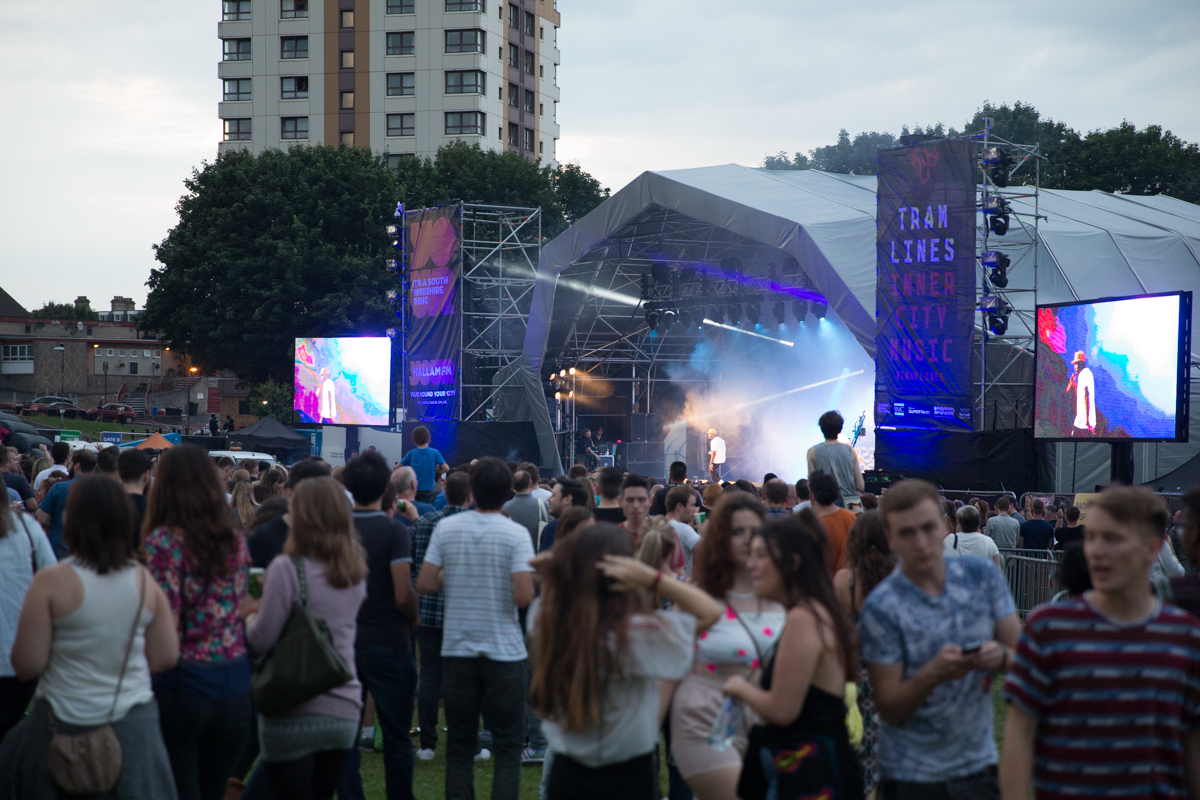 Last year Sheffield’s Tramlines festival ­beefed up its capacity with a new main stage at Ponderosa Park, with mixed results. Out-of-centre location, lack of toilets and a funfair drowning out the sound left a lot to be desired. This year the organisers promised an improved Ponderosa and a full size old main spot Devonshire Green, which all sounded promising.

At first impression the only evidence of any improvement seems to be the signage around the city centre. At Ponderosa we are greeted by the sight of a man dressed as a hotdog being thrown out. Despite an over-zealous frisking and attempts at intimidation from security, Ponderosa proves to be a much better experience than last year. More toilets and more bar staff mean there are barely any queues and no noisy funfair either. So far so good.

The Dandy Warhols get things off to a psychedelic start with ‘Not If You Were the Last Junkie on Earth’. A mid-set one-two of ‘We Used to be Friends’ and ‘Bohemian Like You’ just proves how the former’s “woah-oh oh”s trump the latter’s “woo hoo hoo”s any day.

“Ladies and gentlemen my name is Dizzee fucking Rascal!” Dizzee has recently been playing debut album Boy in da Corner in full; and although we’re not treated to it tonight, it’s a career-spanning set. Most artists would struggle to top grime classics ‘Fix Up Look Sharp’ and ‘Jus A Rascal’ but the alternating noise and bass of ‘Sirens’ show it to be hugely underrated. ‘Bassline Junkie’ heralds the pop pyrotechnics of ‘Dance Wiv Me’ and ‘Holiday’. Ribbons are shot into the air for the well-deserved encore of ‘Bonkers’. This is why Dizzee is one of the most successful independent British artists of all time.

A hastily flagged cab whisks us to the Picturehouse Social for Peace and Love Barbershop Muhammed Ali – all hips, basslines and leather. As they finish, disintegrating away, someone says there weren’t enough people in the room to appreciate the spectacle. He’s right, there’s probably five times as many people in the bar listening to Drenge DJ.

Saturday starts with another taxi to the wrong entrance of the Folk Forest. Families enjoy the sunshine in the arts market. The contrast in stages is nice but the fact that it’s more than a mile from the city centre is inescapable. Where the main stage access has improved significantly through a partnership with Stagecoach that created a festival discount on the tram, the Folk Forest is only really accessible by bus.

Living Body are a supergroup of sorts which helps them plough through sound issues. They include Jeff T Smith, aka Juffage and Katy Harkin from Sky Larkin, but are sans-Harkin for their first gig. Alice Rowan of Mayshe Mayshe shines, coaxing brass and strings from her synth, playing guitar and generating weird drones while the rest of the band tune up. When they settle in their folky indie rock is eminently lovely.

At City Hall FOES are advertised as being outside but they’re playing in a comedy club at the back of the hall. No one seems to know of any other band playing the venue today, so after some confusion we find Sly and the Family Drone playing the beautiful ballroom. Or at least we try.  Security are checking bags with forensic attention and giving additional wristbands for drinks, rather than have the bar staff check ID.  Eventually, we get in.  Sly and Family Drone set up in the middle of the light-up dancefloor. Their ground shaking harsh noise is punctuated by handing out their drums and taking their clothes off. It’s intense and exhilarating, so it’s with real frustration that we emerge to discover that security have been circling throughout. It’s aggressive music, sure, but the atmosphere is communal.

Kate Jackson’s return to her former hometown starts with hushed guitar and gently hammered cymbals, before launching into pounding single ‘Metropolis’. Her band The Wrong Moves are super tight and she dances round the stage like she was born to be there. Album British Road Movies hasn’t been out long but there’s already a newbie in the set, pop stormer ‘The Westerlies’. It’s good to have her back.

Back at the main stage, Kelis opens with a brassy ‘Millionaire’. The fuller sound than the original’s minimal electronica works well live. It’s an early highlight in a set front-loaded with slower, newer stuff from recent album Food. ‘Bounce’ gets the first big cheer of the night, but rather than capitalising on this burst of energy, there’s a mash-up of the intros of ‘Smells Like Teen Spirit’ and ‘I Feel Love’ with ‘Caught Out There’ and ‘Got Your Money’. It’s a tease that makes ‘Trick Me’ and a salsa-infused ‘Milkshake’ all the sweeter. The 808 kick and fizz of fan favourite ‘Acapella’ is the only way to end the night.

People are stood in the street watching Paws through an open window of Bungalows and Bears. They keep asking for a place to stay for the night and seem to be making up set list on the fly. Before ‘Someone New’ drummer Josh Swinney is trying to find a stick that won’t snap in half and by the end he’s lost two cymbals. They end with guitarist Phillip Taylor launching his guitar into the drumkit. It’s still feeding back as we head out into the night.

Sunday again begins at the Folk Forest. Thomas Truax climbs over the fence and runs through the crowd playing. He has various contraptions playing noisy blues, the Hornicator (a horn that he sings into and samples various bits of ramshackle percussion) and Mother Superior (a rudimentary drum machine made with pram wheels). It’s an experience in a very, very good way and a nice contrast to Jane Weaver‘s swirling electronic pop.

Perhaps an indication of Sunday line up’s weakness, halfway through the Jurassic 5‘s set the queue for Ponderosa is around the block.  The multitude of people waiting for Catfish and the Bottlemen seems equally depressing. We move on to witness Public Service Broadcasting’s arrival to air raid sirens. Their odd brand of retro futurism doesn’t lend itself to chat, but the weird pre-recorded crowd banter is pleasingly quirky. A glitterball Sputnik is raised into the air but it’s not until ‘Go!’ that things really, erm, get going. They’re joined onstage by a dancing cosmonaut for the superhero funk of ‘Gagarin’ , and the show ends with ‘Everest’, a power ballad to Edmund Hillary.

The propulsive space rock of Moon Duo fills the Cathedral. The flickering projections against the Cathedral’s vaulted walls are mesmerising.  It’s almost a disappointment when one song ends and another begins.  It feels like it should all blur into one, but then each intermission snaps you back into the real world. When the whole band lock into a groove it’s a transcendent and satisfyingly intense way to end a patchy weekend.

Tramlines have some issues to address.  Whether they continue to increase in capacity or focus on improvements is yet to be seen.  Less heavy-handed security and less spread-out venues would make this festival a much more enjoyable event.