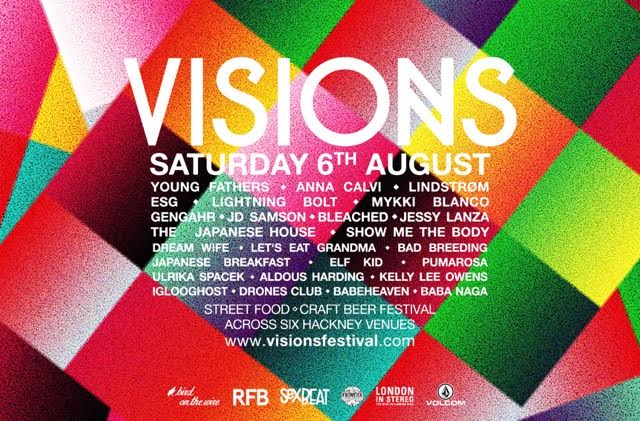 Visions festival, held at a number of key venues around the London Fields area of East London, has steadily been establishing itself as a cornerstone of the summer, especially for those eager to catch new acts ahead of the curve.

This year’s line up is probably its most ambitious yet, spanning the underground’s finest and taking in its widest array of musical styles too, from hardcore to hip-hop, electronica and indie sounds. Here’s a selection of ten acts on the bill that GIITTV can’t wait to catch:

Fresh from an extensive jaunt on the road with Massive Attack, Edinburgh trio Young Fathers combine elements of classic R&B, hip-hop, rock and leftfield electronica to make unsettling, paranoid soundtracks that nevertheless manage to wrap themselves around your consciousness like the most stubborn earworms. Not shy of making controversial statements – their last album White Men Are Black Men Too even gave their record label the jitters until the band finally persuaded them – they’re one of the most radical bands to ever leapfrog their way into the British mainstream music scene.

Signed to the ever cool Domino, nominated for the Mercury Music Prize and then appointed Morrissey‘s semi-permanent support act of choice, Anna Calvi‘s rise feels utterly irresistible. For the uninitiated, she packs a fearsome vocal style that clocks in somewhere between Sioxsie Sioux and Polly Harvey. Her passion-filled odes are driven home with a slashing Telecaster and a sonic brutalism tempered with a dash of firey flamenco magic.

American noise rockers Lightning Bolt are famous for their chaotic, intense live shows. Often prefering to play among their audience rather than on a stage, this Rhode Island duo count minimalist guru Philip Glass and cosmic jazz nutter Sun Ra among their ‘compositional influences’. Their recordings certainly have elements of minimalism and otherwordly experimentalism, but in the main they’re a gooey mass of grungy guitars set to drone and an onslaught of vicious drums.

They played the opening night of the legendary Hacienda, and even contributed to the birth of hip-hop when Grandmaster Flash sampled one of their early recordings. But the New York funk punk pioneers have slowly but steadily risen from cult status to serious contenders with a live show that calls on the community vibe of the New York block parties. Their appearance at James Lavelle‘s Meltdown festival on the South Bank two years ago was many people’s highlight of the fortnight-long programme. Their Visions slot is doubtless destined for equally high levels of praise.

Post-op transsexual Blanco messes with the traditions of hip-hop by discussing gender politics in her lyrics. But it’s the super tough delivery and the icy, minimal beats that accompany them that really make any performance – and they are rare in the UK – completely unmissable occasions. A sold out Village Underground show on her last visit to these shores two years ago ended in a mass stage invasion. You can safely expect something suitably anarchic at Visions too.

Formed by childhood friends Rosa Walton and Jenny Hollingworth, Let’s Eat Grandma released their debut album, I, Gemini through Transgressive Records in June (when else?!) of this year. Their sound is at times eerie and haunted, using cold electronics and the spectral qualities of their voices, while at others it boasts a playful but still unsettling, childlike innocence.

One third of the veteran purveyors of envelope-pushing leftfield downbeat Spacek, Ulrika Spacek showcased a more guitar orientated side on their album Paranoia. Expect hazy, fuzzy torch songs with plenty of slacker Velvet Underground attitude but also an element of heartbroken girl group glamour that Lou Reed et al could never have attained even if they tried.

Hans-Peter Lindstrøm is the leading light of the third generation of the Norwegian electronica scene, following in the footsteps of the Levi’s advert soundtracking Biosphere and the chart-climbing Royksopp. He’s released three albums and numerous EPs via his own label Feedelity, often in collaboration with the equally revered Prins Thomas. Dubbing his style Oslo Disco, inhabiting the more sophisticated end of the melodic house spectrum, his tracks are multi-layered and atmospheric. Owing as much to the symphonic sensibilities of classical composition as to the glitterball-spinning influence of classic disco, house and techno.

Earning the honour of being Zane Lowe’s last ever Hottest Record on Radio 1 is no mean feat in itself, but for Amber Bain aka The Japanese House it was only the start. That track (‘Still’) provoked plenty of debate about who was responsible for it – the mysterious name helped, as did having a voice so androgynous there was even widesapread disagreement in many online forums about whether she was male or female. Not fully out in the open – she decided the mystery was becoming an unwelcome distraction – she’s busied herself making unconventional pop releases. Like her debut EP Pools to Bathe In, that showcase an equal love for the oozing melody and harmony of the Beach Boys and the deconstruction of leftfield synth noise.

Named after a 50s movie starring Cary Grant, the three members of Dream Wife hail from Brighton, London and Reykjavik respectively, and met when they were art students in Brighton. Rakel Mjöll (lead vocals), Alice Go (guitar, vocals) and Bella Podpadec (bass, vocals) actually created a “fake girl band”1 as an art project for an exhibition. But their combination of punk attitude and 60s garage glam was instantly too popular to be left in the realms of the imaginary. Live bookings in the UK, Canada and a deal with Enter Records soon followed, and as their slot at Visions will no doubt prove, they’re definitely for real.

For the full line up and tickets, visit their official site at visionsfestival.com