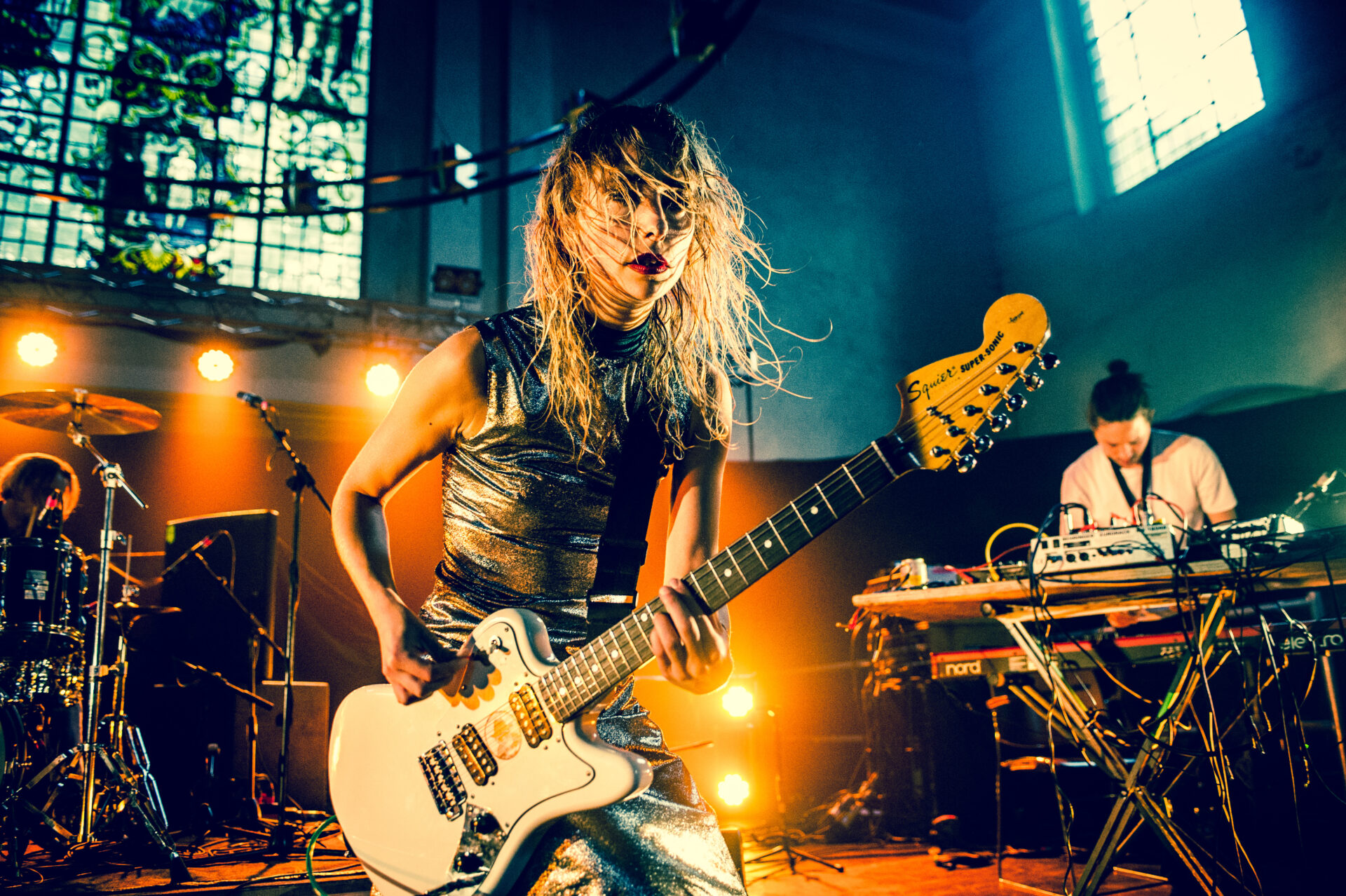 Given that the average price to see one medium sized band these days regularly tops £40, you have to congratulate the organisers of Visions. For that price they’ve managed to fill five venues with the hottest sounds, staying several steps ahead of what is an over-saturated, over-commercialised festival scene that promises unique experiences and offers homogeneous line ups.

That’s why, despite many other events competing for punters’ attention, Visions is doing brisk trade. There are plenty of gig goers in evidence making the trip up and down Hackney’s Mare Street in search of their visions of the future of music. There’s a fair crowd in the spectacular St John church to see Pumarosa open up proceedings. They make a suitably spiritual noise too, songs like ‘Priestess’ and ‘Lions Den’ bearing an epic, almost Biblical presence . Their singer Isabel Munoz-Newsome, resplendent in an ankle length silver dress, throws Tai Chi moves between songs, elicits weird noises from her Stratocaster by scraping it with a drumstick and projects her vocals with a similar power to Florence Welch. While they’re not quite the finished article yet they’re definitely a prospect with plenty of promise for the future.

Back in Mangle, which bears more than a passing resemblance to an underground car park with added nightclub visuals, Ulrika Spacek whip up some tranced-out space rock vibes. They have a wall of nicely fuzzy guitars and a great drummer who drives the sound forward with confident urgency. Their songs may blur from one into another but they soon gain a very favourable reaction.

But nowhere near as favourable as the near-hysteria that meets Wesley Gonzalez in the Moth Club. With its glitter-covered walls and gold-shred curtains, the venue is the perfect setting for Gonzalez’s ironic, Elvis-in-Vegas-style revue. But while the show itself might be soaked in irony – it’s probably best described as a weird remake of ‘Freaky Friday’ where Jarvis Cocker wakes up in Meatloaf’s body – the songs themselves, particularly the Scott Walker-influenced ‘In Amsterdam’, are bursting with genuine sincerity. Wesley leaves the room via the audience, the sweat breaching his blue shirt, and almost everyone present wants to shake his hand. Never mind hardcore, this is pure, enthralling showbiz.

Back in the church, Let’s Eat Grandma prove to be a real revelation. Resembling the scary twins from The Shining having reached early adulthood, they charm and/or terrify their audience with their cleverly naive synthpop, staring out the chatterers in the crowd and dropping to the floor in unison whenever an instrumental break presents itself in the music.

After that it’s a long walk – or a quick bus ride for the more prepared punters among us – down to Bethnal Green, where the Oval Space venue is baking in the afternoon sun. Jessy Lanza is finishing off a set of pummelling technopop, but a fair few are taking refuge from the greenhouse conditions by hanging out on the stairs outside or taking in a cooling drink on the terrace, with a picturesque view of the gasworks as a backdrop.

But we’re really here for Mykki Blanco who fully lives up to all our expectations. Taking to the audience early on, sprinting the length of the bar at the back of the room, clambering onto the decks and hanging from the lighting rig, it’s a consummate rock ‘n’ roll performance. One that’s backed up with some awesome tunes – former single ‘Wavvy’ is a particular highlight – and some witty rapping on everything from broken hearts to the collapse of America. There are snipes about Brexit but praise for our British bubble and squeak, all delivered with the outsider bravado of a heavily tattooed man in a dress and a wig, although the latter is torn off as things come to a gloriously violent climax.

A very tough act to follow, but our choice of headliners is Young Fathers (sadly clashing with the equally desirable Anna Calvi and Lightning Bolt) who are more than up to the job. Even a familiarity with their two excellent albums is scant preparation for witnessing the trio live, as they launch themselves into their catalogue with an unexpected venom and righteous anger. On the fifth anniversary of the riots, this is surely the closest musical representation of that explosion of anger to take to a stage, as the soulful beauty collides with thundering African beats and wailing synthesisers. The thorny subject matter of many of their songs fuels their righteous momentum too: while early single ‘Get Up’ gets most of the now packed venue into dancing action, the vicious rendition of ‘Shame’ is probably the evening’s utter standout. The way the material from their second offering White Men Are Black People Too seems to utterly dispense with traditional songwriting form, hitting choruses that are never returned to or careering off at unexpected angles, leaves no room for complacency on the listener’s part – you literally have to take in every second as it flies by. It’s completely breathtaking, even disturbingly vivid at times.

True rock ‘n’ roll, in its widest form, has always been about the outsider, and from Blanco to Gonzalez and Young Fathers, this year’s Visions line up did more to celebrate and congratulate that underrated maverick. Visionary stuff indeed – we’ll be back next year without a doubt.