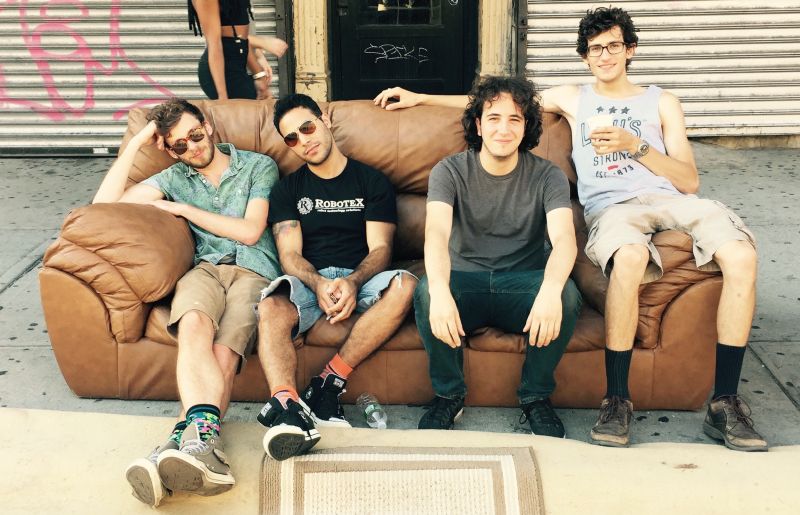 Brooklyn, psych-pop quartet Color Tongue‘s recently released their debut LP ‘Sprouts’, today we have the video premiere for the song ‘Be Me A Faucet’ , a delightfully meditative strung out strum with starry eye-d vocals that repeats the refrain “I’m fine right here.’ Before soaring into life affirming crescendo territory in its final portion upon a sea of fuzzy guitars, keyboard sweeps, skywards harmonies and clattering percussion, its fondly redolent of early Flaming Lips or Animal Collective. Watch the video below, via the medium of what looks like old school hand held camcorder film: it takes us on a trip through the forest in search of a unknown snail-like creature, building to a quite unexpected but grin inducing conclusion.

“Their recently released debut LP Sprouts was recorded entirely by the group themselves in their shared practice space. The album’s spiky acid-pop is at once an accurate recreation of Color Tongue’s frenetic live sets and a vivid exploration of their imaginative songwriting capabilities, deftly blending absurdist lyrical themes with technicolor soundscapes. Sprouts, the debut record from Color Tongue, is due out August 12th, 2016. Self-released digitally and available on cassette via Weiner records. Here’s Colour Tongue’s Eddie Kuspiel talking about the recording process:

“We recorded sprouts in just a few days in the summer of 2015. George and I (Eddie) bought some used mics and an 8 channel soundboard off the internet. George went to audio engineering school so he knew how to set up the mics. I think we did pretty much all of the music in one or two takes. I bet you can hear some bleed from other bands practicing if you listen close enough. The songs were all written from some older ideas we had brought to the guys and had worked out at our live shows that year playing live in Brooklyn and Manhattan.”

We took all the instrumental tracks and brought them back to our apartment. George’s room is the one room in the apartment with a lot of great natural light, and really cool hanging plants so it seemed fitting to do the vocals in there (sprouts…you get it). That’s were we really started messing around with some fun ideas like alien voices (you can hear our manager Macy), the last track you can hear kids playing in the street, and then sporadically throughout the record you hear our dog Thunder either playing with us because we were getting too into singing and screaming or him hearing the doorbell ring and going nuts. In any case we decided to leave that in because it’s a pretty honest reflection of the situations we had to make the album under.

We recorded and mixed everything ourselves in our practice space and my (George’s) bedroom in Bushwick. Everything was mastered by Adam Straney at Breakpoint Mastering except for “Stitches” which was done by Joe Lambert.”