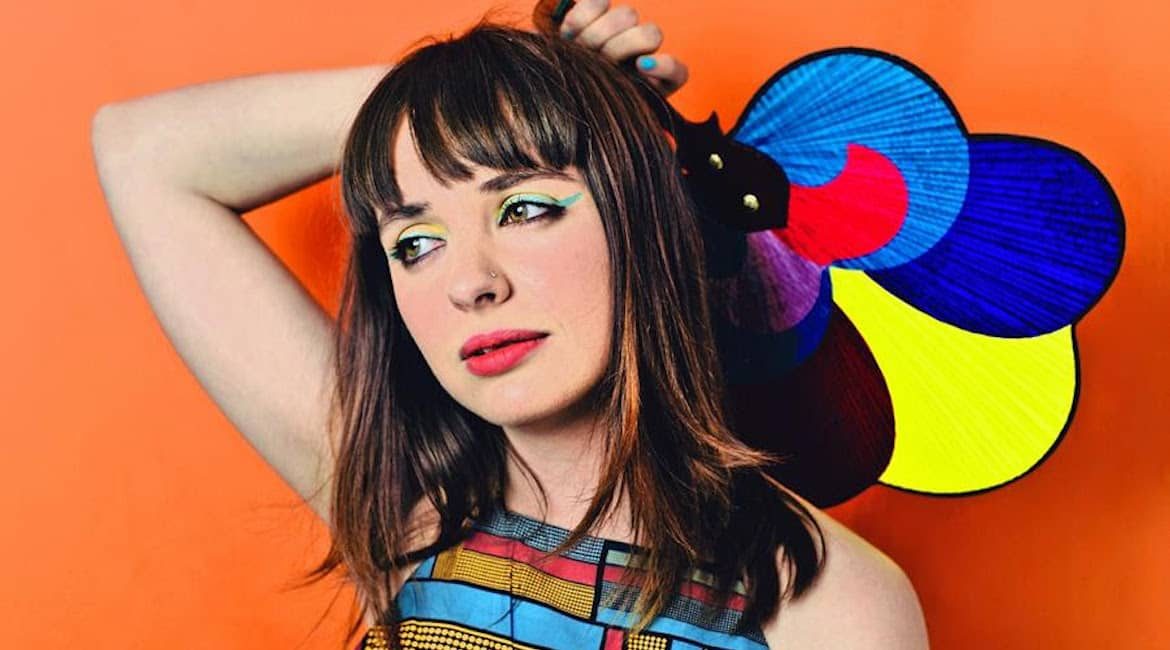 Back in 2014 we watched singer, multi-instrumentalist and Welsh Music Prize winner Georgia Ruth play the main Mountain stage at Green Man. Although she wasn’t part of this year’s festival bill we couldn’t resist the opportunity to talk to her about her new album Fossil Scale, the current music scene in Wales and who she thinks should win this year’s Welsh Music Prize.

Last time I saw you at Green Man you played the main stage. How does it feel being here as a punter?

Amazing.  I first came to Green Man ten years ago. It was 2006 and I just finished my A-levels. My friend said: “There’s this amazing festival. We have to go!”  And there was definitely something about it. I thought: “My god, I have to play this festival.”  Years later I actually played it, but it’s just such a great place to come as a punter.  You can see so much and have the best time.  It’s great!

Your new album, Fossil Scale, is out very soon. You started it in Caernarfon but moved several times.  What’s the story behind it?

We started recording in Bryn Derwen Studio, which is where I recorded the last record with David Wrench.  A couple of weeks into the sessions they announced they were selling the studio.  I thought “Oh my god!” I have such an emotional connection with it because it’s kind of the only place I’d ever really recorded; so it was a real comfort zone and when I found out I was shattered.  There was a process of “Well, OK, where are we going to go next?”  So, yes, the album’s basically been pieced together in about three or four different other places.  We went to London, Cardiff and then we finished it off in a place just on the border between Pembrokeshire and Carmarthenshire, in a studio called Mwnci (Monkey), where we did most of the final legwork with a producer/recording engineer Marta Salogni.

How do you think it’s affected your album?  Did you have a different idea of what it was going to sound like when you first started recording it?

Definitely. It evolved.  Each studio that we went to had its own personality and its own imagery, so obviously what we did in each new place was really different. And I really liked that.  By the time we finished it I liked that you could hear all these different places.  It reflected the fact that I’d been moving around geographically.  I think if you’d given me the option of finishing it all in Bryn Derwen Studio, initially I would have said, “Oh yeah, obviously, I wanna do it all in one place”; but as things transpired, this changing of places reflected my life.  So, yeah, it was good that it happened like that.

And you’ve now moved from Caernarfon to Cardiff.  How are you finding life in Cardiff?

Great. I lived in Cardiff before moving to Caernarfon, so I knew what to expect going back; but a lot of the people I’d known the first time I lived in Cardiff had moved by the time I came back.  It was a process of re-integrating a little bit.  The great thing about Cardiff is that it’s always had this amazing community of musicians and the musicians were all still there.  By the time we got back they were all still doing their thing.  It’s just a great place to be as a musician.  It’s my favourite place and I’m really glad to be back.

Listening to the album, there is quite a lot going on there.  What do you have in mind in terms of your live set up? Who’s going to be in your band?

It’s going to be really interesting. I knew that this was going to be a challenge to do this record live, so at the moment I’m in the process of planning it all out.  I’m definitely going to have the core band – guitar, drums and bass – that was in the studio sessions.  Those guys – Dafydd (Hughes), Iwan (Hughes), Aled (Hughes) –  are brothers.  One of them happens to be my husband now but they’re all definitely going to be playing live.  Then it’s all the other, the extra stuff that happens – lots more synths and Meilyr (Jones) singing.

I’ve heard somewhere that you went to school with Meilyr.  Is it true?

Yeah, tiny world.  Tiny Welsh music world.  He was the year above me in the school and we were really good friends.  I remember when they started Radio Luxembourg and it turned into Race Horses.  It’s been so great to see his trajectory. It’s lovely.

In many way your music is a reflection of pristine beauty and nature of Wales but at the same time there are quite a lot of other influences on this new record.

Yeah, definitely.  Suhail (Yusuf Khan) was actually playing on the main stage today as part of Yorkston Thorne Khan.  He plays sarangi on the record.  I met him about three years ago in India.  We were on the project that the British Council had organised and I’d never been to India before.  I’d listened to a little bit of Indian music. I didn’t know much about it and I’d never seen the instrument that he was playing.  Getting that opportunity to play with him and hear that instrument in practice made me realise that I wanted to hear more of it.  When he said, “Oh yeah, I’ll play on your record”, I was so thrilled!  It think it’s brought a real expansive sound to it and I couldn’t have done on my own.

But you have songs in Welsh on the new album.  Is it something important to you?

Really important.  I mean my home life wasn’t Welsh-speaking. Then we moved to West Wales and the primary school I attended was Welsh, so I learnt it when I was four.  From that moment I was Welsh and I was Welsh speaking.  I don’t feel most comfortable composing in the Welsh language.  I don’t know if it is because of that process of learning it.  I’ve never quite felt like I can fully express myself but it’s something that I really want to do in the future. I’d love to do a record that was entirely in Welsh.  I’d love to reach that point within the language where I felt that I can do a record.

You have a show on BBC Cymru, is that right?

Every Tuesday night.  It’s just three hours of music.  It’s a really exciting time within Welsh-language music.  There are so many people that I think are pioneering the kind of confidence that I wish I had within the language. Look at Gwenno!  The confidence of that record! It is so viable, and beautiful, and powerful, and political.  I think there are so many bands that have that feeling at the moment.  I think it’s really inspiring to get to do the radio show when there is so much going on within Wales!

So who do you think is going to win the Welsh Music Prize this year?

I think Meilyr should win it. I back him to win it, obviously. These kinds of competitions are so subjective but it’s the record (2013, Moshi Moshi) that’s been the bravest in terms of doing just what he wants to do – just being bold, and beautiful, and not being afraid of using references that are just special to him. I think it’s an album that’s not trying to grasp for approval.  It just does what it wants to do.  Yeah, I hope he wins it.  It’ll be brilliant!

Fossil Scale is out on Navigator Records on 7th October 2016.  Pre-order your copy HERE.