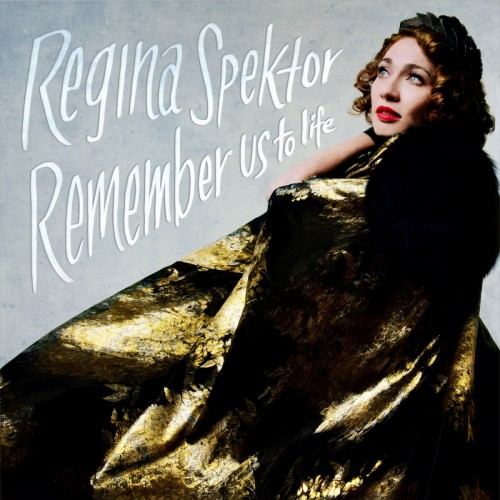 Continiuity can be a great strength for a long-running musician. It allows their fans to feel emotionally connected to their work for a lengthy time and to grow simultaneously with the artist. Everybody’s favourite parable novelist Regina Spektor harbours this skill, without ever coming across as stale. Despite disappearing for four years and having a child, Spektor rejects the temptation to write transparently about motherhood and suddenly copy new influences on 7th album Remember Us To Life, which will be a delight for fans who were already mesmerised by her established quirks and lust for more of the same.

Firstly, her flexibility with her two core musical elements; the piano and her voice are still magnificent. As pleasant and delightful as her piano is on sequential ballads ‘Black and White’ and ‘The Light’, it’s the dark keys that are more memorable and conjure up dramatic moods and tension that still intrigue and astound. ‘Tornadoland’ and The Trappier and The Furrier’ include these and also noticeably ultilize shivering strings to create ominous chaos.

This is because Spektor has been involved in string arranging this time than ever before, encouraged by first time collaborator Leo Abrahams – an English producer who was involved in the soundtracks to Hunger and The Lovely Bones. Abrahams pushed Regina Spektor deeper into the world of strings. At one point it’s so magical it teleports listeners into the land of Edward Scissorhands on ‘Sellers of Flowers’. Rather more curiously, Spektor was introduced by Abrahams to processed piano, which allowed for more oscillating experimentation with her beloved instrument. Athough this is not immediately evident, meticulous ears will notice waves of flanging on tracks such as the beautiful and intoxicating classical-crossover ‘Obsolete’  – particularly fans of Rachel Zeffira’s 2012 record The Deserters will be blown away this track.

Her vocals have always been wondrously distinctive yet diverse (sometimes sweet, sometimes veraciously strong) and the attitude and flavour have consistently set the individual tone in her tracks –  something that reached its maximum potential when hyperventilating on the suffocation-premised ‘Open’ from predecessor What We Saw From The Cheap Seats. The most interesting vocal exercises on the current album are on ‘Trappier and The Furrier’ – which she fiercely narrates about social commentary to the point of paralysing anxiety, and on ‘Small Bill$’ where she adopts a rapping tone to hip-hop rhythms and lyrics about the consequence of careless economics.

Spektor’s most lovable characteristic hasn’t vanished yet- the second and third person adventures of riddles and discoveries. ‘Grand Hotel’  is a good specimen to show her evocative imagination is still present. It’s overloaded with magnetising imagery and colourful characters as it takes the listener to a ghostly hospitality establishment that can easily exist within Stephen King’s The Shining: “There is a tunnel that leads straight to hell, but no one comes up for the souls anymore.”

Recently Spektor admitted in interviews that her writing method is unique because the lyrics are unleashed out of a stored up subconsciousness of ideas rather than an instant reflection of her surroundings, meaning that whatever age or time an album of hers is written, it’s still likely to be just as spontaneously surreal in it’s journey. That’s great news! As it means that whether she’s 21 (when her debut 11:11 came out), 36 (at present) or in her late forties, whimsicality will still be in her DNA.