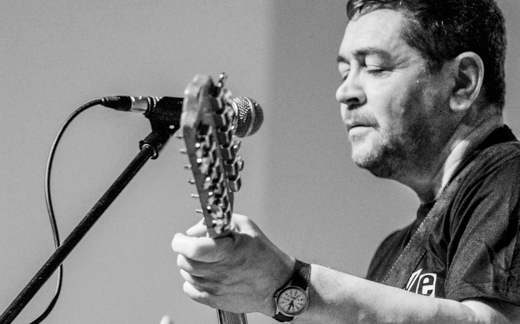 When the NME put Mick Head on their cover in 1999 and called him “THE BEST SONGWRITER IN BRITAIN!”, for once their hyperbole was not misplaced. Head’s 35-year career in music has been a story of missed opportunities, undeserved obscurity, drug addiction and bad luck, but most of all of a singular, unbending musical vision and integrity that has earned him a small but passionate, obsessive following.

The word “genius” is overused, in music as elsewhere, but this time, no other word suffices. In January 2017, Mick releases his first album for eleven long years, so to whet your appetite, here are eleven wonderful introductions to the Magical World of Mr Michael Head…

In 1982, Virgin signed Head’s first band for a then astronomical £150,000, figuring they could well have another Haircut 100/Orange Juice/Aztec Camera on their hands, a theory that effortlessly catchy, breezy pop tunes like ‘You’ll Start a War‘ did nothing to disprove. The Palies’ two studio albums were chock full of potential hits like this, but, then as now, the listening public refused to bite.

The Palies weren’t just your classic early 80s dungaree-wearing guitar pop outfit, and debut album Pacific Street contained numerous hints of Head’s future expansive musical vision. ‘Beyond Friday’s Field‘ begins with a lengthy jazz intro, which segues into trippy sitar and bossanova rhythms, before giving it the full Bacharach. One of the best – and most underrated – songs of Head’s career.

Shack’s debut album Zilch featured great songs hampered by an overly fussy, often limp Ian Broudie production; nevertheless several tracks still shine, none more so than this yearning tale of loss. It may be dated by its lyrics – “10:15 – The Cure – playing by your side…BASF of a day with you” – but it shows Head’s songwriting starting to scale new heights.

Shack’s bad luck begins with their Waterpistol album – recorded in 1991, its master tapes subsequently destroyed in a studio fire, the only copy left in a rental car in the US by producer Chris Allison, it didn’t see the light of day until 1995. To be fair, 1995 was the perfect time to put out an album of anthemic, Northern, psychedelic indie rock, of which ‘Dragonfly’ is a prime example, but once again the world wouldn’t listen.

Critically adored 1997 album The Magical World of the Strands, another Shack album in all but name, saw Head & brother John in thrall to inspirations such as Arthur Lee (with whom they’d toured in the mid-90s) and Nick Drake. On ‘X Hits the Spot’, one of the album’s many highlights, Head is disarmingly candid about his post-Waterpistol heroin addiction (“Hey what’s happened to all my clothes? What’s happened to all my furniture?”)

1999 should’ve been Shack’s year – that NME cover, a major label, and this single getting lots of radio play. Bloody brilliant isn’t it? Everything – the production, the arrangement, the musicianship, the chorus, the string section, the guitar solo, the ending – is simply perfect. But again, the clotheared public gave it a wide berth as it limped to 44 in the charts, whilst the accompanying album – the wonderful HMS Fable – garnered euphoric reviews and struggled up to 25. Sometimes you just despair.

Sometimes Shack’s lack of success was down to bad choices, and ‘Oscar’, wonderful though it is, is one of them. Shack’s critical and commercial reputation was at an all-time high in 1999-2000 (though it’s all relative of course) so how did they choose to capitalise on it? By putting out a single about a disabled man moving to Amsterdam to get free, state-provided sex with a prostitute. That it was set to one of Head’s catchiest tunes held little sway with record buyers.

In 2003, music promoter Simon Moran launched his own record label just so he could put out Shack’s Here’s Tom With the Weather album (Noel Gallagher did the same for 2006’s On the Corner of Miles & Gil). God bless you Mr Moran, because Here’s Tom… remains my favourite album of this century. Woozy psychedelic genius from soup to nuts, with ‘Byrds Turn to Stone’, a nostalgic look back at the Head brothers’ formative musical years (“Learnin’ to play the guitar, one for you, one for me/Who’d be the first one to learn all the tricks by Mr Lee?/Stuck in me ma’s old back room with endless cups of tea…”), providing a kind of potted history of Cosmic Scouserdom.

Cups of tea figure again on this classic 2006 tune, possibly the most British love song of all time – “My cup of tea doesn’t taste the same when she’s with me”. That soaring, vertiginous chorus shows how effortless Head’s songwriting genius had now become; the fact that, as a single, it reached the giddy heights of 126 in the chart, was depressingly predictable.

This undoubted highlight of the Corner of Miles & Gil album shows Head’s wonderful knack of finding beauty in squalor, turning a story of waiting in a decrepit house for the dope to arrive (“Shelley’s not here, Shell’s gone to pay/And all we’ve got left, empty boxes, burnt out, faulty, scattered round”) into a thing of breathtaking beauty, particularly when brother John adds his harmonies to the chorus. See also ‘Streets of Kenny’ and ‘Lend’s Some Dough‘ from HMS Fable.

Head’s work with Scouse supergroup the Red Elastic Band (including ex-Shack and Cast guitarist Pete Wilkinson, and former Pale Fountains and James trumpeter Andy Diagram) has seen his Love obsession really take full flight, and expectations that 2017 album Goodbye Senor Pussycat could just be his Forever Changes are high. Head’s most recent release finds him avoiding a world that’s falling apart, hiding in the dark, headphones on, listening to the Velvet Underground. I do that too Mick, only I’m usually listening to you.