Celebrating its 10th year, festival Swn 2016 certainly proved to be an improvement on last year’s edition. Based in the heart of Cardiff this multi venue festival felt re-energised, by a bill crammed with great Welsh music old and new, with a smattering of emerging acts from outside of the principality. With the addition of a Swn museum, a plethora of food, and even a computer operated keytar contraption, it wasn’t just about the music either.

Add to that packed venues on Friday and Saturday even Sunday’s less populated audiences were treated to some marvellous emerging music. So we can safely proclaim Swn’s tenth birthday a triumph. There were so many highlights that we couldn’t get around to mentioning them all, but here are some of our picks from this year’s event. 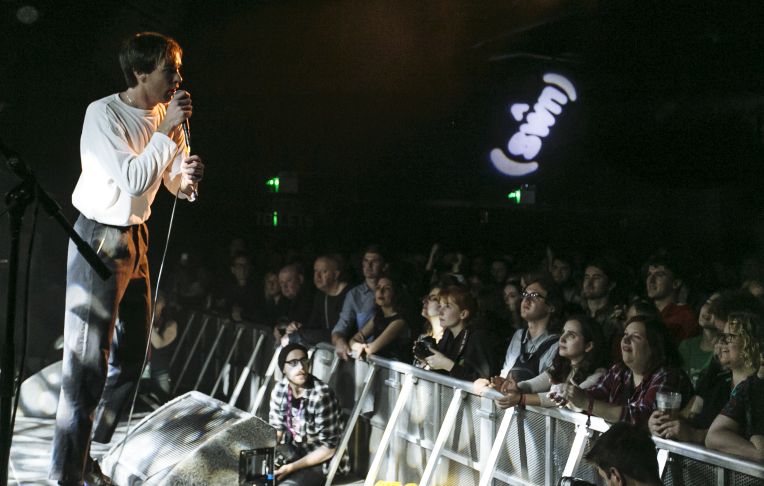 Opening the festivities this year was returning Welsh hero Meilyr Jones with a headline performance at Cardiff’s new 1000 capacity Tramshed venue located in Grangetown. He’s enjoyed a great year with warmly received sets at various festivals throughout the year, and with his excellent debut album “2013” all of these factors point to Jones being the man of the hour, and tonight one can see why his music and performance style is inspiring such devotion.

A tall elegant man, and a captivating performer, Jones takes us on a journey through the gamut of his artful theatrical pop laced with pianos and brass. Superb moments include “How to recognise a work of art” with a beat that has echoes of Primal Scream’s Rocks and Iggy’s Lust for Life. An electric live performer, Jones stands fist clenched, his body alive with electricity and head consumed by the music. There’s a burst of David Bowie‘s Rebel Rebel for the intro of ‘Strange/Emotional” before we are launched into this psych pop song whose booming crescendos recall Syd Barrett. We are also treated the wonderful “Refugees” that sees Jones take to the piano for this most meditative of ballads, with its instruction to “switch off your television” and the promise that there’s “work to be done” with all eyes on him one can understand why. Jones’s croon may have echoes of Bryan Ferry and Jarvis, but in truth it sounds utterly individual, his notes honey dipped in a North Walian tone that’s consumed by the mind and heart of an artist. Its a great way to kick off Swn’s 10th year.

Reminding one of Bikini Kill with their powerful, muscular brand of alt-grrrl-rock, Estrons provide able support to Meilyr Jones as they are drafted in as a last minute replacement for Spring King in the Tramshed on the Friday. Then they appeared over at the Moon on the Saturday, phew! Well done guys and girls!

One half of Trwbador, Angharad Van Rijswijk is a hypnotic performer with a mesmerising use of imaginative synth patterns and idiosyncratic melodies reflecting fragments of childhood memory: to delight and entice. Her backdrop gives her set another dimension in the small confines of Gwdi-Hw Cafe bar(or the Owl venue as some would have it), ACUU could certainly be one to watch in the next year for fans of unique welsh pop music…

Glaswegian performer Martha Ffion comes backed with her band on the Turnstile stage in Buffalo bar, delivering a sumptuous brand of shimmering retro pop. Songs like ‘So Long’ and ‘Go’ ache with a swooning heartbreak that somehow puts one in mind of the bittersweet jangle of Camera Obscura and the suss of Sharon Van Etten; it’s a blast of simple pure melodic songwriting supplanted between more adventurous soundscapes of the wonderfully off beat R Seiliog who follows her this evening.

Now a resident of LA, Cate Le Bon is an off kilter artist to say the least, all spindly guitars and rickety rhythm sections, but tonight headlining Turnstile’s evening of artists in Buffalo Bar she shows a poise of pure class. Bedecked in white, looking like an extra from Star Trek, Le Bon races through a set of delights from her albums ‘Crab Day’ and the superlative ‘Mug Museum’. From the surreal psych bounds of ‘Wonderful’ to the stately ‘Are you With Me Now?’ she holds a healthy packed crowd in her rapture.

Helmed by twin talents Ashley Cooke(he of Pulco) and Anndy Fung(he of Mandy, No Thees No Ess and Cymbient), Derrero reunite in the Moon club on Saturday afternoon, for a blast of their wondrous brand of Americana tinged alt-pop to file alongside Grandaddy. Radar Intruder is my personal favourite from this charming bunch, who might qualify as one of Wales’s most under appreciated bands. 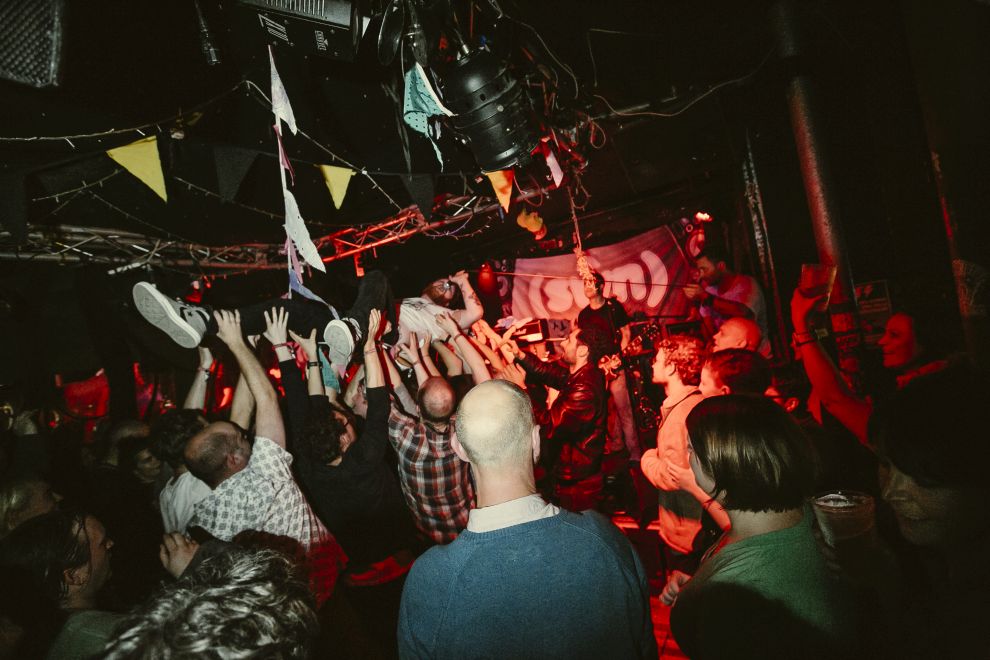 Mclusky* are a ‘surprise’ headliner over in the Moon club on Saturday evening, in celebration of Swn’s 10th year, and for the folks at Music Box, adding a counter point to fellow returnees Melys over in the Big Top. Causing a ruckus as people swell this sweaty dark box of a venue, braking into a riot of moshing and crowd surfing, as Falco barks out orders in his inimitable and unmistakable style!

Imagine if you had a dream and in that dream you were being serenaded by both Joanna Newsome and Kate Bush…Well welcome to the reality of Isle of White’s Rhain. In Four Bars venue in the early afternoon this Sunday this  exciting emerging artist with a spellbinding voice. Flanked by her band, sitting behind a piano, her remarkable vocal tone cutting a swathe through each one of her notes.Intoxicating and wonderful, she really is onto something quite stirring, uplifting and with infinite promise.

Cardiff’s Ani Glass is a coming force in great Welsh pop; disregard her history in a pop band put together by OMD‘s Andy Mclusky or even her period in the Pippettes. Her brand of bilingual electro pop is enchanting, instructive and wonderful, from her sublime self styled entry to Eurovision ‘Little Things’ whose bombastic chorus sees her vocals soar as her body and hands snake to the beat and her fluttering synths. While recent single ‘Y Ddawns’(which translates as The Dance) has an industrial underbelly that’s inflected by Ani’s wonderful vocal, which is an ode to the tragic destruction of Welsh industry and culture.

Rounding off Sunday’s festivities with a rousing set of their glam flecked art rock at Clwb Ifor Back are Dream Wife. These girls have got IT, and then some. Melodic, powerful, fierce and feministic with hints of early Blondie and a sneer of Elastica, their set is jam packed with tunes and a continental sneer, fit pumping beats, leaping glee and smiles. Plus tunes, tons of tunes! Hey Heartbreaker! this one is for the kids!