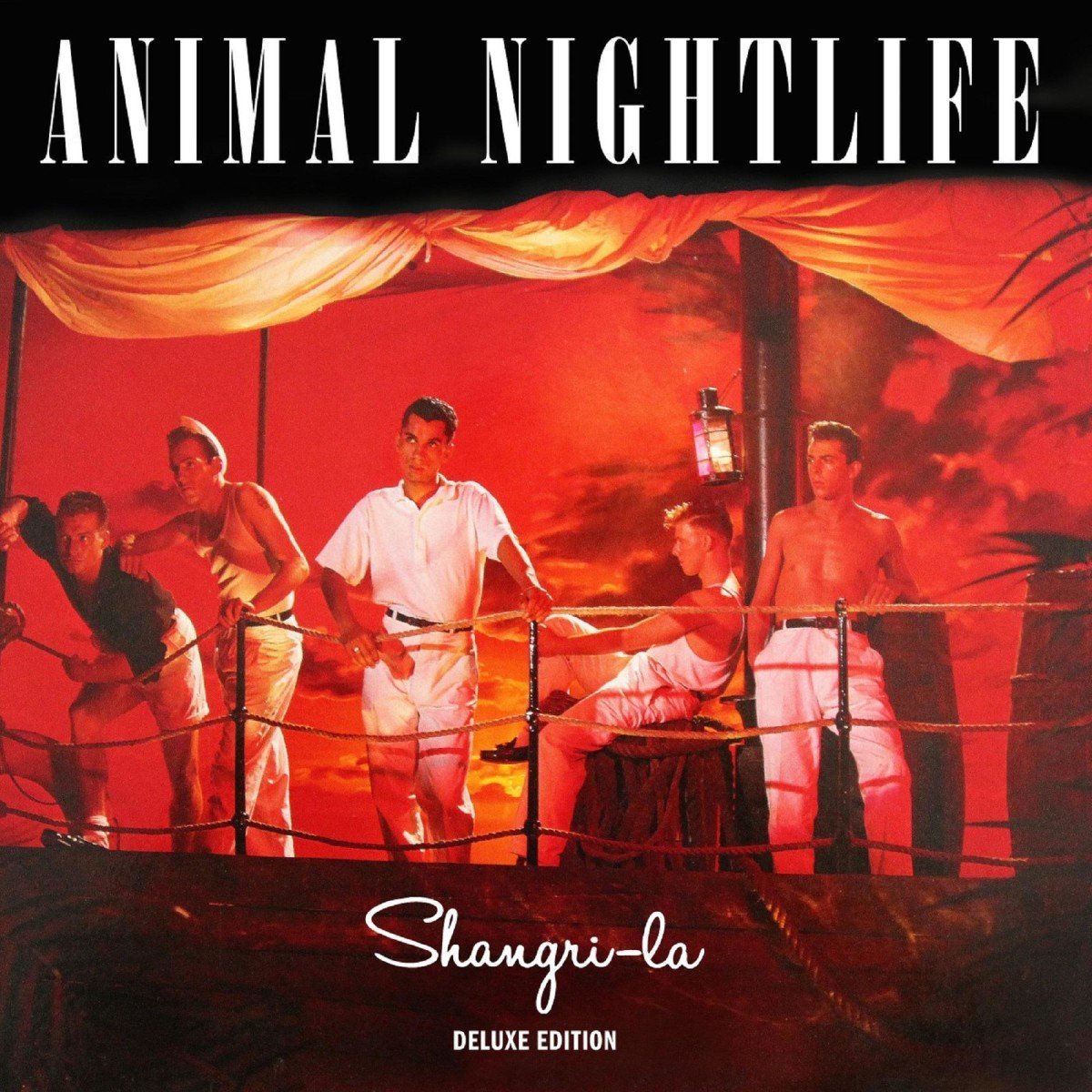 As the sleeve notes in the accompanying booklet of this deluxe re-issue tell us, “Animal Nightlife should have been big. In Andy Polaris they had a singer with a golden croon and a Hollywood presence“. So why WEREN’T they big? After all, most people my age would remember the Londoners’ 1984 chart botherer (of two) that was the irresistible smooth funk/jazz classic ‘Mr Solitaire‘, and the almost as successful follow up (albeit a re-issue of their debut single) less than a year later, the masterful ‘Love Is Just The Great Pretender‘. They seemed to indicate there were great things on the horizon, but Shangri-la, upon its initial release, inexplicably limped meekly to number 36 on the UK singles chart with little fanfare. One very minor dent on the Top 75 singles chart and a 1988 album, Lush Life, that severely bombed later, and the band went their separate ways, downbeat, disconsolate, and disillusioned.

The band themselves largely blame the lacklustre production of Lenny White on that second album and the excessive gap between those two records for their untimely demise, and are quick to point out that they were no whipping boys of the music world, having secured an eight week residency at Ronnie Scott’s in their heyday, amassing a large, loyal fanbase along the way. It isn’t hard to see why, when you listen to Shangri-La all these years later.

Opening with the sophisticated pop of another single, the infectious ‘Native Boy‘, Shangri-la in its entirety is possibly one of the easiest listens of the entire decade, sharing both a political and musical ethos with Paul Weller’s band of the time, The Style Council. Indeed, Weller himself was a fan, and even provided backing vocals on their biggest hit (included here in its 12″ format on the second “bonus” disc). And the easy swing of ‘Waiting For The Bait To Bite‘, which follows, is as good an example of great songwriting in that genre as you could find.

But I have my own theory as to why Animal Nightlife did not quite enjoy the commercial breakthrough they were looking for – they were too ‘pop’ for the alternative crowd and too leftfield for the Top 40 connoisseurs. That kind of glossy sheen would serve The Human League well in 1986 on their smash single and album Human and Crash respectively, but I fear it may have detracted from the fact that, for those who were paying attention, their lyrics were often peppered with intelligent observations on society and personal relationships. Don’t believe me? Just try and Google the lyrics for ANY of their songs, even the more sizeable hits. See? Bugger all comes up. And on the flipside, the likes of Spandau Ballet were transforming themselves from well respected purveyors of electro-pop into sickly saccharine balladeers, embracing the dubious legacy of Thatcher’s Britain; Animal Nightlife, by contrast, were a staunchly Labour collective who were merely trying to provide some glitz and glamour as an escape from the overbearing greyness of the previous ten years or so. Just listen to the Pink Panther style saxophone of instrumental ‘Basic Ingredients‘ and try not to lose yourself momentarily in another world, a better world even, where everyone is equal and conflict is unheard of.

Sure, it’s far from perfect, and some of the tracks here get lost in that excessively shiny eighties lustre, but really that is its only downfall. You can’t fault the compositions; all you can do is shake your head and contemplate what might have been.